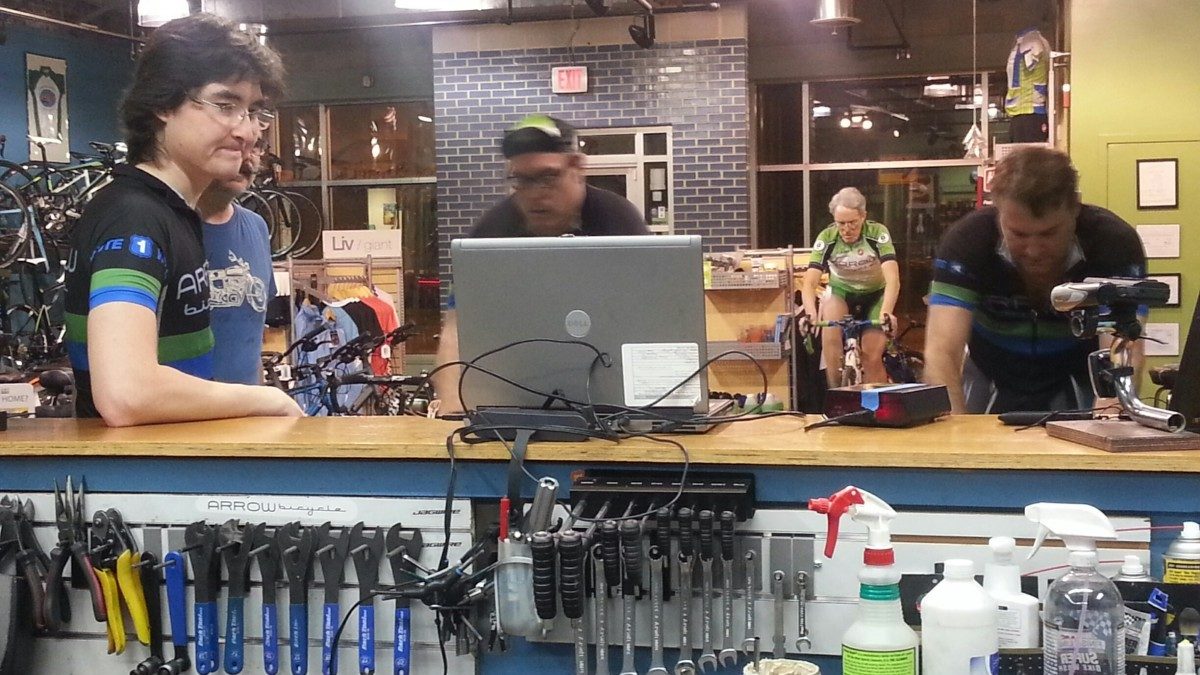 Two sets of rollers are set up, each set connected to its own respective sensor which feed into a laptop, which allows two cyclists to race a set distance. Photo courtesy Scarlett Salem.
Business

BY SCARLETT SALEM — The average cyclist is likely to avoid the roads when confronted by plummeting temperatures, snow, and ice. But as an alternative to locking the bike away until the spring, Arrow Bicycle, located on Route 1 across from Franklin’s, offers indoor training to keep cyclists in shape — and no — it is not a spin class.

Arrow Bicycle hosts a weekly rollers night during the cold season, during which devices called “trainers,” securely lock bikes in place so that participants can cycle indoors. Unlike a spin class, where bikes are stationary, a set of rollers does not afford riders the luxury of stability. Rollers test a cyclist’s balance and cadence (peddling speed), and they require more attention and focus than a spin class would.

Usually, beginners keep something within arm’s reach for balance like a wall or a chair.

“When I first started out [on rollers], I rode with one hand on a table until I got the hang of it,” said Arrow Bicycle co-owner and Hyattsville resident Chris Davidson.

“I am facing my fear. That’s why I do it,” said College Park Resident and regular rollers night participant, Jeff Travis. “I relearn every year.”

On rollers night, rollers and trainers are set up at various locations in the shop, and cyclists peddle to music played over the shop’s speakers. Some bikes are stationed in the storefront window, occasionally surprising passersby.

But the real action happens in the back of the shop. Two sets of rollers are set up, each connected to a sensor which feeds into a laptop, allowing two cyclists to race a set distance.

“Cycling is a community and not a one-on-one sport. People who ride together, talk,” said Davidson. “In the winter, you can’t have a week night ride in the dark.”

When Militello transitioned to Capitol Hill Bikes in 2001, the Route 1 Velo Club went with him, and rollers night continued there. Chris Davidson began working alongside Militello in 2005.

“… The best thing about it [is] that everyone of all levels can ride their bikes together, chat, and hang out at night in the middle of winter. It’s super fun and a lot of times people hang out afterwards for food and beer,” said Brandon Lumm, who started attending in 1999 and commutes from Potomac.

Attendees ride for an hour or slightly more. After riding, participants stay to socialize. “People go to spin class,” said Militello. “This combines spin class with competition and beer drinking.”

Militello said that rollers night “builds camaraderie … Everyone suffers together. It’s easier to motivate yourself with others around.”

Currently, anywhere from five to 15 riders regularly attend. Participants come from all over the Washington, D.C. metro area, though the event still struggles to attract local residents.

“We would love to see more people from the community come out for this,” Militello said.

There is no cost for attending, and no experience is required. Arrow has a few rollers and trainers available for people to use on rollers night, but attendees are encouraged to bring their own set in case the store runs out.

Militello said that rollers cost from $200 to $500 (for a “good” set), and he indicated that cheaper rollers were less fun to work with. Trainers, he said, cost $150 for a basic model to $1,500 for models that measure power output.

He advised riders to use a smooth tire with rollers or trainers, because it provides an easier and quieter ride. “The vibration from a knobby tire on a trainer, or on rollers would … render your body numb after 10 minutes,” Militello said.

For announcements on Arrow Bicycle’s Rollers Nights, check out their Facebook page at https://www.facebook.com/arrowbicycle

Nature Nearby: Dragons and damsels in Magruder Park