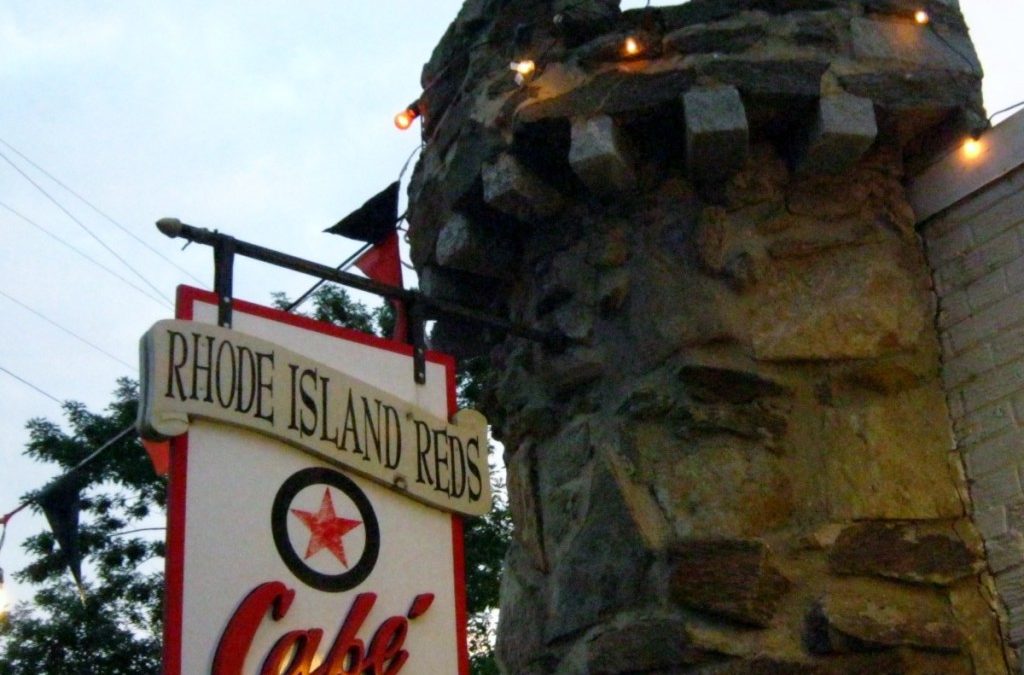 BY SUSIE CURRIE — After nearly three years, Rhode Island Reds Café has closed its doors. But for the right price, a new owner could open them.
Citing the desire for more time with his wife and two sons, ages 7 and 12, owner Christopher Brophy made the announcement in a characteristically terse yet rambling e-mail to customers on June 14. In it, he listed several ways to grow the business, adding that it “could earn 65 thou a year in the right hands.”

Naming a price of $46,200, Brophy wrote that he would “liquidate rather than accept too low an offer.” A Craigslist ad posted on June 30, the last day of operations, had the price at $45,000.
“I’ve had lots of nibbles,” he says, but he’s still waiting for the right one – along with his agents at the Hyattsville-based Halloran & Associates law firm, who at press time had not returned HL&T calls.
The 34-seat restaurant, housed in a miniature castle at the end of a string of auto shops on Rhode Island Avenue, built a devoted local following. The café offered weekly live music and movie nights, board games for waiting customers, and a small food market that sold, among other things, Hyattsville honey.
What many came for was the pizza, easily the most popular item on the menu.  Diners could watch their crust take shape in Brophy’s deft hands as he tossed the dough like a juggler. Baked in a clay oven, the offerings ranged from the expected (pepperoni, white pizza) to the unusual (lemon-fish, featuring white anchovies).
Sometimes Brophy, 52, served the diatribe du jour along with the entrees. Don’t get him started on governmental regulations of small businesses. As an entrepreneur, he says, “my biggest surprise was the crushing, mind-numbing burden of the cannibalistic government licensing [and] taxing. I pay taxes on taxes, each incompetent agency worse than the last.”
The announcement came less than a week after a glowing review in the Washington Post’s “Going Out Guide.” Local reaction was swift, and for the most part, chagrined.

Ward 2 Councilmember Shani Warner called it “sad news, indeed. Reds is one of my favorite spots in Hyattsville and the place I point to when highlighting the quirky, whimsical qualities that I associate with my neighborhood to people who don’t know much about Hyattsville.”
But some former customers weren’t surprised. “Lesson learned: The rude-New-York shtick doesn’t work in Hyattsville,” said Jamie Aycock, who added that he stopped taking his family there after one too many times on the receiving end of Brophy’s brusqueness.
“True, some customers didn’t like me,” Brophy conceded.  “That can easily be remedied by new ownership.”
Asked if he had any advice for new owners, he suggested increasing operating hours from 5 to 7 days a week, developing catering and delivery services, and “finding a way to make better hay than I did with the Spanish-speaking dollar and the African-American customers.”
In short, what it needs now is “someone with the energy I had when I opened the place. I used up my energy getting it to where it is now. ”
On June 25, the last Saturday night Reds would be open under Brophy’s management, groups gathered outside at picnic tables with pizza, wine and WiFi, while indoors, others listened to a pianist performing jazz standards. A steady stream of customers ranged from regulars to newcomers, including some University of Maryland cyclists who stopped by for a beer in full sponsor-emblazoned Lycra.
Many of the regulars were there because of a June 20 e-mail announcing a “Rent Party Blowout Fandango.” In it, Brophy wrote that “Reds is selling out and closing down under the management of C. Michael Brophy.”
Closing down, maybe. But selling out? Unlikely.

Nature Nearby: Return of the Natives

Nature Nearby: The music of the night

Anti-Trump mural pops up at Hyattsville Busboys and Poets

From the Editor: Were they the ‘good old days’?

Hyattsville Life and Times, 11 years ago 2 min read
Beyond Hyattsville