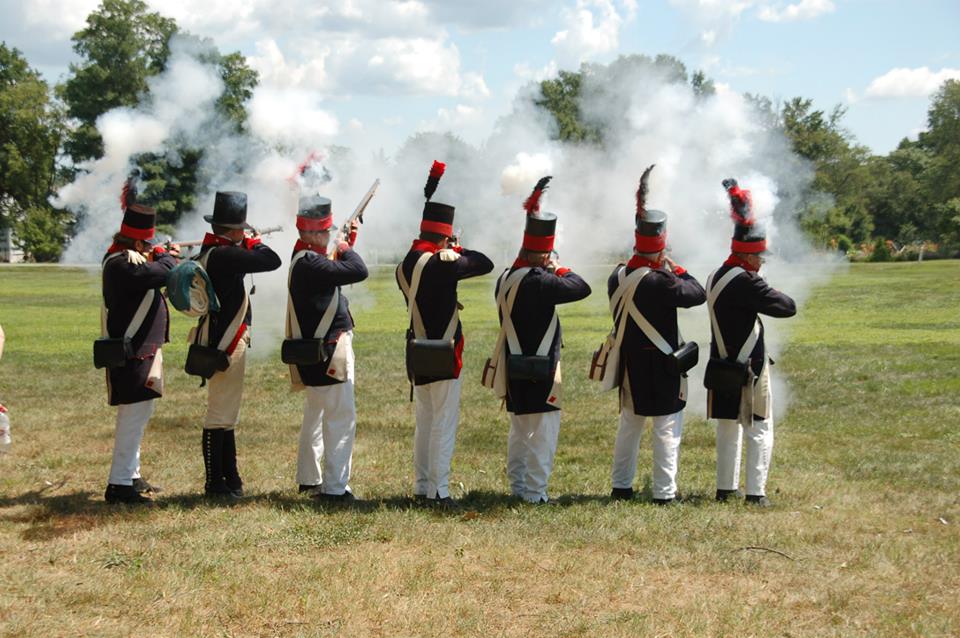 Re-enactors marked the 199th anniversary of the Battle of Bladensburg with the first shots. Photo courtesy the Anacostia Trails Heritage Area.
Beyond Hyattsville

In the early 19th century, Bladensburg was a critical crossroads outside the new city of Washington and also boasted a prosperous tobacco shipping port on the Anacostia River. Today, it can take a lot of imagination to envision our area as the focal point of the 1814 British invasion.

This summer, imagination is no longer required. Maryland Milestones, in cooperation with local organizations, historic sites, and sponsors, presents an array of events marking the War of 1812 Bicentennial. The celebration will culminate the weekend of August 23 and 24 with the Battle of Bladensburg Festival.

The festival’s theme is “Undaunted,” recalling those who fought to defend Washington from British troops in August of 1814. Despite a stunning defeat at Bladensburg, American troops rallied at Fort McHenry in Baltimore, and the British were beaten for a second time in 30 years- firmly establishing the United States as a powerful and important nation.

Aaron Marcavitch is the executive director of the Anacostia Trails Heritage Area, a part of Maryland Milestones and the primary organizer of the bicentennial events. He notes that the most interesting stories of the conflict were those of individual courage, those of people who were put in impossible situations and made the best of them. A personal favorite is the tale of John Pendleton Kennedy, a young soldier who fought the Battle of Bladensburg in a pair of high-heeled dancing pumps because he had no other shoes – that took determination!

Another is the more famous story of First Lady Dolley Madison, who fled the White House ahead of the British army with only the most important state papers and a painting of George Washington to save them from destruction. Visitors to the Undaunted Weekend on August 23-24 at Riversdale will have the opportunity to meet the President and Mrs. Madison, as well as see a full-scale battle featuring re-enactors from across the United States and Canada.

The festival weekend is packed with events, including interpreters in period dress, live music featuring the U.S. Navy Commodores, children’s games, food trucks, and fireworks. Participants can sign up now to run Saturday’s “Bladensburg Races” 5K. (Run like the British are behind you!)

There will be free shuttles from designated parking and visitors of all ages are encouraged. The festival will open Saturday morning with the dedication of the Undaunted Monument, located near the Peace Cross and George Washington House. The monument includes a bronze plaque designed by local artist Joanna Blake, depicting three soldiers during the Battle of Bladensburg who are fighting on despite wounds and great adversity.

Other events will focus on those pieces of history that are still part of the Bladensburg landscape. The Magruder House, Bostwick, and the Indian Queen Tavern are all mentioned in historical accounts, and will be open as living exhibits of what life was like during the War of 1812.

For more information about the War of 1812 Bicentennial and the Undaunted Weekend, see www.princegeorges1812.org