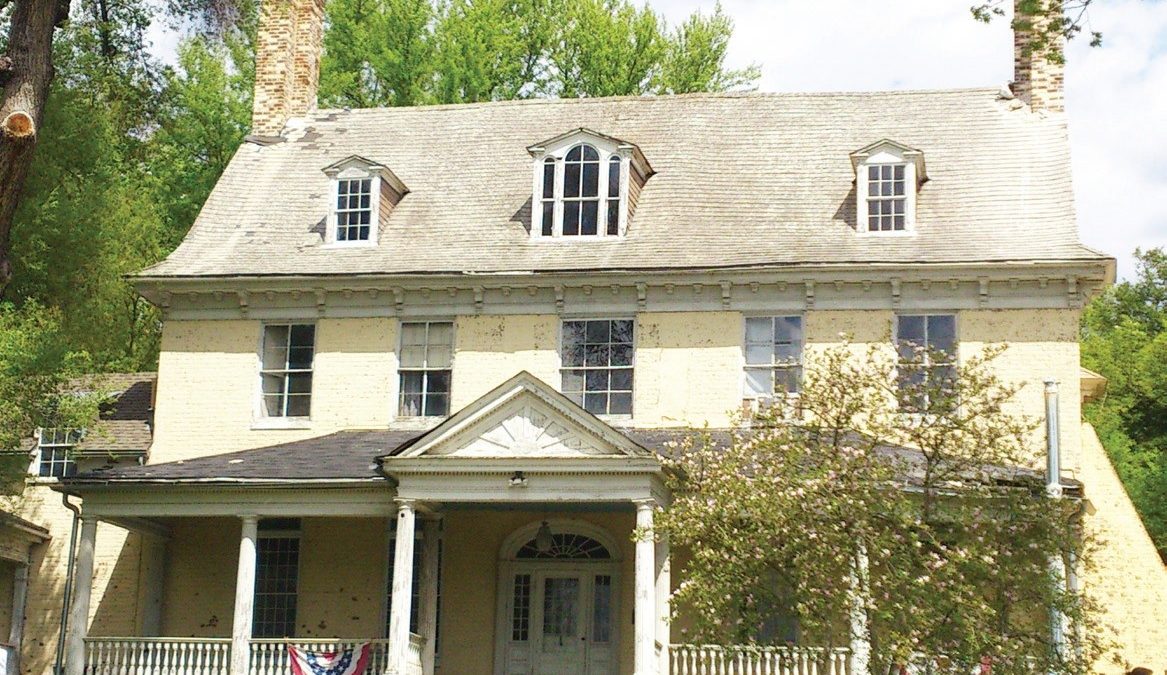 The 18th-century Bostwick House, normally closed to visitors, was open during the May 4 Bostwick Heritage Festival in Bladensburg. Photo courtesy Gray O'Dwyer.
Beyond Hyattsville

On Sunday, May 4, Maryland Milestones hosted the Bostwick Heritage Festival to celebrate the Bladensburg estate’s three centuries of history with dozens of local vendors and artisans.

Younger visitors made bricks and learned to swordfight, while University of Maryland historic preservation students led other guests on guided tours of the house. Interpreters in period dress gave lectures on 19th-century life and farm animals provided a pungent note of authenticity to the former plantation grounds.

This year was the third Heritage Festival, which is part of an ongoing effort by Maryland Milestones and partner organization Anacostia Trails Heritage Area (ATHA) to promote the incredible historic legacy of the Anacostia River region. Bostwick is a particular focus for Maryland Milestones because of its close association with the War of 1812.

The house was constructed in 1746 by Christopher Lowndes, an important merchant with his own shipyard at the bustling Port of Bladensburg. Notable residents included the first Secretary of the Navy, Benjamin Stoddert, and George and Rosalie Calvert who would later build Riversdale.

Unfortunately, Bostwick has seen a lot of neglect over the years. Rosalie Calvert wrote in an 1801 letter that “this house [we] are living in causes the greater part of [our] indispositions, for neither the doors nor the windows close properly and when it is cold we freeze!”

Bostwick was renovated extensively in 1904 by Civil War veteran James Kyner, but later generations of the family moved away from Bladensburg and let the house decline. It was sold by a Kyner descendant to the town of Bladensburg in the late 1990s.

Since 2008 Bostwick has been a “preservation lab” for students in the Historic Preservation program at University of Maryland. The students are collaborating with the town and ATHA to restore the house through grant funding and sweat equity.

Aaron Marcavitch, ATHA’s executive director, says that events like the festival “are great opportunities to explore the house” and its history. Since the house is undergoing repairs — including a recent grant-funded window restoration and stabilization of earthquake-damaged chimneys — the public usually cannot access the site for safety reasons.

But everyone involved with Bostwick would love to see that change. Currently in the works are interpretive panels for the house and grounds to help passersby engage with the area’s history.

Bostwick is very important to Bladensburg as a building and as a legacy of the now-lost shipping industry that was critical to development of Prince George’s County. The house was built in a way that allowed Lowndes to see the river and his shipyard from his front door.

It was also a focal point of the Battle of Bladensburg on August 24, 1814, bearing witness to the disastrous American defeat that led to the burning of Washington later that night. Lowndes Hill behind the house was fortified with artillery and Bostwick was briefly a command post for both sides.

This history is now largely hidden by highways, houses, and industrial buildings, but at the Heritage Festival it was amazing to see a little of the 19th century peeking through.

Hyattsville resident Gray O’Dwyer is an architectural historian and a recent transplant from Richmond, Virginia.

Streetcar Suburbs Publishing, 6 months ago 1 min read
From the Editor

Pride and Prejudice — and Coffee