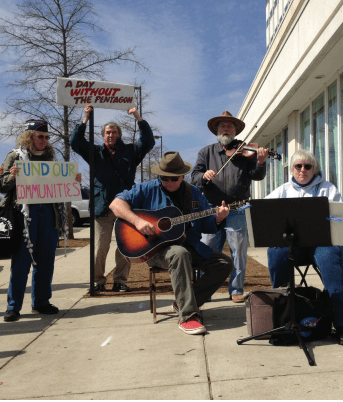 No rally would be complete without people holding
Hyattsville

BY  JOSH LOGUE —“What does democracy look like? This is what democracy looks like!” chanted the 50 or so people who showed up at the Prosperity, Not Austerity Rally at University Town Center on a cool Saturday afternoon in March.

The group gathered outside the Belcrest Road branch of Prince George’s Community College (PGCC), near a long banner that displayed the Pentagon’s budget overshadowing that of other federal departments.

The rally was one of six held throughout the state on March 23 and organized by the Maryland Coalition to Fund Our Communities Not the Pentagon, which is made up of more than 60 political organizations. Residents attended individual city demonstrations, and a coalition- sponsored bus of about 20 supporters stopped at each rally.

Athey, gesturing behind her at the building that houses PGCC, said she remembered when community colleges were free. If the U.S. government cut spending on nuclear weapons by one third, she said as the audience nodded, that money would cover all the expenses of every community college student in the country.

“Fifty-eight percent of the US government’s discretionary budget goes to the Pentagon,” she said Athey. “It’s time to get our priorities straight.”

Faced with sweeping proclamations about different budget priorities, Hyattsville resident Carol Nezzo said she agreed with the sentiment but was unclear about the next step. “I’m used to lobbying for a specific bill. It’s a challenge to figure out what I would go into my representative’s office and lobby for.”

But as the rally got underway, a petition did begin to circulate. It urged the Prince George’s County Council to pass a resolution “that the federal government transfer a significant share of military funds to serve urgent needs in our communities” and encouraged the council to send the resolution as an official statement to President Obama and the members of Congress who represent Prince George’s County.

As people passed around the petition, speakers turned to even broader issues. Rev. Bill Lamar of Turner Memorial AME Church  talked about political activism. “We need to continue to agitate, agitate, agitate,” he said, quoting Frederick Douglas. “President Obama is not going to do what we’re asking without our pressure.”

As the skit wrapped up, one performer stood up and raised her voice, “Get on that bus! Fund our community!”