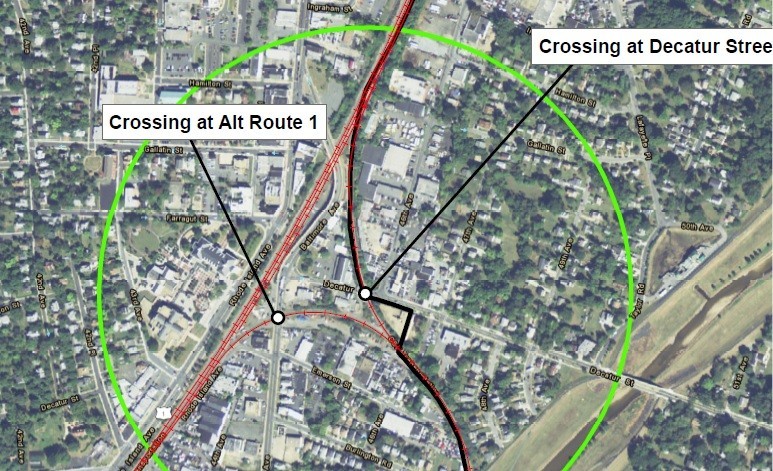 BY REBECCA BENNETT — At the March 2 Hyattsville City Council Meeting, the council discussed new information about the proposed quiet zone at the Decatur Street railroad crossing near Baltimore Avenue.

According to Hyattsville City Administrator Tracey Nicholson, several nearby residents requested the quiet zone. “They cited considerable noise, increased growth, and population density near the rail line as reasons for this request,” she said in a city memo.

On Feb. 5, city officials along with officials from the Maryland State Highway Administration (SHA), Federal Railroad Administration, CSX, and the Town of Edmonston participated in a no-cost diagnostic walk-thru to evaluate safety conditions.

The city said, “The SHA team leader confirmed that approximately 27 trains at a speed of 15-25 miles per hour cross the Decatur Road crossing daily. In addition, approximately 9,000 vehicles cross the tracks per day.”

The city was advised that the Baltimore Avenue crossing should be included in the quiet zone along with the Decatur Street crossing, because train horns are required to blow a quarter of a mile before and after a rail crossing.

The city said it was also advised it needed to update the constant warning time system at both locations, which a city memo said “is an electrical mechanism that synchronizes the algorithm of trains prior to reaching the crossing.”

The approximate total cost for upgrades, labor and lights is approximately $300-600,000, according to a city memo.

SHA believes the project is a contender for federal and state funds, Nicholson told the council, which could happen as early as FY 2017. If the project is funded by other entities, a city memo states Hyattsville may only be responsible for $30-100,000 for a consultant to prepare the quiet zone application and associated filing fees.

“The timing is probably not what the residents were looking for,” Nicholson said, “But the good news is that we don’t have to come up with 300-600,000 taxpayer dollars …”

The next step is for the city to send a letter to SHA requesting the safety improvements to both railroad crossings. Nicholson said that she recommends once the basic requirements for a quiet zone are in place, that the city revisit the quiet zone issue at that time.

Hyattsville Life and Times, 10 years ago 1 min read
From the Editor

From the Editor: There’s no news desert here