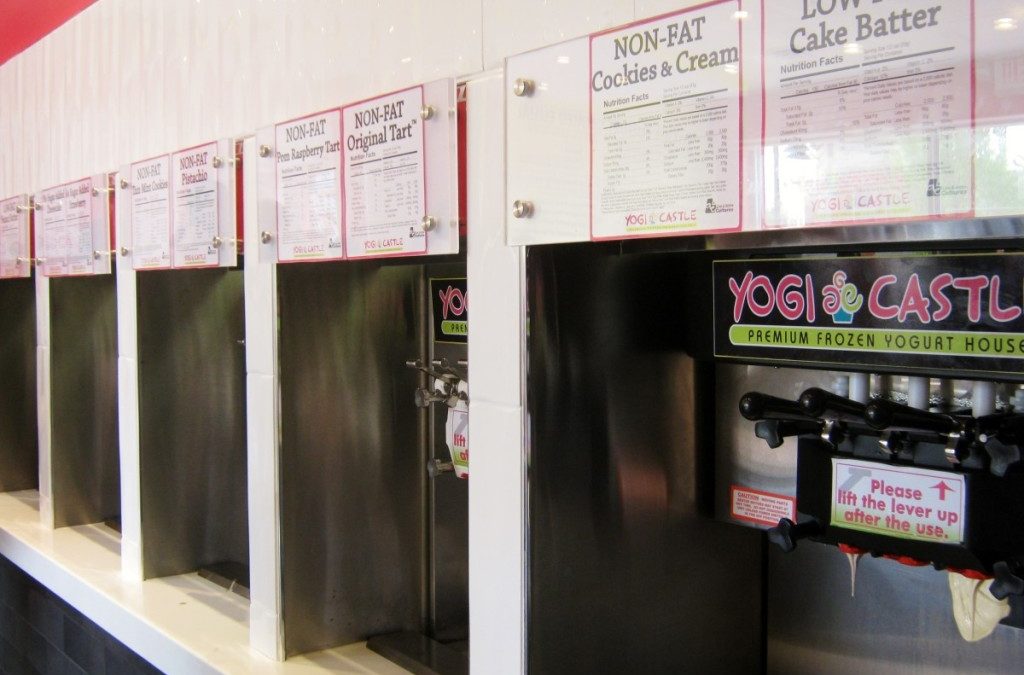 Queen of the Castle: Frozen yogurt and the taste of sweet success

BY SUSIE CURRIE — When Jenna Kwan was a stay-at-home mom in Rockville, she says, “I was Yogi Castle’s best customer!”

Now, as the Beltsville-based chain’s first franchise owner, she might have a hard time picking her own best customer. In April, Yogi Castle became the second business to open in the Shoppes at Arts District Hyattsville, the EYA retail area at the intersection of Jefferson Street and Route 1, and some people have been coming in nearly every day since.

It’s easy to see why. The décor is a cheerful mix of apple green, watermelon pink and white, balanced with black S-chairs, chrome counters and gray adjustable barstools. The walls are blank for now. But Kwan said that in keeping with her Arts District location, she’s considering putting up local artists’ work instead of the posters of menu items that adorn her sister stores.

Go in, and you’ll be greeted by employees — many of them area students — eager to explain the system. Order a fruit smoothie off the menu or take a cup (which come in 16- and 20-ounce sizes) and help yourself to one of the 16 flavors of frozen yogurt from the row of self-serve machines against the back wall. The flavors will rotate, says Kwan, since the parent company offers 60 choices.

Can’t decide between Cake Batter, Red Velvet and Pistachio? Have all three; as many local children have already figured out, your options are limited only by the size of your container (and your budget – at 45 cents an ounce, it can add up fast). On the way to the checkout scale, if there’s room left, you can add toppings ranging from Cocoa Pebbles and caramel turtles to kiwi and coconut.

The treat can be as healthy as you want to make it, and that’s one thing that attracted Kwan to the business. “When I researched all of the franchise options,” she said. “I realized that not all yogurt places have the same product.”

Yogi Castle’s is certified by the National Yogurt Association to contain a minimum amount of live and active cultures; the containers carry the same logo you’d find at the supermarket on Dannon, Yoplait and Chobani, but not on, say, yogurt-covered raisins or pretzels.

Bringing that to the retail space, she said, seemed like a “perfect fit. There’s a healthy trend to the merchants here – Yes! Organic Market, Elevation Burger, Chipotle. Even Big Bad Woof [the pet supply store opening next month] is organic. ”

Kwan, 35, is a native of Bethesda, and her parents have owned Bradley’s Deli there for 27 years. But she’s found something unique in Hyattsville.

“I wasn’t expecting the strong community,” she said. “People take time to introduce themselves and they all seem to know each other. It feels like we’re in a small town.”

One of her employees, DeMatha High School senior Jasper McElrath, is from this “small town.” Growing up, he never thought of Hyattsville as a destination. “My friends all wanted to hang out in University Park or College Park,” said McElrath, 17. “But now, this is the up-and-coming area. I see students from a lot of the high schools here.”

Howard County businessmen Peter Jung and Jin Kim opened the first Yogi Castle, in Gaithersburg, in 2009. Kwan’s is the fourth location, with two more Maryland locations coming this month. In June, a Dupont Circle branch is scheduled to open.

Miss Floribunda: When nice plants get a bad reputation

From the Editor: What’s happening in Hyattsville