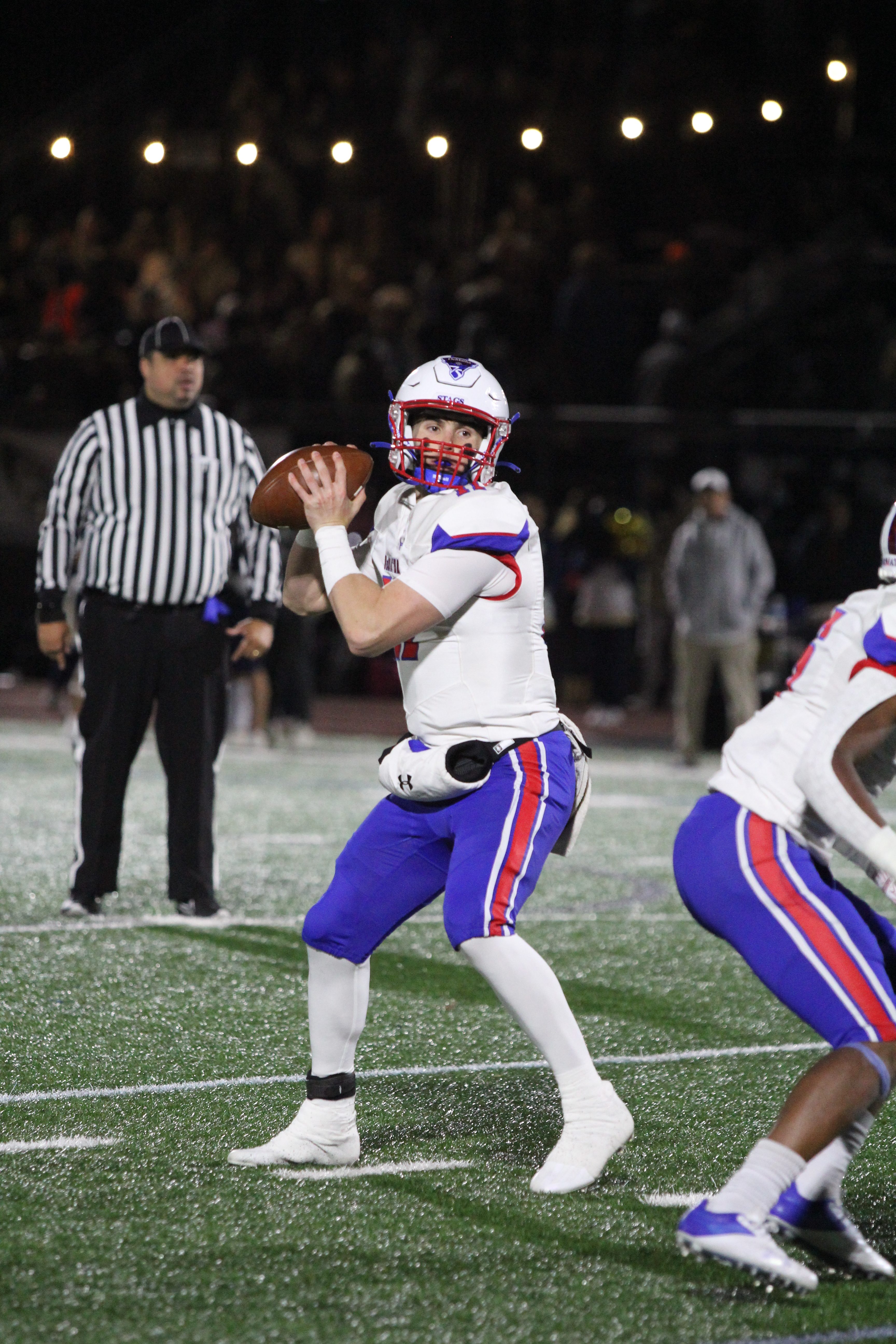 DeMatha senior quarterback Blake Kendall was feared lost for the season when he was hurt in the Stags' opening game. He returned to action Nov. 5 in a win over Good Counsel. Photo courtesy of Ed King.
Hyattsville

After suffering a devastating foot injury in DeMatha’s first game of the year, quarterback Blake Kendall’s high school career appeared to be over. Ten weeks later, the senior from Florida returned to help lead the Stags to a 28-0 victory over Good Counsel in Olney on Friday.

“I had no expectation of him ever coming back – none whatsoever,” DeMatha Coach Bill McGregor said. “What he did to come back, how hard he worked, was absolutely unbelievable. I am so absolutely proud of him and all his accomplishments.”

With the victory, the No. 5 Stags finish second in the Washington Catholic Athletic Conference. They will host Good Counsel in a Capital Division first-round playoff game at Wilson Stadium in Landover on Friday Nov. 12 at 7 p.m.

Gonzaga will play at St. John’s in the other semifinal Saturday at 1 p.m. The winners will meet for the WCAC championship in Landover on Sunday Nov. 21.

After helping Cardinal Gibbons High School of Fort Lauderdale, Fla., capture the Class 4A state title as a backup last season, Kendall transferred to DeMatha for his final year.

On Aug. 28, during the Stags’ second series, he suffered multiple injuries to his right foot and lower leg. They included a detached deltoid ligament, fractured fibula and dislocated ankle. He had surgery six days later and was feared lost for the season.

Kendall’s treatment, under the care of DeMatha head trainer Wendy Norris and her staff, included icing, elevation and massage therapy. He said he did stretching and strengthening exercises for an hour a day for two months.

“When it happened, I wasn’t sure how long I was going to be out,” Kendall said. “A lot of people told me my high school career was over. I had settled [my mind] with that at first. I was just happy to be here with the guys at DeMatha. It’s a great school, great team, best coaches in the country.

“But once I knew there was a chance [to come back], I worked my butt off to do everything I could to get back on this field because there’s no place I’d rather be.”

Dallas Cowboys quarterback Dak Prescott had a similar injury in 2020. He missed the rest of the year.

Denzel Gardner, the Stags’ rookie quarterback, started his eighth consecutive game Friday. He scored on a 1-yard run on the opening drive. The key play was junior running back Brendon Wyatt’s 66-yard run.

The first time Kendall dropped back to pass, he was sacked. Because DeMatha had a 21-0 lead at halftime, they ran the ball almost exclusively in the second half. Kendall finished a modest 3 of 6 passing for 21 yards. His 14-yard scoring toss to Noah Vitko put the Stags up, 28-0, with 8:38 to go in the game.

“I’m truly blessed to be around this team and be back on the field,” Kendall said. “There’s nothing I love more than being out here with the guys. I thank Denzel for what he’s done, and we’re just going to continue helping each other get to the top.”

Wyatt scored on a 3-yard run late in the first quarter that was set up by junior Tawfiq Byard’s interception and 13-yard return to the Good Counsel 25. Byard also recovered a fumble after the Falcons had driven to the DeMatha 19.

Wyatt rushed 14 times for 147 yards. Gardner scored from 18 yards, part of his 61-yard rushing night. With Kendall and Gardner, the Stags have a very good quarterback tandem.

“We thought we could use two [tonight],” McGregor said. “You know, Denzel’s carried us all the way through to right now and did a great job tonight. I can’t say enough great things about him. Both quarterbacks are very, very unselfish. They’re great teammates, and they care a whole lot about the success of the team and the program.”

Kendall has nothing but praise for Gardner.

“I really think he’s the best freshman quarterback in the country,” he said. “He’s done a fantastic job leading this team and being an absolute baller out here on the field.”

The 6-foot-2, 205-pound Kendall has a preferred walk-on offer from North Carolina State. In addition to DeMatha’s remaining game or two, Kendall has been invited to play in three All-Star games: the Maryland Crab Bowl in Salisbury, the Football Hotbed Senior Bowl in Fort Lauderdale, and the Blue-Grey All-American Bowl in Tampa, Fla.

With good performances in those contests, Kendall could land a college scholarship offer.

“He’s just a tremendous young man,” McGregor said, “a great leader and a great motivator for our football team.”