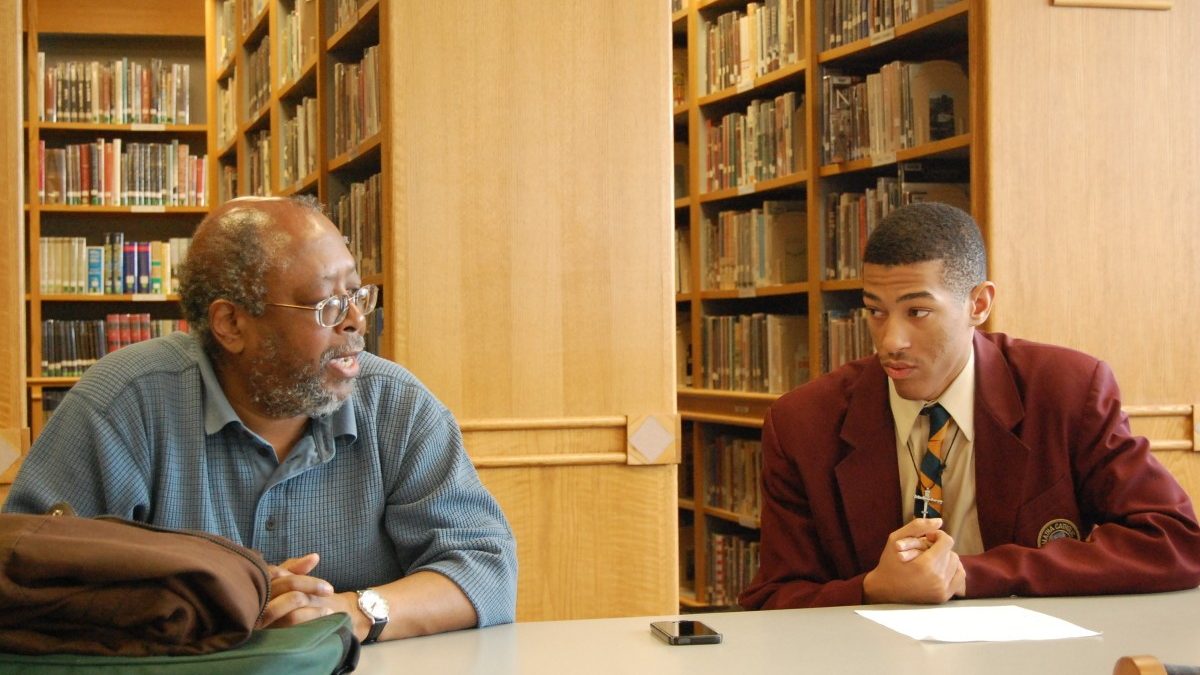 BY MARK GOODSON — Edward P. Jones, an author once described by the Washington Post Magazine as the “voice of the city,” is often portrayed as an introvert. According to the magazine, Jones spent years with his 2003 Pulitzer Prize-winning novel The Known World germinating in his mind before he put a pen to paper.

Still, Jones agreed to visit a DeMatha Catholic High School English class that was studying his short story collection Lost in the City. His only request was a ride to the school because he does not own a car, or anything he can’t “fold up and bring into [his] apartment every night,” he said.

On March 12, the Washington, D.C. native quietly took a seat in DeMatha’s library for a discussion led by Aaron Brooks, a senior at the school.

“I didn’t think you were really coming,” one of the students told him.

Jones is a big name in the literary world. In addition to the Pulitzer, he is a PEN/Hemingway Award and National Book Critic’s Circle Award recipient. His stories deal with African American life, and Lost in the City focuses on 20th century Washington, D.C.

Despite the MacArthur Foundation declaring him a genius, Jones said he sees himself as nothing more than a story-teller. His only loyalty is to the characters stirring in his imagination.

“You wake up and in your mind is a girl who is raising pigeons, and what you have to do is find out how she got there and what might well happen to her afterward,” he said of his short story, “The Girl Who Raised Pigeons.”

In 45 minutes of questions from the class and other visitors, Jones focused on a particular theme. Characters make the story, he said, and a writer’s loyalty to those characters is what makes for good storytelling. He dismissed all of the academic tools frequently used to teach his books — recurring themes, historical references, and the symbolism of characters’ names.

The collection of short stories is often read by literary critics as a case study on the Great Migration’s impact on D.C. But Jones never intended to do more than tell believable and resonant stories.

“You see, all the questions you’re asking me, those are things I really don’t think about,” he told the students.

Instead, he said, he writes what he knows.

“In the South [at the turn of the 20th century] there was a kind of common enemy. So people, for the most part, had no choice but to act as one,” he said. After people moved to D.C., … “The cohesiveness they had in the South was lost over time.” Horrible things can happen, he said, when people adopt the the strategy of “every man for himself.”

Jones addressed his harsh treatment of characters by saying he writes what the universe he is creating requires him to write.

“There’s moments when there’s a sort of emotion going along with a character, but you have to divorce yourself from that,” he said. “You may have the best person in the world, but if it calls for a knife in the back, then you do it.”

When asked why his stories rarely have a positive or culminated ending, Jones replied, “It’s like life.”

Honeyville, a beer brewed for Hyattsville, is back

Blazing a trail for equality