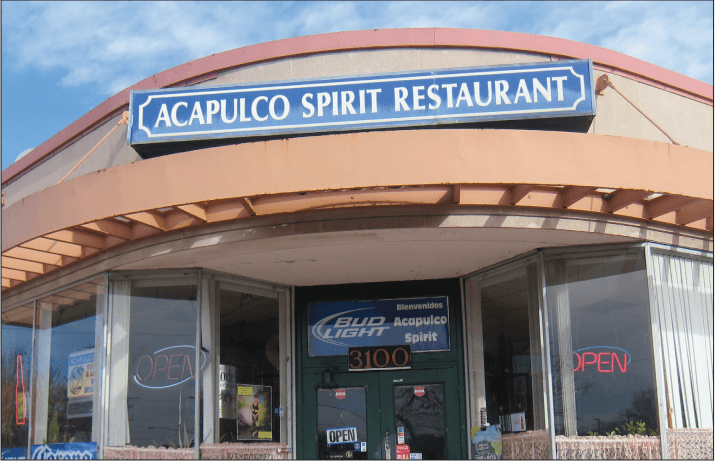 Owners of Acapulco Spirit, a restaurant in Queens Chapel Town Center, say they want a dance hall permit so their weekend karaoke customers can dance. Photo by Susie Currie.
Government

BY SUSIE CURRIE — A West Hyattsville restaurant wants to add dancing to the menu, but city officials oppose the change. The city council is expected to vote on whether to oppose the request at its meeting on February 19, just after a 7 p.m. public meeting on the subject.

Acapulco Spirit, a Salvadoran and Tex-Mex restaurant at 3100 Hamilton Street, applied for an Adult Dance Hall License on December 26. (No, not that kind of “adult dance.” See below.)

The Prince George’s County agency that issues the licenses does so only if the municipality registers no objections. The City of Hyattsville has until March 1 to formally oppose the license or it will be granted.

Edgar and Maria Santizo opened the Queens Chapel Town Center eatery in 1996. At the time, they were raising their three children in a house “about a block away,” says son David, 27. Now he and his younger sister, Elena, help manage the business.

Over the years, it has expanded in both size and offerings; after taking over the adjoining space from Kingston Carry Out, the owners installed a bar serving beer and wine. Liquor was added about four years ago, followed by weekend karaoke in 2010.

And that, says David, is why they now want to get an Adult Dance Hall License.

“We have customers who come here just for the karaoke” – mostly, he says, rancheras romanticas, traditional Mexican ballads – “and they are asking to dance to it. I have to tell them they’re not allowed to.”

Prince George’s County regulations regarding establishments that allow dancing tightened in July 2011, when the county council unanimously passed an emergency bill aimed at curbing violent crime. Since 2005, there had been 61 homicides at or linked to dance halls in the county, according to County Executive Rushern Baker’s office.

The bill also forbids dancing during certain hours; sets a noise threshold; and requires a “security plan” for spaces that have an occupancy limit above 250. The plan must then be approved by three county departments: Environmental Resources, Police, and Fire/EMS.

Those agencies are also given authority to shut down noncompliant businesses, including those that “permit any disorderly conduct or allow a public nuisance … [or] an activity that poses a threat to the health, safety and welfare of the public.”

Those are among the reasons city staff want the council to deny Acapulco Spirit the license.

According to a January 31 memo from Jim Chandler, the city’s director of community and economic development, Hyattsville police have been called there nine times since last February for incidents ranging from theft to fights.

The staff memo mentioned that incident reports from those businesses had also been reviewed, adding that “there were a significantly higher number of police incident reports for businesses which have been known to, and been cited for, uses that are not permitted by the existing use and occupancy permit.”

Councilmember Shani Warner praised the restaurant. But she said she hopes that residents on both sides of the issue – especially those in the affected neighborhood – will come before the council during the public meeting on February 19.

“We shouldn’t make the decision in a vacuum,” she said.