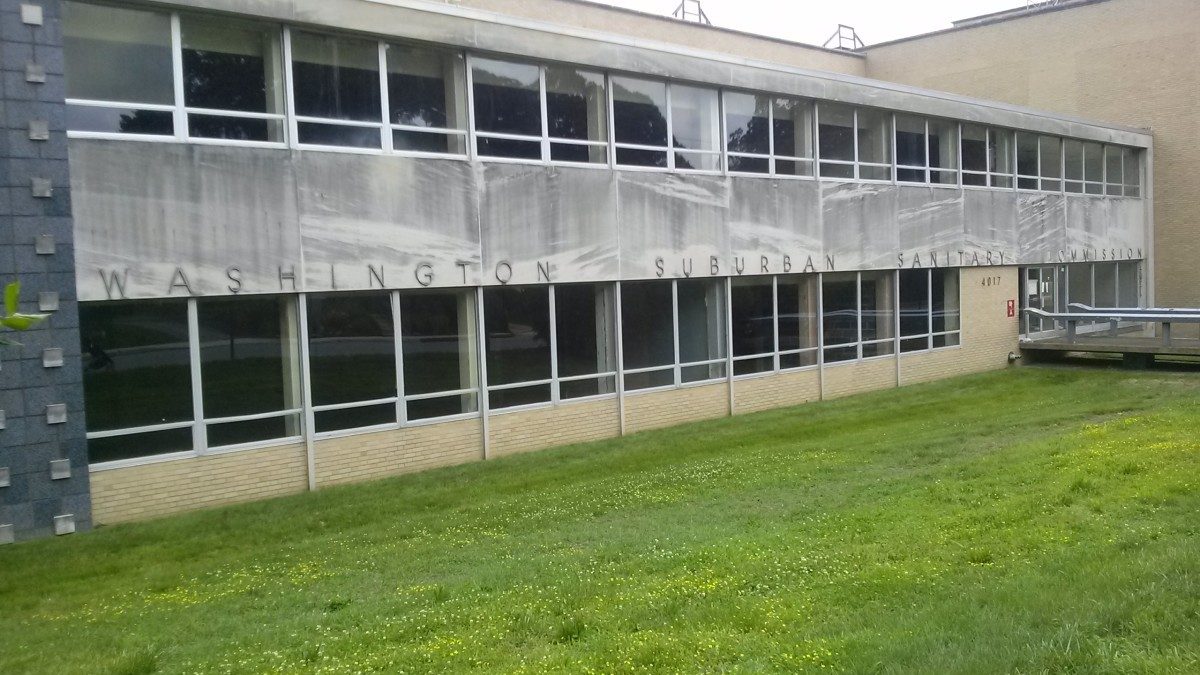 Historic preservation has been a divisive issue since it became a national movement in the mid-20th century. Passionate defenders of preservation cite events such as the 1963 tear-down  of New York’s historic Penn Station to build Madison Square Gardens as examples of short-sighted victories of graft over culture. Opponents contend that historic preservation prevents progress and puts a stranglehold on development that brings often much-needed economic benefit to communities.

The future of the WSSC building is one of the trickiest types of preservation questions. Built in stages between 1939 and 1964, the sprawling former headquarters of the Washington Suburban Sanitary Commission occupies more than seven acres on both sides of Hamilton Street near Magruder Park. Since a “For Sale” sign was posted out front in early January, the debate has only grown hotter. What to do with a massive commercial building on a massive lot, right in the heart of a residential community and adjoining a park? Obviously a deteriorating, vacant building is not beneficial to the community, the owners, or the local government, but that is the only point on which all three agree.

Douglas Development has decided that the building they purchased in 2004 “does not suit the company’s current strategy at this time” and that all parties might be better served if someone else took on the project. Representatives of Douglas assert that the building is in better condition after extensive asbestos remediation and will be more attractive to a potential buyer. Some Hyattsville residents are frustrated at the inaction, citing vandalism, theft, loitering vagrants, and other criminal activity that has spilled over into the neighborhood and adjacent park.

Now that the building is on the market again, all previous battles over the future of the WSSC building are brought firmly back to square one. What to do with it? Out of all the options presented by residents, local officials, historic preservationists and developers with industry insight into possible uses, there are three themes which match up neatly with three major trends in historic preservation today:

Between residents, local government, and business interests, there are a lot of opinions and a lot of very valid concerns. Hopefully, a reasoned, productive decision can be reached that takes into account the needs of the community now, and in the future.

Gray O’Dwyer is a professional architectural historian and history enthusiast. A native of Richmond, Virginia, she has recently moved to West Hyattsville and is enjoying getting to know her new ’hood. Bricks & Mortar is a new column on architecture and development in the historic city of Hyattsville.

Hyattsville Life and Times, 5 years ago 6 min read
Beyond Hyattsville