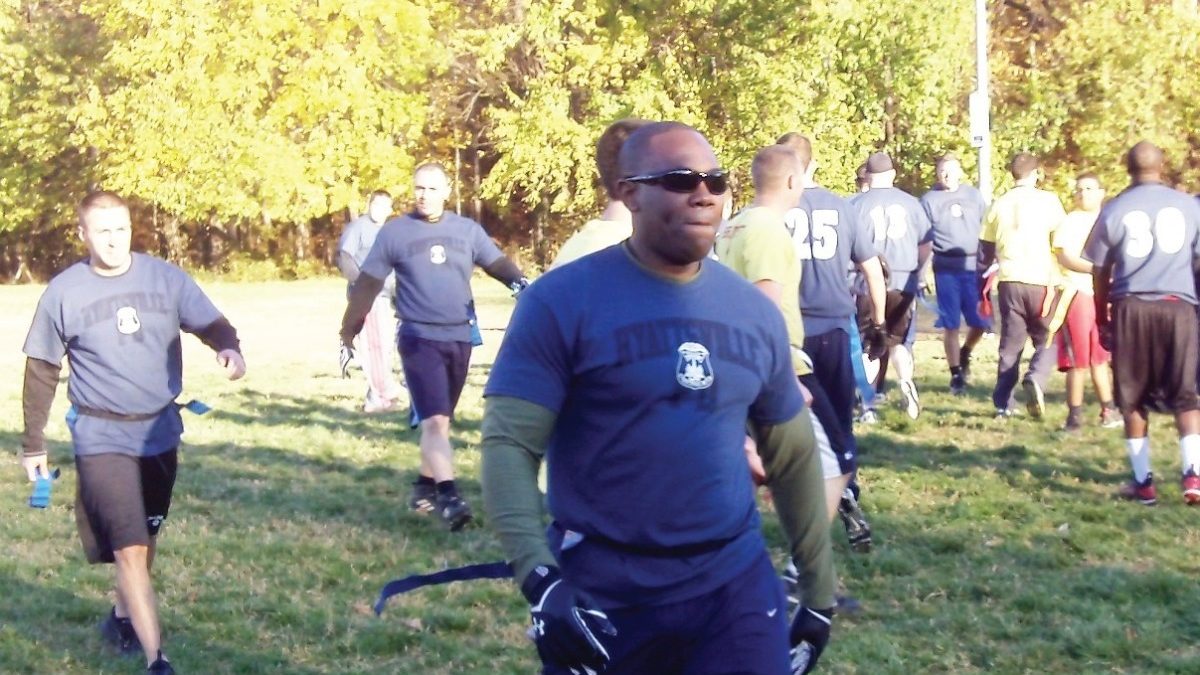 BY MIKE PERSLEY — On Saturday, Nov. 9, members of  the Hyattsville police and fire department squared off in the much anticipated 2013 Heroes’ Bowl, the annual flag-football game played to collect toys for underprivileged children for Christmas.

The police, after two years of futility, finally took home the Heroes’ Bowl trophy with a resounding 25-6 victory.

“I was hoping we would win this thing,” said police officer Jerry Macaulley, “I mean, we designed the trophy, but we’ve never been able to take it home with us.”

The Bowl began in 2010, when a group of Hyattsville police officers and firefighters had an idea.

“I can’t tell you who it was, and it’s probably something that everybody would have an idea about,” said Andrew Davis, president of the Fraternal Order of Police Lodge #119.

The two groups, recognizing their natural but friendly rivalry, wanted to play a football game against each other. But they didn’t want to play just for bragging rights.

“It was one of those things of ‘Let’s see who’s the best, and let’s do it in the form of football,’ ” Davis explained, “ ‘but let’s make this a charity event.’ ”

And so the group searched for a charity, finally deciding on the Sonny Frazier Toy Drive, a nonprofit organization, run by former Ward 5 city councilmember Ruth Ann Frazier that collects toys for underprivileged children.

“When the police approached me and asked if I’d be interested, I said ‘Of course we would be,” said Frazier.“Suddenly there were ten women in charge of putting on a sporting event.”

The first one, in 2011, was a success, collecting over $1,200 in donations and even more in toys. In 2012 the event earned around the same or slightly more. As in past years, the 2013 Bowl was held at Magruder Park, although the fundraising tally was not available at press time.

This year’s bowl, which took place in Magruder Park, came with high expectations.At stake was the pride of the police, who made up The Finest team. In the first two years, the Hyattsville Volunteer Fire Department, whose team was The Bravest,  turned out far more players and easily out-manned their opponents.

“I was hoping we would win this thing. I mean, we designed the trophy, but we’ve never been able to take it home with us.”

“I don’t remember the exact scores, “ said Davis, “but I know it’s not been close.”

But the  police had a strong showing this year, fielding 23 players as opposed to 15 to 17 in the years past.

“We finally have some ability to move players around,” said Davis.

The Fire Department was equally as motivated to defend their title.

“We’re hoping to retain that championship this year,” said Tom Falcone, president of the Hyattsville Fire Department, before the game.

Most importantly, of course, were  the toys and money that were collected.

“All of the spectators bring stuff,” explained Falcone. Admission to the game was either a new, unwrapped toy or a monetary donation, and all money from food or drinks supported the toy drive as well. The city even offered to match the first $1,000 collected.

“When the parents are as happy as the kids then you know you’re doing something right,” said Frazier. “People are so generous. It’s really unbelievable.”

Letter to the Editor: A councilmember thanks the community