According to Holland, this number also includes the gruesome robbery at Lawson’s Pharmacy earlier this year.  Police said the same group was responsible for a series of robberies, it was investigated by a task force, and closed with arrest. 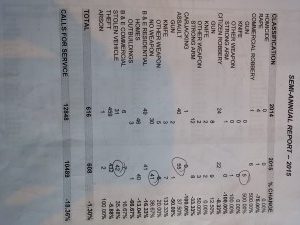 One resident expressed frustration with the lack of perceived patrolling of the area.  Holland said police have been doing more frequent vehicle patrols and foot patrols along residential and commercial Hamilton Street.

“They are doing everything they can to be as visible as they can,” Hyattsville City Administrator Tracey Nicholson said.

According to the January to June report, another type of crime that has increased around the city in that period include assaults — specifically assaults with no weapon — which jumped from 40 to 55 overall.  Ward 4 saw the number of assaults jump from 3 to 10.  Ward 5 saw the number jump from 6 to 11.

Reports of stolen vehicles also rose from 31 last year to 42 during the same period this year.  Wards 1, 2, 4 and 5 all saw increases in vehicle thefts from January to June, but Ward 5’s stolen vehicles jumped from 8 to 15 this year.

Last August, Hyattsville City Police told residents that crime in the city was on a downward trend.  The January to June 2014-2015 report shows overall crime is down by 1.3 percent and total calls for service are down more than 18 percent — or more than 2,300 calls.  Types of crime that decreased during this period include rape, residential breaking and entering and theft.

Whole Foods soon to be neighbor to spa & local bank

Hyattsville Arts Fest showcases art in all its forms