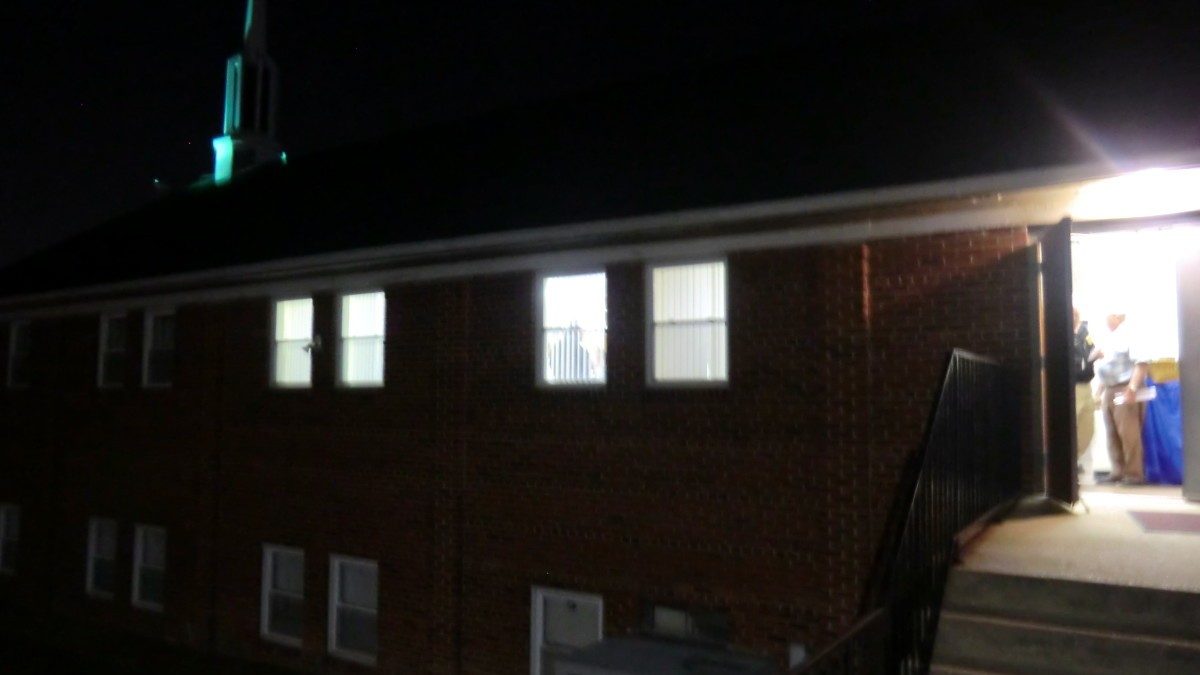 On Thursday, August 14, community members gathered at the West Hyattsville Baptist Church to meet with members of law enforcement in reference to the recent shooting on July 31 on the 5700 block of 30th Street.

A member of the community translated the full presentations and comments into Spanish.

Hyattsville City councilmember Edouard Haba (Ward 4) helped set the tone for the evening, citing the attendance of a father of a shooting victim from July 31.

“We share their pain.  They are not alone.  They have the full support of the community.  And, we do pray for them, that the boy is recovering steadily.  We hope he is going back in the community, and this will never happen again,” said Haba.

The father of one of the shooting victims wanted the public to know, “Hyattsville City Police Department has done a phenomenal job in the investigation.”  He went on to say that they are passionate about their work.

In an update from Hyattsville City Police Chief Douglas Holland about the recent shooting, he says there were four suspects, one driver in his 30’s, and three others in their early 20’s.

Holland says two arrests were made.  One suspect arrested lives in Laurel.  Another lives in Montgomery County. Police cannot definitively link the shootings to gang activity.  He says there is also no indication at all that the incident was drug-related.

Holland went on to say that it’s an ongoing investigation. Anyone who knows anything about this incident is still encouraged to call the Hyattsville City Police Department at 301-985-5050.

The police chief also said that they have not recovered the weapon.  He instructed residents that if they see someone with a gun they shouldn’t have to call police.

“Not an hour later.  Not a day later.  Call us immediately,” he said.  He included that dispatchers will ask for your name, but you do not have to give it.  “If you don’t want to give your name, we will still come.”

Despite recent surge, crime trending down

The overall message from police was that despite recent violent crimes, the overall trend in crime was decreasing.

“When an unfortunate incident occurs like this shooting, it increases the fear of crime, ” said Holland.

Chief Holland took residents through crime statistics that compare January to July 2013 to the same period in 2014.

According to police reports, there have been no homicides in the City of Hyattsville this year, three rapes, and one commercial robbery.   A number of categories have seen a reduction in crime.  Other categories have had increases in crime.


Crimes against persons are down approximately 10%, says Holland, while crimes against property are up nearly 6%.   Police attribute skewed crime numbers to shoplifting thefts at the Mall at Prince George’s.

In a five-year comparison, police statistics show that crime is going down in all categories.

“Crime has been trending in the direction we want it to city-wide,” according to Holland.  He went on to say that the recent spike in crime is unusual.

Captain Lance Ware of Metro Transit Police says the biggest crime around metro stations are bike thefts.  He says the West Hyattsville Metro Station is not considered a “problem station.”

One resident says they are not seeing patrols on 30th Avenue in West Hyattsville anymore.

Chief Holland says the Hyattsville Police Department was taking notes and will be addressing comments like this from the community.  He admits the patrols are not frequent enough.

He went on to say another issue was that Northwestern High School encompasses five zip codes, but Hyattsville City Police only have jurisdiction in three of those.

But, he agrees they can find better ways to keep track of kids.

Holland says “we” have work to do.  “Not WE the police alone.  Not YOU the community alone.  We together have some work to do.  This recent shooting was tragic.  But, on the other hand this presents a great opportunity for us.”

Holland went on to say this was the largest gathering in a long time to talk about safety and security in the community.

Outgoing Northwestern High School principal Edgar Batenga said the school system provides academic structure in the summer, but not social structure.  He says he wants to work with the community to provide that kind of structure in the future.

Keep an eye on your neighborhood

Chief Holland says one of the best ways to combat crime is the neighborhood watch.  He says they can be simple, the police department will support you, and they will help you set it up.

Hyattsville City Police will come to your meetings, your neighbors can tell police what is happening, and they will brief you on what is going on.

A concerned resident commented how she didn’t know most of the people who passed by her house.

Holland says that neighborhood watches make residents more familiar with their community, the police, and our neighbors.

He rounded out his comments with “If you see something, say something.”

PHOTOS: Last "Jazz on the Lawn" of the season

Streetcar Suburbs Publishing – who are we, and what do we do?