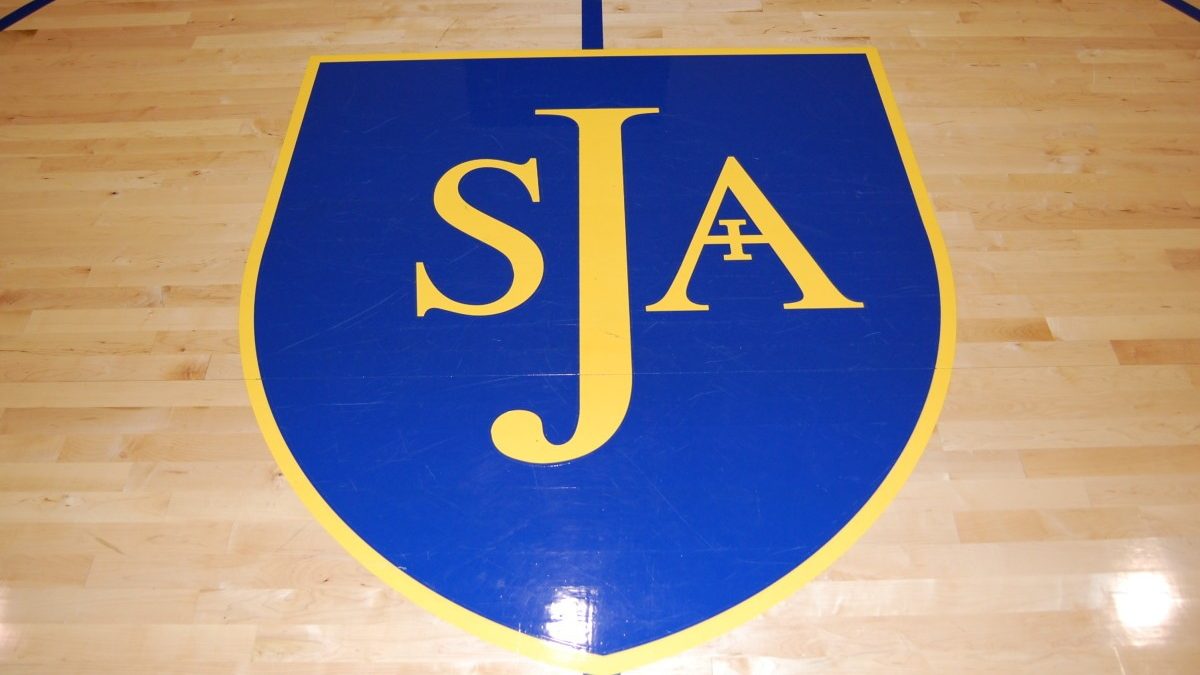 St. Jerome Academy has a new set of bleachers on its wishlist after the new court was installed by Weyer's Floor Service. Photo courtesy Chris McManes.
Education

BY CHRIS MCMANES — Players, coaches and fans who have been coming to St. Jerome Academy for its Thanksgiving weekend basketball tournament might not recognize the gymnasium when action gets underway Friday.

The floor that some of the best players in the area competed on since 1942 has been replaced with a top-of-the-line surface featuring the academy logo at center court.

That won’t be the case this weekend.

“It’s a much-welcomed addition to our tournament to have a brand new floor,” Tournament Director Joe Sego said. “I think it’s going to surprise a lot of people who have been here before, expecting to see the old confines of St. Jerome’s.

“Instead, we have a bright, clean new gym with all the lights working and a very shiny floor.”

The 19th-annual tournament is named in honor of Dick Brown, who coached basketball and taught at St. Jerome for 40 years and was the head JV football coach at DeMatha when he died in 2006.

“Dick spent most of his life coaching and teaching in Hyattsville,” Sego said. “So I thought what better way to honor him here in the city than with a tournament bearing his name.”

Admission is free, unlike most local youth tournaments, which charge between $5 and $7 to get in.

“It lends itself nicely to Thanksgiving weekend,” Sego said. “Your whole family can come see you play – for free.”

The basketball showcase runs Friday and Saturday from 9 a.m. to 9 p.m. and Sunday from noon to 8. Teams will play both at St. Jerome Academy’s gymnasium and DeMatha’s LT (Seal) Brendan Looney ’99 Convocation Center. The building, which holds classrooms, meeting rooms, training facilities and the Morgan and Kathy Wootten Gymnasium, was in August renamed in honor of DeMatha grad and Navy veteran Brendan Looney, who died in a 2010 helicopter crash while engaged in combat operations in Afghanistan.

Play will start with 48 boys and girls teams, nearly all of which compete in the Catholic Youth Organization (CYO) of the Archdiocese of Washington, and feature five divisions: 14-and-under boys varsity A and B; girls varsity A; and 12-and-under JV boys and girls.

The varsity A division is better known as Mid-Atlantic, and the B division is new in 2014.

Each squad is guaranteed to play at least two games. All the teams are from Washington, D.C., Montgomery and Prince George’s counties except for Archbishop Neale, which is coming from La Plata in Charles County, Md.

Sego said he begins working on the tournament in September and that it’s “practically a full-time job” during the final two prep weeks. He has to, among other things, contract with the referees, find people to sell concessions at St. Jerome, as well as programs and raffle tickets, set the schedule and brackets, and collect registration fees. Parishes pay a $240 entry fee per team.

Charlie Grau, tournament marketing director, had a banner year selling advertising in the program. On Sunday, a raffle will be held for one of five prizes, including basketball-themed gift baskets and a week at the Stags’ basketball camp. St. Jerome parish and DeMatha share the event proceeds. It is the largest annual fundraiser for the St. Jerome CYO program.

New bleachers are at the top of the CYO wish list. The old ones were deemed unusable when the new court was installed by Weyer’s Floor Service in the spring. Fans will sit on chairs borrowed from Hyattsville Elementary School, while the floor under the seating area will be protected by a tarp from DeMatha.

Mike Jones, entering his 13th year as the Stags’ head basketball coach, also serves as director of recruitment. He and Athletic Director Ed King enjoy seeing so many local students visit DeMatha, an all-boys school with a presence on revitalized Route 1.

“From an admissions standpoint,” Jones said, “it’s a great opportunity for us, just to have those guys in our facility and on our campus.”

The Turkey Shootout began at St. Mark’s in Hyattsville in 1996 and brings about 1,000 people into the city, generating economic activity for local restaurants, gas stations and other businesses.

A Showcase for Top Talent

Sego assisted Coach Brown at St. Jerome in 2005-06 and succeeded him the following season as varsity A coach. The 1994 DeMatha alumnus was named CYO Coach of the Year in 2010 and has guided the Jaguars to a pair of Mid-Atlantic city titles (2008, 2011).

Oladipo, who attended St. Jerome for nine years (1997-2006), is the first St. Jerome graduate to be drafted into the NBA. Cook is projected to be chosen in the second round of next year’s NBA Draft.

In addition to Cook, other players Sego has worked with as head coach include three who play on the DeMatha varsity – Jaelin Grant, Kellon Taylor and D.J. Mitchell – and Marcus Derrickson, a 6-foot-8 forward who has committed to Georgetown.

“We’ve had a lot of other players who have gone on to play at major colleges and some have played professionally overseas,” Sego said. “I think it’s a nice showcase for the talent in the area.”

Chris McManes is a Hyattsville resident who coaches baseball and basketball at St. Jerome.

Duende District, a bookstore for and by people of color, pops up in West Hyattsville