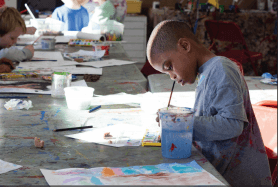 Children create at Art Works Studio School summer camps. When the studio moves to Hyattsville next year, it will share space with the fourth Pizzeria Paradiso in the metro area. Photo by Juliana Molina.
Art

BY ROSANNA LANDIS WEAVER — The plans are drawn, the capital campaign begun, and Pizzeria Paradiso has announced its intention to share the space. But there’s still a great deal of work left to complete before Art Works opens in its new location in  2014.

Of the initial steps, the announcement that has ignited the most appetite among residents is the news of Pizzeria Paradiso. After all, when a restaurant has locations in Georgetown, Old Town Alexandria and Dupont Circle the fourth location has historically been more likely to be Bethesda than Hyattsville.  The owner of Pizzeria Paradiso, however, Ruth Gresser, is the partner of Art Works executive director Barbara Johnson, as well as a longtime supporter of the arts.

While the initial plan had been for a coffee shop in the new location, which formerly housed Marche florist, as time passed Gresser came to believe the spot was well-suited for one of her restaurants.  “She wasn’t actually looking for a new location,” notes Johnson,  “but it seems like the right next step for both of us.”  Johnson adds that this takes Pizzeria Paradiso back to its roots as a neighborhood restaurant, which first opened its Dupont Circle location on the second floor of a townhouse in 1991.

The restaurant will be in the northeast corner of the building, opposite the greenhouse.  The greenhouse, well, that will be the greenhouse where children in the after-school program can grow and harvest vegetables.  Johnson describes it as the hub of the program, which was  slated to open in the fall of 2014. It will in Johnson’s terms include, “homework, growing, drawing, sculpting, cooking and eating.”  In theory, the children will be interested in tasting food they have helped grow.

In addition to serving elementary school students, Johnson wants this to be a place where teenagers could gather. “We [as a society] don’t have the same options for those kids to be creative,” notes Johnson, who points to the success of Art Works’ teen summer camp.

The process of preparing the building will be a long one. There will need to be bureaucratic approvals for the aftercare program and the restaurant, with a raft of separate regulations covering each, all of which the architects are considering. For example, they’ve already decided that there should be separate entrances to the restaurant and the cultural arts center.

These transformations and visions will require funding, of course. This spring, the studio was awarded a $90,000 grant from the Community Development Block Grant (CDBG) for facade improvement.

The federal money, awarded by the city, altered its internal limitations on the grant amount. Johnson says they made that decision when they “saw the intense amount of work needed to make that building a beautiful landmark.”

Work could begin as early as mid-July, contingent on approvals and the chain of paperwork involved with the grant. The grant has a matching component which will require the buyers to raise additional money as well.

On June 20, Johnson and Gresser, who have been together for 21 years, held a kickoff campaign $250 per plate Chef’s Dinner in their home. This was the second such event for Art Works in which chefs donate their time, talent and food to prepare a private meal for a gathering of supporters. Johnson notes that this is form of fundraising is ideal for new launches, since “it is very hard to get funding for new programs when you have nothing to show.”

Last year’s event raised $5,000 for At School After School, an arts program that began at Thomas Stone Elementary in Mount Rainier and expanded to Hyattsville Elementary and other local schools. Since that program has proven successful, it will be easier to seek funding through traditional grant sources, so it seemed appropriate to use the Chef’s Dinner for another launch.

After the crowd of had feasted on the antipasti course, the insalata course, the pasta course and carne course – all prepared by well-known chefs – and before the dolce course, Johnson spoke to the crowd. She shared inspiring stories of the lives of children who’d already experienced the program and about the vision for the new space.

“Our new facility will offer several studios where we now have just one,” she told the crowd. “We will have dedicated spaces for our toddler artists, our painters, sculptors, and digital artists along with a beautiful new gallery space for the exhibition of art by local artists and activists.” The event raised more than $20,000.

The theme has already been chosen for the next major fundraiser, tentatively scheduled for October 12 at the new location. The event will include music, food, and both a silent and a live auction.  The theme: construction.