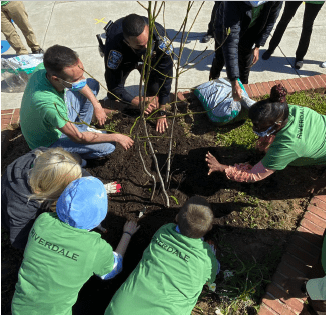 The plan targets 100% clean sourced electricity and zero food waste by 2030. By 2040, the target is 100% clean energy in all sectors, and zero landfill waste.

The school board established a work group on March 1, 2021, charged with drafting a plan for PGCPS to meet those goals.

“Being the 20th largest school system in the nation, and the only system with this comprehensive a plan, we will help other school systems move more quickly,” said school board member Pamela Boozer-Strother (District 3), who co-chaired the work group. “We will reduce emissions throughout the nation, not just here in Prince George’s County.”

Climate education, with an environmental justice focus, comes first in the plan. The plan sets up a new workgroup to revamp climate-related curriculum.

“Solutions to the climate change emergency will require new technology, new infrastructure [and] new career pathways,” according to Donald Belle, a PGCPS environmental educator quoted in the plan. “It is our obligation to put students in the best position to take advantage of opportunities in establishing and emerging fields,” said Belle.

Under the plan, new school buildings will be solar-ready, and fossil-fuel powered HVAC will be phased out.

The school district will modify bus routes to decrease fuel usage, and electrify all buses by 2040.

Boozer-Strother provided insight into the work group’s creation. “It was one of those moments in time that you realize something big is happening right now,” she said.

The school board’s early focus revolved around transitioning to clean energy and updating buildings. Members quickly realized that there were a plethora of other environmental issues that needed to be addressed in schools throughout the county.

The COVID-19 pandemic forced the board of education to put the work on hold. “We were focused on basic needs during the closure — just trying to get laptops and food to families,” said Boozer-Strother.

While the pandemic served as a roadblock early in the process, ultimately, video conferencing made it easier to connect with students and administrators as well as experts from all over the country, according to Jakuta, co-chair of the workgroup and a leader of Climate Parents Prince George’s Campaign.

“Joseph [Jakuta] and I have become unexpected national spokespeople on K through 12 Climate Action Plans,” said Boozer-Strother, “our plan was nationally known the day it was posted, well before it was even passed by the board.”

PGCPS should be able to execute its climate plan without having to rely on additional funding or legislation, according to Jakuta. “Pretty much the entire plan could be done without the help from Annapolis,” he said.

However, he admitted that government support funding and legislation could move things along.

In March, 2022, Maryland passed legislation requiring all public schools to reach net-zero emissions by 2045, allotting funds to schools for that purpose.

With approval of the climate plan in the rear view mirror, PGCPS is now focusing on the plan’s execution, starting with electric buses, composting and implementing environmental technologies into school district buildings.

Reducing schools’ carbon footprint will result in “cleaner air, healthier food, less waste and operational cost-savings,” wrote county schools CEO, Dr. Monica Goldson, in an introduction to the plan. In turn, “that will help PGCPS focus our limited resources more equitably and contribute to both better health outcomes and a safer future for our children,” according to Goldson.