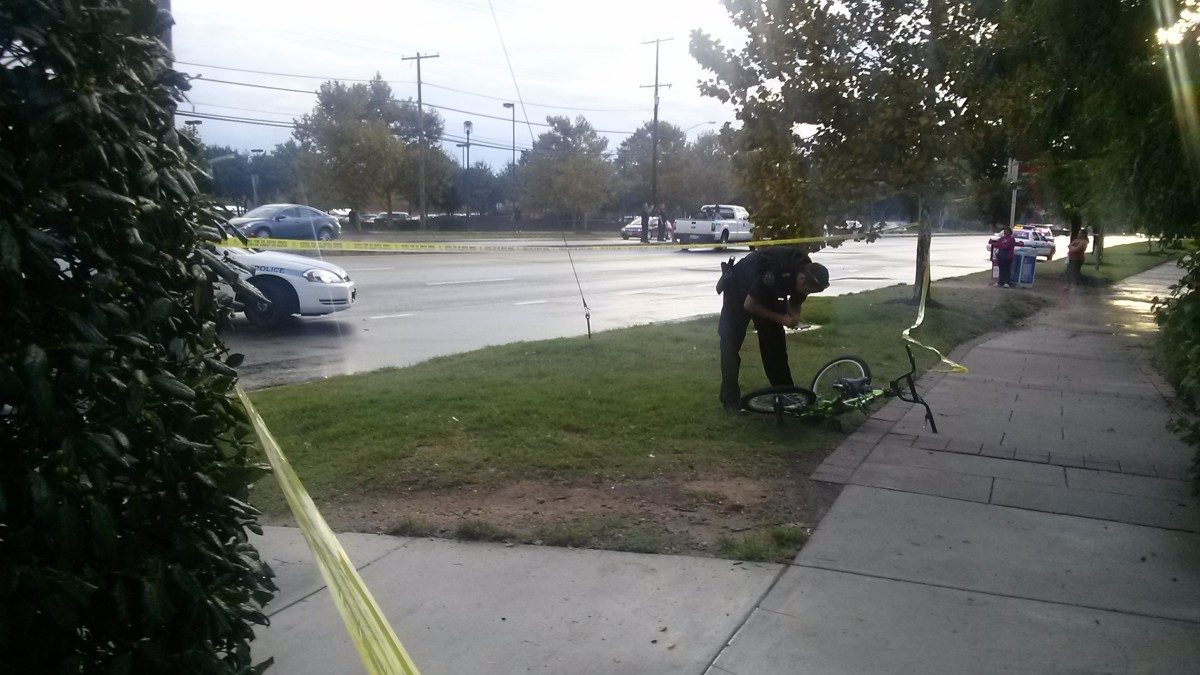 BY REBECCA BENNETT — On August 27, Aimee Condayan of Hyattsville said her nine-year-old son was nearly struck while crossing Jefferson Street. The family was headed towards Elevation Burger.

Condayan said she was holding her four-year-old’s hand when they saw the walk sign flash.  “In what felt like a millisecond, I saw my son step into the street as a large, black SUV flew right toward his path. I froze and screamed my son’s name and the SUV had passed us,” she said.

Elizabeth Pfaffenroth said her family also had a close call on August 28 at that same intersection, just one day after Condayan. “Despite having the right of way, we were almost hit by a driver [who was] turning into the complex on Jefferson from Route 1 going south,” Pfaffenroth said.

Not everyone has been so lucky. Earlier this year, three fatal pedestrian accidents led to the Maryland State Highway Administration (MDSHA) to make high-profile changes on Route 1 in College Park.  Alterations include a reduction in the speed limit from 30 to 25 miles per hour and the installation of a barrier to prevent pedestrians crossing Route 1 except at intersections. A pedestrian-activated signal at Hartwick Road is to be completed by late October.

On September 11, a bicyclist was struck on East West Highway in front of the Mall at Prince Georges. Police believe the victim was in the crosswalk at the time of the collision and cite heavy rain as a factor.

That person survived, but Thelma Flores was not so lucky while walking with her three-year old daughter on September 1. The mother-of-two was killed in the crosswalk at the intersection of Riverdale Road and Kenilworth Avenue in Riverdale. The incident left her daughter fighting for her life. A flashing sign now warns eastbound drivers to slow down for pedestrians.

Then days later, a month after being struck on University Boulevard near Riggs Road, 30-year-old Fredy Gonzalez Hernandez succumbed to his injuries. Police say Hernandez was not in a crosswalk when he was struck August 9.

In her letter to the City Council, the frightened Condayan said, “I…wanted you to be aware of what happened and what could happen to any one of us or our children. My son was inches away from me, but also inches away from the speeding car.”

Councilmembers said the City would like MDSHA to install a left turn signal southbound at the intersection of Baltimore Avenue and Jefferson Street. Currently, drivers turning  into the Arts District retail development must yield to oncoming traffic.

The changes might not be so easy to implement. David Buck, spokesperson for MDSHA, said the agency has, “studied the possibility of adding the SB left-turn signal phasing and based on prior studies, it was not warranted.”

In addition to the left turn signal, Buck said others have asked for a fourth crosswalk to be added on the north side of Baltimore Avenue at the same intersection.

“Engineers are initiating a new (90 day) study based on the latest questions and expect to have additional answers…by the end of the year,” MDSHA said in a statement.

Condayan encourages those concerned about pedestrian safety to speak at the next  Hyattsville City Council meeting and to fill out an online request for service with the Maryland State Highway Administration.