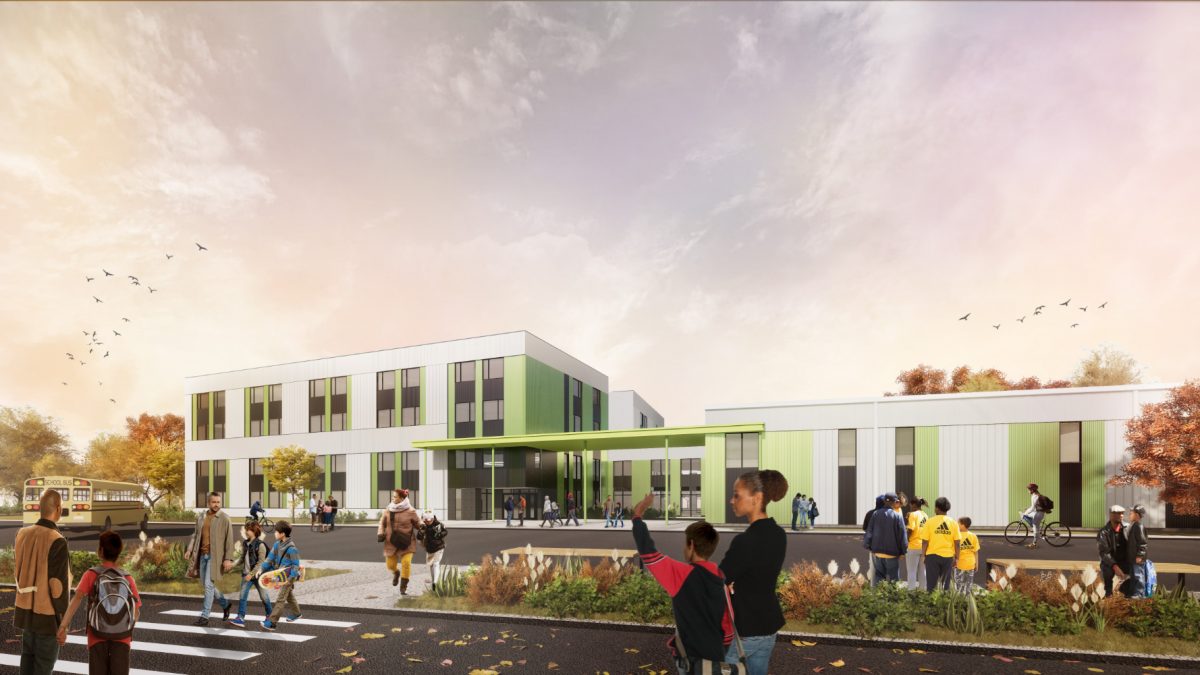 A rendering of the design for the new HMS facility: courtesy of Prince George's County Schools
Hyattsville

PGCPS will be the first school district in the country to build schools through such a process. Maryland has been using a similar financing and construction partnership to build the Purple Line; progress on that project recently halted due to a dispute concerning cost overruns.

According to Jason Washington, who directs the P3 project for PGCPS, the team will finance the construction and maintain the buildings in exchange for thirty years of payments of $29.8 million per year. These payments will not start until the buildings are ready to be occupied. The total cost of the project will be $1.24 billion, according to a PGCPS fact sheet published on Oct. 13.

Opponents of the ACF partnership, including Board of Education representative Raaheela Ahmed (District 5), as well as Our Revolution-PG County, a “progressive advocacy group working to organize, educate, and take action for economic and social justice on the grassroots level,” have criticized the partnership as being too risky and expensive.

On Oct. 19, PGCPS held a virtual town hall to discuss the alternative financing strategy. Approximately 18,000 people attended, mostly PGCPS parents. Prince George’s County Executive Angela Alsobrooks spoke about the importance of the financing process, citing it as “an efficient and cost effective way that we can provide adequately for our students.”

Monica Goldson, the CEO of PGCPS, stressed the dire need for new facilities, noting that Hyattsville Middle School (HMS) is 82 years old. She said the district could cover the cost of the project through earmarking approximately 10% of its capital improvement budget per year.

At the Oct. 21 Board of Education meeting, Ahmed questioned the motion to approve the ACF partnership. “Why are we putting a Band-Aid over the leak when we should be fixing the whole pipe?” she asked, calling instead for an audit of the PGCPS capital improvement program.

Multiple board members spoke in support of the motion. “I am not sure why this … is controversial,” said K. Alexander Wallace (District 7), mentioning students who “had to wear coats [inside their school] because the heat didn’t work.” The motion passed with 11 votes in favor, one opposed and one abstention.

The next step in the P3 process is a 90-day exclusive negotiation period, during which the parties will “finalize deal terms, finalize the Project Agreement … and commence and complete commercial and financial close,” according to the Board Action Summary. The summary states that the cost can be adjusted down during this period, but not up.

At the Oct. 15 Hyattsville Educational Facilities Task Force meeting, Jason Washington, who directs the P3 program for PGCPS, described the design for the new HMS. Like the other five schools, HMS will have a wellness center that will provide some health care services to the community. Washington said that the old HMS building will likely be demolished in August or September of 2021. He said it was probable that many components would be precast off-site to mitigate disturbance to the neighborhood and then moved onsite in the spring.

HMS will have a steel-frame, four-story design. Washington stressed that no functionality would be lost in the redesign. “If you had it going into this process, we’re gonna make sure you have that coming out,” he said. The school will also be built to LEED [Leadership in Energy and Environmental Design] silver standards.

Nature Nearby: A nice-smelling invader

Then & Now: Details, details – the devil is always in the details

Hyattsville Life and Times, 4 years ago 4 min read
Beyond Hyattsville

Hyattsville Life and Times, 8 years ago 1 min read
From the Editor