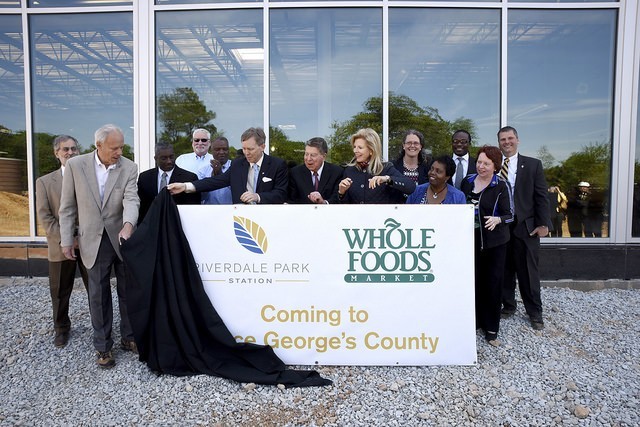 BY REBECCA BENNETT — Dozens of officials from the State of Maryland, Prince George’s County, Riverdale Park, and University Park gathered on Thursday for the ceremonial unveiling of a sign which marks the new Riverdale Park Station Whole Foods.


Developer Jane Cafritz announced that a Hyatt House boutique hotel will also be a part of Riverdale Station.  According to the county executive’s office, the development is also expected to bring high quality retailers, townhouses and a pedestrian bridge across the adjacent CSX railroad tracks that connect to the M Square research park.

“I want [Riverdale Park Station] to be a point of pride for Prince George’s County,” the Cafritz’s said.

Riverdale Park Mayor Vernon Archer said, “Well over 8 years ago … Jane [Cafritz] came to my office to talk about what could be done on this property that was favorable to Riverdale.”

“I have no doubt your companies are going to thrive in this area,” Councilmember Dannielle Glaros (District 3) said about Hyatt House and Whole Foods.

“We have seen over the last five to seven years how dynamic Hyattsville has become,” Senator Paul Pinsky (District 22) said, also referencing the development at Riverdale Park Station and along Route 1. “You can have commercial and retail and have stable communities.”

“Projects like this demonstrate the potential of what started in Franklin’s [Restaurant, Brewery and General Store], continued in the Gateway Arts District and was accelerated by Busboys [and Poets], “Brad Frome said, who is the assistant deputy chief administrative officer for county economic development and public infrastructure. Officials Thursday credited Frome with a great deal of work behind the project.

“We on the [county] council talk about bringing the world to Prince George’s County. You are doing it,” Franklin said.

Glaros said, “Thirteen years ago my husband and I moved to this area. We fell in love with the historic character of the area. … This is truly a treasure.”

“When you look at Route 1 and what it is going to be … it’s neighborhoods,” Baker said. “It’s places where people are going to stop and shop with neighbors.”

Riverdale Park Station, according to county officials, is expected to employ more than 460 full-time employees, be home to more than 700 families and bring in nearly $5 million in annual county tax revenue.