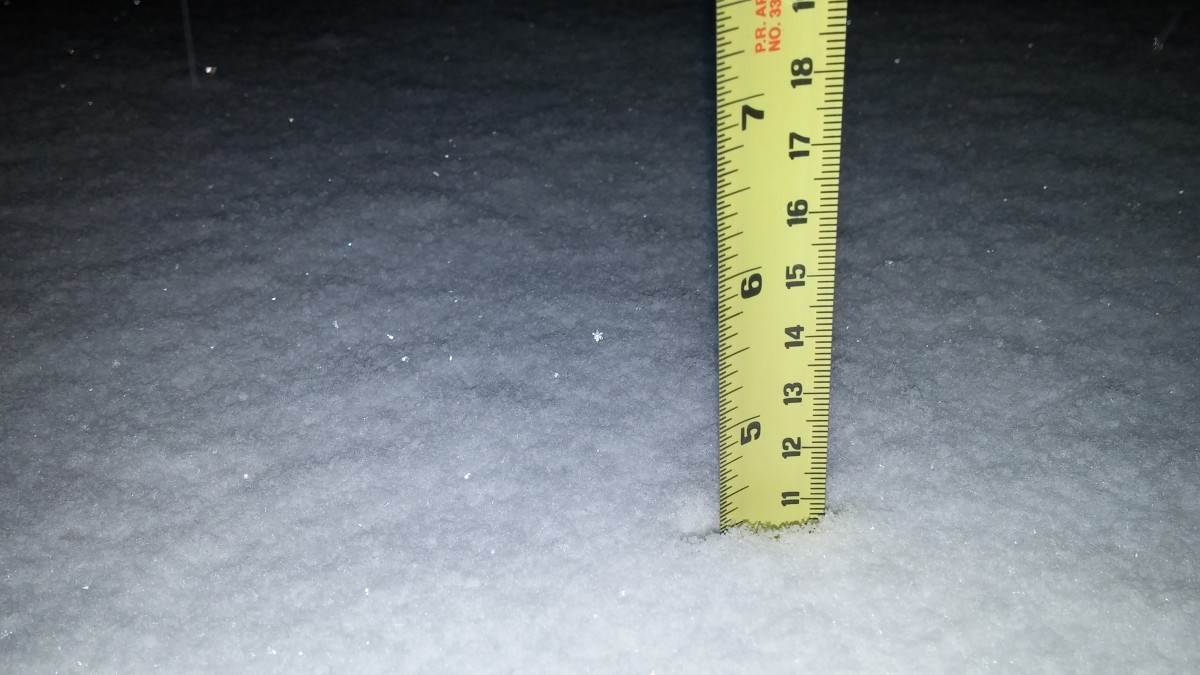 As of just after 2 a.m. Tuesday, at least 4 inches had accumulated in Hyattsville. Photo courtesy Rebecca Bennett.
Beyond Hyattsville

BY REBECCA BENNETT — Updated at 2:42 a.m. Click here for Tuesday closures and openings. The National Weather Service (NWS) has issued a winter storm warning for Prince George’s County and the entire Washington, D.C. metro region from 4 p.m. Monday until noon Tuesday.  The NWS says that it is possible from 6 to 10 inches of snow could accumulate. ABC7 meteorologists say 5 to 8 inches is likely for our area.

The first snowflakes started falling in Hyattsville around 3:40 p.m. Snow is expected to develop late afternoon and the heaviest snow will continue through tonight, according to NWS.

According to City of Hyattsville Department of Public Works (DPW) Director Lesley Riddle, city DPW crews will be on duty plowing and treating roadways all of Monday night and Tuesday morning. “Residents are asked to stay off the roads during this storm if possible,” she said.

The City of Mount Rainier has issued a snow emergency from 7 a.m. to noon Tuesday, according to Mount Rainier City Manager Jeannelle Branson Wallace.  “This of course means that no one should park on any of the city’s snow emergency routes.  The Mount Rainier Police Department will issue parking violation notices and will begin towing as necessary after 7:00am,” she said.

As of 5:30 p.m. Monday, the Maryland State Police activated the snow emergency plan for Prince George’s County and surrounding areas, which means that parking on “snow emergency routes” is prohibited until the plan is lifted.

Prince George’s County says it will activate a “full deployment of personnel and contract services” Monday at 3:00 p.m, which includes approximately 250 vehicles.  Crews will monitor and plow the primary and major collector roadways first and then will move into the residential areas, the county says.

The Maryland State Highway Administration (SHA) says it has nearly 2,500 pieces of equipment at its disposal to battle the storm. According to SHA, road crews will add liquid magnesium chloride to salt applications on state roads to improve effectiveness because of the low temperatures.

The county is asking residents to park on the even-numbered sides of residential streets or in their driveways, as well as to shovel their driveways after plowing has occurred and to remove snow/ice from the sidewalks abutting their homes and businesses.

According to the City of Hyattsville municipal code, residents and business owners have 24 hours after the snow ceases to fall to make sure sidewalks are clear.  According to Branson, the Mount Rainier city code also states that snow and ice must be removed from sidewalks in front of homes and businesses with 24 hours of the last accumulation.

“With the slick roadway conditions expected with this winter storm, motorists are encouraged to stay off the road,” said Darrell Mobley, Prince George’s County Director of the Department of Public Works and Transportation. “If you must travel, please add extra travel time, stay alert and drive slowly; and stay well behind the salt trucks.”

The NWS urges that people only travel in an emergency during the storm, and that if folks must travel, to keep an extra flashlight, food, and water in the vehicle in case of an emergency.

SHA Administrator Melinda B. Peters says, “We’re urging everyone to avoid travel this evening, overnight and tomorrow morning; it’s simply not worth the risk of being stuck or stranded in these extremely cold temperatures.”

Pepco says power crews are prepared to restore potential outages and it urges customers to report those outages by calling 1-877-737-2662, using the online form, or using the Pepco mobile app.

The University of Maryland, College Park will close early at 3 p.m. Monday.

ON: Yoga with Brooke Kid from 6:30 to 8 p.m. at Joe’s Movement Emporium is ON for Monday night.

Big Bad Woof says it will be closing 1 hour early at 7 p.m. Monday evening at both locations (Takoma and Hyattsville).

The Prince George’s County Department of Parks and Recreation says evening classes and activities beginning at 7 p.m. or later are cancelled for Monday and facilities will close at 9 p.m., unless already scheduled for rental events.

According to Franklin’s Restaurant, Brewery and General Store, it is closing Monday night at 8:30 p.m.

Busboys and Poets in Hyattsville is staying open until normal time of 11 p.m. Monday.

Yes! Organic Market in Hyattsville is staying open until the normal time of 10 p.m. Monday.

The Giant on East West Highway in Hyattsville is staying open until the normal time of midnight. Monday.