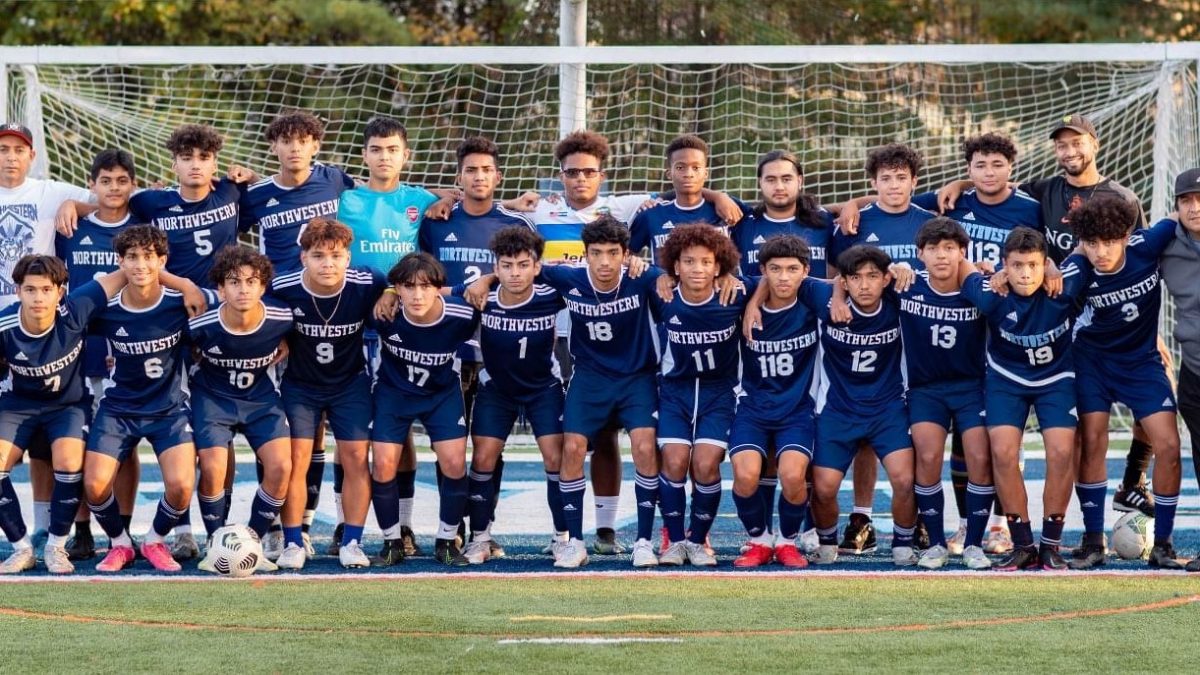 When the Northwestern High School boys soccer team found itself trailing 1-0 Saturday night, it didn’t press or panic. It was the fifth straight playoff game in which the Wildcats gave up the first goal.

You could say Northwestern had Northwest High School just where it wanted.

Early in the second half at Loyola University Maryland in Baltimore, the Wildcats exploded for three goals in a little over five minutes of game time to win the Maryland Class 4A state championship, 3-2.

“[My players] have ice in their veins, and they don’t rattle,” Northwestern Coach Victor Ramirez said. “These guys, at halftime, they’re heads are up and they’re like, ‘OK, time to go play.’”

In winning their 10th consecutive game, the Wildcats (12-2) became the school’s third boys soccer team to win a state title. The first came in 1973; the second in 1995.

“I think they were the best team we played this year,” said Northwest Coach Kert Mease, who this season led the Jaguars (13-3-1) to their first state final game.

Northwest took its only lead when Anthony Polio scored on an assist from Renzo Vargas in the 21st minute. When the first half ended, the Germantown school led 1-0.

That all changed in the 53rd minute: Northwestern’s Josue Guzman took a pass from Jefferson Estrada and scored his team-leading 12th goal. Fifty-six seconds later, Jonathan Argueta-Hernandes found freshman Edenilson Acevedo, who scored from about eight yards out.

In the 59th minute, after dancing around a defender, Guzman fired a 30-yard pass that David Villatoro headed in for his ninth goal of the season and the Wildcats’ third straight.

“We came out strong in the second half,” Guzman said. “We were matching their energy and they had to match ours. I believe that our energy as a collective group is amazing.”

Guzman, a senior midfielder, was clearly the best player on the field and is expected to be named first-team All-Met. He led Northwestern with 14 assists and 38 points. (A player is credited with two points for each goal scored.)

“He is the difference-maker, he is that ‘it’ factor,” Ramirez said. “He gives us that burst of confidence that no matter if we’re down, we’re going to come back and win. The kids feed off of him, his adrenaline, his voice in the locker room. They just have that confidence when Josue’s on the field.”

Mease, the Jaguars’ only boys soccer coach since the school’s 1998 opening, also spoke highly of Guzman.

“He’s extremely creative, and his vision is really good,” Mease said. “And he’s not predictable. He’ll be facing one way and play a ball back across the defense. The other thing is the placement of his passes.

“We’ve seen some high-end guys this year in Montgomery County, but he was a little bit different in that he was more of a playmaker as opposed to a goal scorer. Not that he can’t score goals; he obviously can. But as far as his feet are concerned, we haven’t seen anybody that creative and good at creating space for himself.”

Twelve seconds after the Wildcats went up 3-1, Francis Sarpong narrowed the lead with an unassisted tap-in goal. It was the game’s fourth net-finder in 5½ minutes of playing time.

“It was a great individual effort by Francis to get there, split the defenders and finish that close to the [goal line],” Mease said. “It gave us life because we had a horrific 10-minute stretch where we gave up the three goals. So, to respond like that kind of epitomizes the character of the team.”

Northwest had several opportunities to tie the contest in the final 21-plus minutes, particularly after Northwestern yellow cards gave the Jaguars free kicks. Wildcat junior goalie Luis Romero made two nice saves on long kicks, one just in front of the goal line. In between, Sarpong nailed a shot from about 15 yards that hit the right goal post.

Guzman also displayed his defensive ability late when he, as part of a wall, blocked and cleared Mateo Munoz’ free kick. With three minutes to go, Guzman stole a ball on his team’s side of the field.

“We’ve got the best player in the state of Maryland,” Ramirez said. “He showed it throughout the season, and Maryland now knows that No. 10 is the No. 1 player. I think anyone who watched the playoffs realizes that now.

“I also believe our goalie is one of the best goalies as well.”

Romero finished with two more saves after Northwestern was forced to play the final 5:40 a man down when a player received a red card and was ejected. Despite the advantage, Northwest couldn’t find the equalizer.

“We expected it to be a good game, and it was,” Mease said. “We knew that they were good on the ball, and I thought that at times they controlled the midfield, and we were a little late to adjust. From that standpoint, that was our undoing a little bit.

“They’re very good. They deserved it.”

The Wildcats, seeded fourth in the eight-team state tournament, defeated top-seed Severna Park in Nov. 13 semifinals, 2-1 in overtime. Northwest was the No. 2 seed.

Northwestern won the 4A South Region 1 championship with victories over High Point and Parkdale. It downed Bethesda-Chevy Chase in overtime, 2-1, in the state quarterfinals. The Wildcats’ last loss was Sept. 28.

Ramirez, who graduated from Northwestern in 1992, became his alma mater’s head coach in 2016. He played soccer under Tom Stickles, the man who led the Wildcats to their first two state crowns.

More so than talent, Ramirez said his 2021 team had great chemistry.

“To win a tournament you’ve got to be mentally tough, and I’ve never seen a group of student-athletes at this age have that,” he said. “To me, it’s just amazing. I always tell them, ‘Thank you for allowing me to be part of your journey and witness history.’”