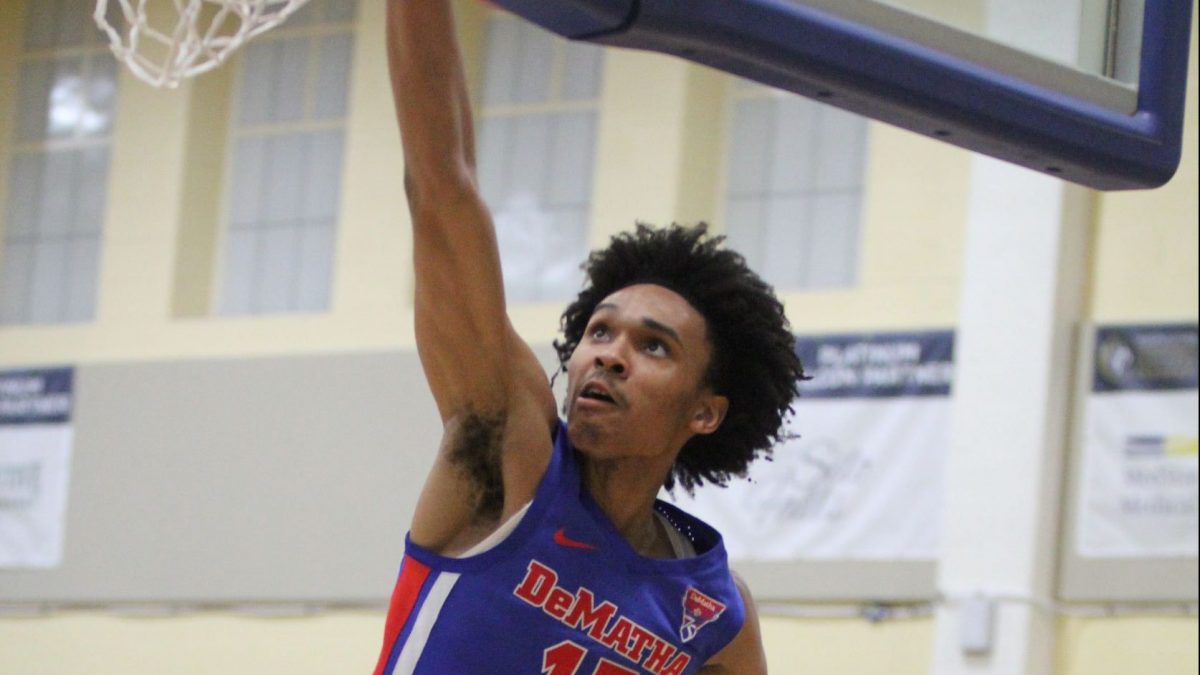 BY CHRIS MCMANES
It was Senior Night at Good Counsel on Tuesday, but for much of the evening the home crowd was dormant as DeMatha built a 13-point lead early in the fourth quarter. However, for the second time this month, the Stags weren’t able to hold a sizable late lead.

With DeMatha faltering and the home team surging, the Falcons stormed back to tie the game and send it into overtime. It was all Stags from there.

“Our execution in overtime was just awesome – offensively and defensively. It was a clinic, and beating a very good team that was at their high at that point,” DeMatha interim head coach Pete Strickland said. “We learned a lot about our team in the overtime. Our execution was as precise and efficient as it can be, on both ends.”

The Stags escaped the Kane Center in Olney with a 79-69 victory to improve to 16-5 and 11-3 in the Washington Catholic Athletic Conference. It was their fourth-consecutive win.

The four-minute extra session began with Ward feeding Roberson for a slam dunk. “Coach called the play in the huddle,” Ward said, “and we ran it almost to perfection.”

Ward recorded his fourth slam dunk of the game a minute later and then blocked a close shot down low. After Isaiah Arnold sank two free throws and Rice nailed a long shot off the dribble, DeMatha held a 71-63 lead with 1:49 to play.

Four more points each from Ward and Roberson closed out the Stags’ scoring. DeMatha went 10-for-10 from the line in overtime. Ward said the key at the end was playing unselfishly.

“We started playing together as a team,” he said. “We were executing the way coach wants us to play.”

Ward restored DeMatha’s lead to three before Corey Chesley hit a 3-pointer from the left corner to tie the game at 61 with 12.8 seconds to play. Falcon fans were going crazy.

“Our bugaboo has been handling pressure late,” said Strickland, whose team lost an 11-point advantage to St. Paul VI and fell in overtime. “But I’ve got to give [Good Counsel] credit at the end of regulation. They made some big plays and some tough shots. So, it wasn’t all self-inflicted.”

Prior to the Stags’ win over the Falcons, they won these two games:

DeMatha 82, Bishop O’Connell 81 – Rice scored 25 points, while Ward and Jaeden Mustaf had 13 each in the Feb. 8 win in Arlington, Va. Ward hit two free throws with 20 seconds left to give the Stags an 82-78 lead. The Knights cut it to one on a 3-pointer, and following a DeMatha turnover, missed a potential game-winning jumper.

“It was a great crowd,” Rice said. “That’s probably one of the best crowds we had all season. That really fueled me up. I feel like I didn’t shoot the ball well, but still made it happen. As a team, we played great.”

DeMatha 54, Archbishop Carroll 46 – Rice’s 17 points and Ward’s 15 paced the Stags at home Feb. 11. DeMatha entered the fourth quarter ahead by just two points. Ward’s triple and Rice’s layup in transition put the Stags on top, 52-44, at the 3:04 mark. DeMatha held the Lions to just one field goal in the final 4:43.

Rice said the key to the fourth period was to “keep staying aggressive, take care of the ball late in the game. That’s been a problem for us. We just tried to fix our problems and mistakes.”

Senior Night vs. Gonzaga – When the Stags host No. 5 Gonzaga (16-6, 10-4 WCAC) on Friday Feb. 18, it will the final home game for seniors Ward, Rice, Jerrell and Aaron Roberson and Bryson Hill.

“I’m so excited to get my last game at DeMatha underway and get started on the playoffs,” said Ward, who will also be honored for scoring his 1,000th career point Tuesday in Olney. The milestone bucket came on a third-quarter fastbreak slam dunk.

The Stags will be looking to avenge an 87-73 loss to the Eagles on Jan. 11. The game against Gonzaga, which was ranked No. 1 at the time, came after a 27-day break between games.

“A big rival, and I’ve got a lot of respect for those guys,” Strickland said. “They got us pretty good coming out of our pandemic hiatus.”

Rice began his high school career as the starting point guard at Bullis in 2018-19. The next season, he sustained a torn labrum in his right shoulder that required surgery and missed much of the year. He transferred to DeMatha in 2020-21.

“It was very tough for me to transition into my junior year,” Rice said. “I didn’t get a preseason. So, I just had to come on and work as hard as I could for my junior season. After that, this summer that just passed, I’ve been working my tail off.”

“It’s been a long four years,” he said. “The next chapter is coming soon. So, we’re going to try to make [the game] a good one.”

Bombs Away – Swinton hit three treys in the third quarter at Good Counsel. Rice assisted on the first two with a skip pass and off an inbounds play. Arnold got an assist on Swinton’s third 3-pointer and made one himself.

Boys and girls play-in games will be held at the higher seed’s homecourt on Thursday Feb. 24. The four boys quarterfinal games are at Robinson on Feb. 26. DeMatha will host the girls quarterfinals on the same day.

Robinson will host the boys and girls semifinals Feb. 27 and the two championship games Monday Feb. 28.

The Stags won the last WCAC boys championship in 2020. The event was not held last year.

Rankings – The WCAC is well-represented in The Washington Post Boys Top 20. St. Paul VI checks in at No. 1. Bishop McNamara is third, DeMatha fourth and Gonzaga fifth.

O’Connell is ranked 15th and St. John’s 19th. Paul VI and McNamara sit atop the conference standings at 11-2.

The Stags will finish the regular season with a makeup game at St. Maria Goretti in Hagerstown on Sunday Feb. 20 at 2 p.m.

Reforms to county school board proposed