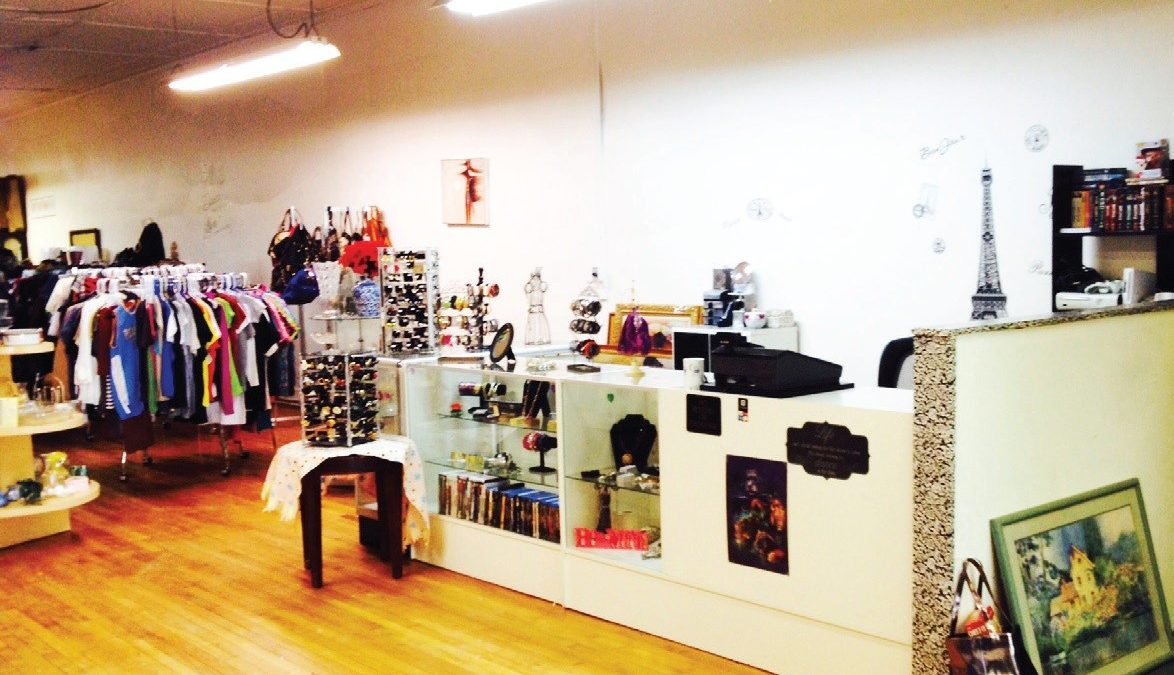 Growing up outside New York City, I spent many a weekend scouring the antique clothing stores of the East Village for that perfectly worn-in vintage T-shirt or a faux fur coat fit for one of the Isley Brothers. But it was the consignment shops in and around my quaint New Jersey hometown where I picked up some of my favorite scores, like a Fair Isle wool sweater that I still wear to this day or a pair of vintage Charles David riding boots that I eventually sold on eBay. And since those local spots weren’t paying big-city rent, I still had some babysitting money left over.

That’s why I love where we live. On one of our many local thrift stores’ 50-percent-off days, I can pick up an entire spring wardrobe for my kids for $20! Or a set of cherry dining chairs in need of a little wood glue and polish for a fair price.

So imagine my delight when Sarah’s Treasures opened in December right on Baltimore Avenue (5307, next to Mastertax). Owner Sarah Petrus says after she built up her inventory for the store by picking up unwanted treasures at local storage unit auctions. She would first unload the stuff at yard sales, but Petrus says she’d always loved going to thrift stores and it was her dream to someday open one of her own.

“I decided to open up in this area because it’s building up a lot, it’s nice and it’s safe. Plus, it’s the Arts District, and we [carry] a lot of art,” says the Riverdale Park resident. The new store benefits the Arts District as well, she adds, because it fills a space that was vacant for more than two decades.

Though presently in a month-to-month lease, Petrus says she has the option of signing a longer-term lease once the business takes off and so far, things are going well. After about six weeks of being open, donations started pouring in, most of the items in good condition, she says.

The store sells books, DVDs, furniture, housewares, clothes and more. And it’s a large enough space that she can use about half of it for storage and still keep the other half organized and easy to navigate. There’s even a little toy room in the front that contains children’s books and electronics.

Another thrift store, Fecosasa, remains at the The Shops at Crittenden Crossing (4806 Rhode Island Avenue). I’ve popped in there on occasion and found nice kids’ clothes with the tags still on them. They also have a wide array of $2 DVDs, small electronics and accessories — even the occasional wedding dress on consignment. But the space is small and cramped, and gets a lot less foot traffic than stores in the Arts District.

Fecosasa retail associate Jay Banks says the business is more concerned about its “dead end” location than a new thrift store in town. Banks says he and Fecosasa owner Caroline Sirri, who opened the shop two years ago, are hoping that the vacant retail spaces around the store — including the planned ArtWorks space — will soon get filled.

“The economy’s been tough; I’m not gonna lie,” said Banks. “But we’re determined to stay here to see this area elevated.”

Regarding her competition down the street, Petrus says having another store nearby just increases shoppers’ chances of finding that perfect treasure. “Ours is a little bit bigger and more organized. Everyone does their own thing. She has nice things, but you have to dig. And people like doing that. Maybe I have something that she doesn’t have, or maybe she has something that I don’t have.”

While there’s nothing in particular that Petrus says Sarah’s Treasures is looking to acquire more of, I highly encourage the families of Hyattsville to consider donating their gently used toys and baby clothes to this store, as the toy room could use some padding out and the kids’ clothes are likely to go fast. Happy hunting!

Lauren Flynn Kelly lives in Hyattsville with her husband and two little girls. She works from home writing for a Washington, D.C., newsletter publisher and has written about everything from soap operas to sailing. Secondhand News is her love letter to thrifting, repurposing and the thrill of finding hidden treasures in and around Hyattsville.

City staff does not support rezoning of Clay Property

Hyattsville Life and Times, 6 years ago 4 min read
Nature Nearby

Nature Nearby: Breaking news! A tree fell in the forest