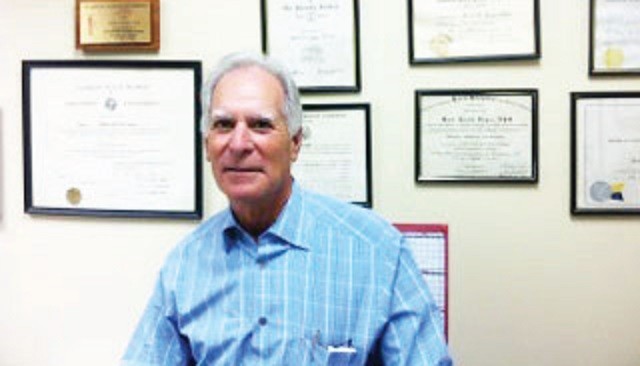 BY MAX BENNETT — When Dr. Mark Sugar hung up his lab coat at the end of October after practicing on Belcrest Road for nearly four decades, it marked the first time in about 70 years there will be no Dr. Sugar in the Hyattsville area.

The streak began with his father, Dr. Sam Sugar, a general practitioner who opened his office in 1945 at the corner of Eastern Avenue and Queens Chapel Road.  As a teen, recalled the son recently, “I used to go from high school, take a bus, go to his office, and work.”

There, he learned the basics of medical practice. Back then a general practitioner did nearly everything that specialists do today: lab work, x-ray exams, deliver babies, and of course the idyllic house calls.“He taught me how to draw blood, he taught me how to do cardiograms,” said Sugar.

Two of his uncles were doctors, too. But it was Dr. Herbert Rothfeld, a podiatrist in his father’s medical building, who became Sugar’s mentor. After graduating from Temple University’s podiatry program, Sugar worked for Rothfeld for a year. Then, after an intensive surgical residency in Detroit, he worked out of his father’s office until he found the location just two miles down Queens Chapel Road where he has practiced for 38 years.

Sugar and his wife, longtime residents of Rockville, have three adult children and four grandchildren, with a fifth on the way. For now, the couple plans on spending a lot of time at their Florida home enjoying golf weather.

“It feels good out there,” he said, referring to the chilly late-October morning, “but a steady diet of [cold] is not my cup of tea anymore.”

Sugar considers himself an old-fashioned doctor, acknowledging that his office has been somewhat limited in new technological advancements in podiatry. That is one reason he was pleased to hand his practice  to Dr. Johny J. Motran on November 1.

“I’ve got big shoes to fill,” says Motran, who had his own practice in Gaithersburg for three years before agreeing to take over Sugar’s practice. He said he plans to keep many of the more traditional elements of the practice, particularly regarding the patients. “He’s very compassionate, and I think we are similar in that respect,” said Motran.

The practice will continue to offer the many of the current services, while Motran adds new techniques and procedures such as laser treatment and ultrasound.

“He’s going to make this a state-of-the-art practice,” said Sugar.

Motran is a graduate of University of Maryland and Temple University, where he studied podiatry. He went to Baltimore for a three-year residency then worked for a doctor in Hagerstown for five years before opening his Gaithersburg practice.