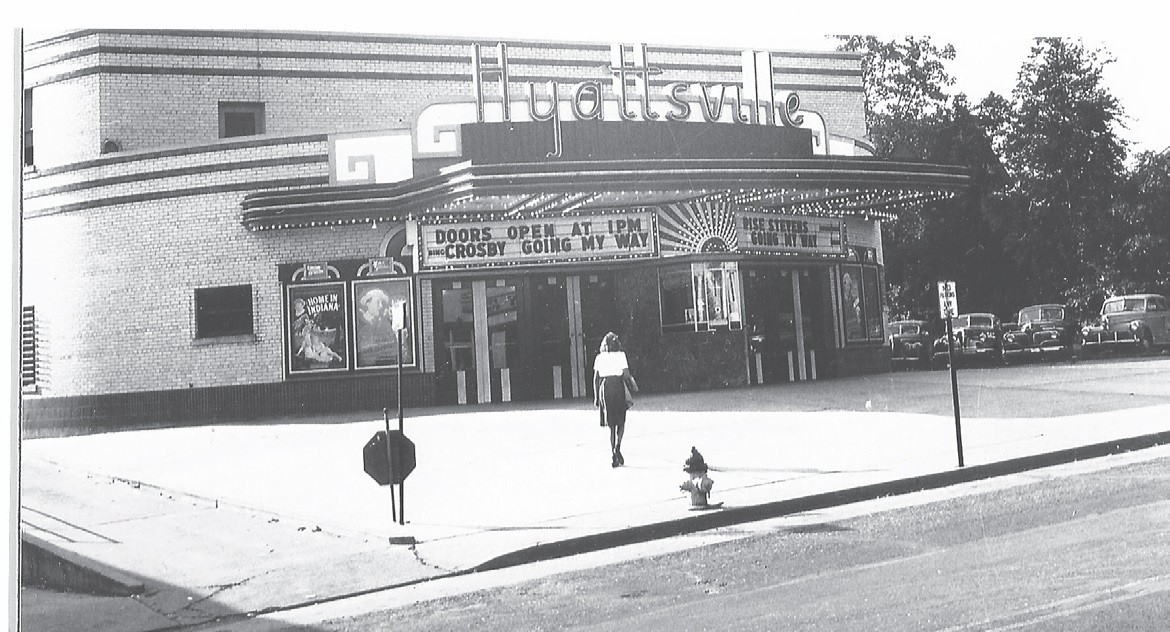 An undated photo of the Hyattsville movie theater, which opened on Baltimore Avenue in November 1939. Photo courtesy Peggy Dee.
Art

I recently had the pleasure of meeting a delightful 88-years-young gentleman, John Small, who grew up in Hyattsville.  Although he now resides in Montgomery County, his heart remains here.

As he was born in 1925, John saw the effects of the Great Depression.  His father was out of work for several years, so the family moved several times in our city before finally settling on Arundel Avenue (now 42nd Avenue).  John attended the Hyattsville Elementary School and the old Hyattsville High School.

While he was in high school, World War II began. John enlisted in the Navy and did not graduate with his class in 1943.  He returned three years later and became a resident of Nicholson Street.  He received his high school diploma from McKinley Tech High School in Northeast Washington.  He has such fond memories of taking the old Potomac Park/Branchville streetcar into school each day.

In 1947, he began working at an insurance company in Washington. He met his future wife, Betty Jean, on his first day there. They were married in 1948 in the old Hyattsville Presbyterian Church located on Farragut Street at 42nd Avenue.

John took me on a delightful trip down Memory Lane as he discussed his happy childhood days here in Hyattsville.  He took his first date to the opening night of the Hyattsville movie theater on Baltimore Avenue, in November 1939. And before this theater opened, John spent many a fun-filled Saturday afternoon at the old Arcade theater on Gallatin Street.  This building was purchased by our city a few years ago.

Neighborhood kids arrived at noon each Saturday, where they saw two films and a cartoon for a mere 25 cents.  In between the films, the children were invited  on stage to perform.  Each child was given a free gift.  The popular Dave Ginsburg was always the master of ceremonies.  In the basement of the theatre was a pool room and a bowling alley.

Spending summer days at activities in Magruder Park is also a vivid memory for John.  There was a full-time attendant at the park  each day and the kids participated in softball,  shuffleboard and badminton. When it snowed, the City blocked off Jefferson Street from 40th to 42nd so the children could sled down the hill.  To get warm afterwards, the kids headed down to Baltimore Avenue, where they enjoyed treats at the Federal Diner or Tony George’s Confectionary Store.  The old Woolworth’s Five and Dime Store was also a popular spot.  John  worked part-time there  when he was just 14 —  which, In those days, was the minimum age for  employment.  Seeing so many friends and neighbors coming in for holiday shopping, delighted John.

In addition to the old Branchville/Potomac Park streetcar line, the Greyhound Bus traveled along Route 1, with service to Washington and Baltimore.  Dudrow’s Drug Store, which was in the 5300 block of Baltimore Avenue, was the official Greyhound stop for Hyatttsville for points heading north. Tickets could be purchased at Dudrow’s.  Peoples Drug Store, directly across the street, was the stop for points heading south or into Washington.

The Maryland National Guard Armory on Route 1 at Jefferson, was the scene of many social activities.  The residents participated in roller skating and dances.  After Pearl Harbor was attacked in 1941, the Armory was the scene of a large civil-defense rally, which also included a visit from Maryland governor Herbert R. O’Conor.  After the happenings at the Armory, the participants walked across the street to the old Hot Shoppes restaurant where they warmly completed their evening.

I enjoyed so much my afternoon with John Small and hearing how life was lived here in our dear city in days gone by. He had many pictures to show and stories to tell.  Even though they did not have computers, many cars on the roads, or televisions, life seemed fulfilling in so many other ways.

Tags #postcards from the past
Previous

Hyattsville Life and Times, 3 years ago 4 min read
Beyond Hyattsville

A Community divided: Against the Werrlein Properties' development proposal