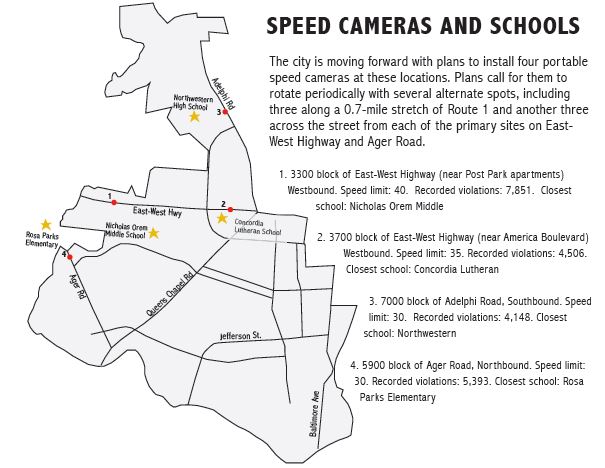 BY SUSIE CURRIE — A traffic study has identified four primary spots for speed cameras in Hyattsville. During their first year, the monitoring devices are expected to issue a total of 480 citations a day to drivers on East-West Highway, Adelphi Road and Ager Road.

During the week of February 7, speed-camera vendor Affiliated Computer Services (ACS) surveyed 19 locations in designated school zones throughout the city. Maryland law defines where, when and how the cameras can operate: within a half-mile of a school, Monday through Friday from 6 a.m. to 8 p.m., recording speeds of at least 12 miles per hour over the posted limit.

Under those conditions, four test areas logged a combined 21,898 violations during the week-long study. Those are where the portable speed cameras will be most of the time (see chart). But they will rotate among six additional sites, which saw a total of 19,545 violations over the same period. Their locations, including any changes, are to be posted on the city website.

A March 22 police memo to the mayor and council proposed issuing written warnings for the first 30 days. After that, violations will incur a $40 fine, sent to the owner of the vehicle as identified by license-plate images.

A Maryland State Highway Administration brochure says that “in a school zone, staying alert and obeying the posted speed limit is imperative for public safety.” That’s why the cameras aren’t supposed to ticket on weekends. But the 14-hour weekday schedule runs year-round, whether school is in session or not.

“Speed cams do not get spring break or summer vacation,” says Ron Ely, who operates an independent website dedicated to the Maryland law regarding the devices.

In 2009, the state legalized speed cameras. By the end of 2011, according to Ely, it was home to more than a quarter of the 106 programs in the United States.

The Hyattsville City Council approved automated speed enforcement in March 2011 and had budgeted a full-time police-department position for the current fiscal year. That employee would be responsible for, among other things, running both the red-light and speed-camera enforcement programs. But before officials determined the scope of the program, the hire didn’t make sense.

“It’s time to enact the speed camera program,” said Mayor Marc Tartaro during a recent council discussion. “While there are many perspectives … the evidence continues to mount that speed cameras save lives. Public safety is a key consideration for the city.”

Bestway lives up to its name

Hyattsville Life and Times, 5 years ago 4 min read
Nature Nearby

Hyattsville Life and Times, 9 years ago 3 min read
From the Editor

From the Editor: Mutiny on the Council