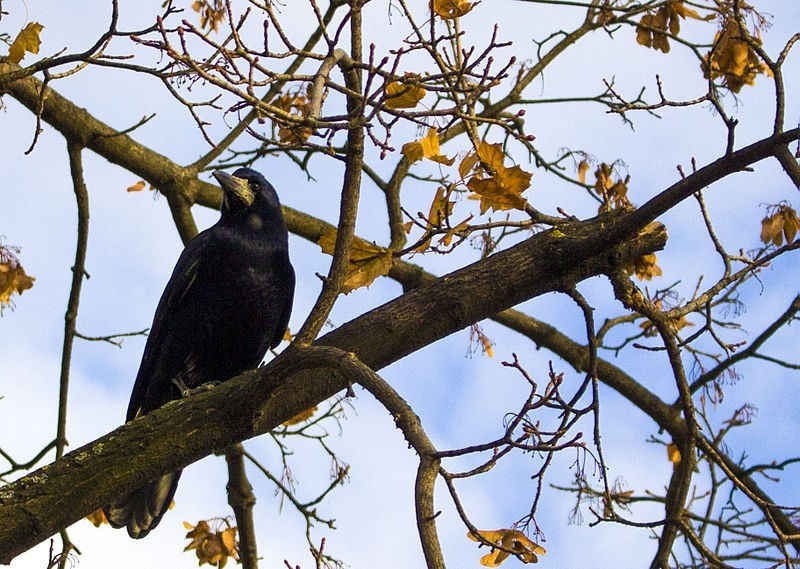 BY FRED SEITZ — The abundant gatherings of one of our most common and vocal “songbirds,” the common crow, will either amuse or annoy locals walking or driving in fall and early winter.   This season is when we often witness some of the most gregarious behavior of the large (about 18 inches long), glossy black birds with squared off tails.

Roosts may contain hundreds of crows, and both morning departures for food and evening “pre-roostings” may have large numbers of birds in flight with their accompanying familiar cawing. These morning and evening flights may cover a distance of 50 miles or more. The cawing familiar to everyone is one of over 20 calls the birds produce, but is most commonly heard in fall. One of the crow’s alternative vocalizations, the comb call (which sounds like a loud version of flipping the teeth of a comb) is also heard occasionally. However, it is more common during mating season in the spring when crows are somewhat less gregarious and also more secretive and more territorial.

Crows do not reach sexual maturity until aged 3-5 years. In the wild, crows typically live up to 30 years, but in captivity, they have reached ages over 50.

Our “common crow” (also called American crow) is one of 40 species of crows worldwide, including the “stately raven,” blue jay and jackdaw. Crows are believed to have evolved originally in Asia and spread and developed various species in different countries. Australia alone has six species.

Maryland inhabitants include our common crow, the fish crow and our famous raven. Fish crows are a bit smaller and with a more nasal caw than the common crow and as their name implies are more inclined to waterfront living. They are frequently found near the Chesapeake Bay and the Potomac River. Ravens are a bit larger, about 24 inches long, with thick feathers at the throat and a wedge-shaped tail. Ravens are mostly found in more westerly parts of Maryland in more mountainous regions.

While often maligned for their raids on crops (notably corn), crows are consumers of mice, insects and most helpfully roadkill. The birds’ abundance and damage to crops has spawned a variety of methods to reduce or control our corvid friends, ranging from the classic scarecrow to poisons, which are now prohibited due to their threat to other animals. Crows have also been hunted for food.

While less eloquently poeticized than his famous cousin, the raven, the crow has shared in many ominous, but also sometimes beneficial spiritual stories and folktales. In some cultures, crows have been characterized as harbingers of death, evil and ghostly spirits, whereas others have characterized crows and ravens as tricksters who brought fire to humans or beings that brought knowledge to mankind.

Indeed, science has offered some evidence of crows’ intelligence, observing some crow species modifying sticks to use as a “tool” to extract food from narrow areas and also to recognize and differentiate human faces.

So despite their noise and possible bad omens, consider that our feathered friends are watching us and contemplating our place in the scheme of things.