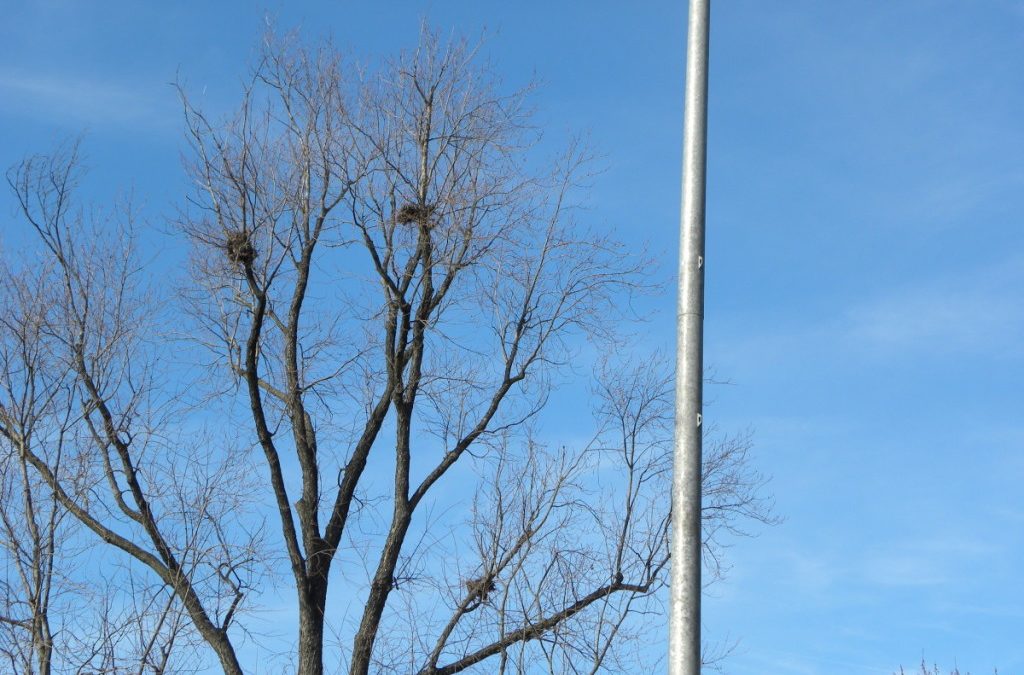 BY FRED SEITZ — The recent big drop of leaves has revealed homes of many Hyattsville residents that we see and hear for much of the year, but often take for granted.  A single Norway maple near the tennis courts in Magruder Park has at least four nests (see above) that were hidden by foliage during the spring and summer.
Some are bird nests.  But at least one belongs to one of our most ubiquitous rodents, the gray squirrel. Large bundles of leaves are now visible in the crotches of many trees throughout Hyattsville, attesting to the high concentration of this most familiar mammal.
Of the three large tree-climbing squirrels in Maryland, the gray squirrels are the only ones in this area. (The endangered Delmarva fox squirrels are limited to the Eastern shore and mostly live in loblolly pines; red squirrels live further west in the state and have a preference for evergreens and pinecones.)  In their melanistic form, they are almost entirely black. These black squirrels are descendants of a group that was brought from Ontario to the National Zoo. Some escaped and have spread to many areas near Washington.
The abundance of gray squirrels today is stunning compared to the late 19th and early 20th centuries.  Much of the Eastern U.S. forest had been cut at that time for farmland and there was concern that the gray squirrel could become extinct.  However, they have recovered and thrive in the suburbs and parks throughout the area.
Gray squirrels will eat pinecone seeds, but are best known for harvesting nuts like acorns, hickory and beech.  When they bury the nut in the ground, they push it in with their noses.  This  helps to scent-mark the spot,  making it easier to find when hunger calls. They are also fond of many agricultural crops, such as corn, but will eat tree buds and insects when nuts and other foods are not available.
They breed twice a year, in the spring and fall, giving birth to between three and five young each time.  Their nests are occasionally raided by raccoons, which will augment their diet with the helpless baby squirrels. The surviving young can leave the nest in about 4 to 5 weeks.
The grays do share this area with both Southern and Northern flying squirrels, both of which are exclusively nocturnal. Though seen far less often, they may be as plentiful here as their gray tree-climbing cousins.
As anyone with a bird feeder can attest, both the gray squirrels and the flying squirrels are frequent raiders of these backyard pit stops. You can increase the chances of seeing a flying squirrel by having a light near the bird feeder and periodically turning it on at night.
The night light at the feeder may also reveal some other nocturnal visitors, such as mice collecting fallen seed, early evening birds and cats who may prey on any of the other visitors.

From Rome to Hyattsville: an Italian resident’s journey to the US

From Where I Stand: We must all do more to stop gun violence