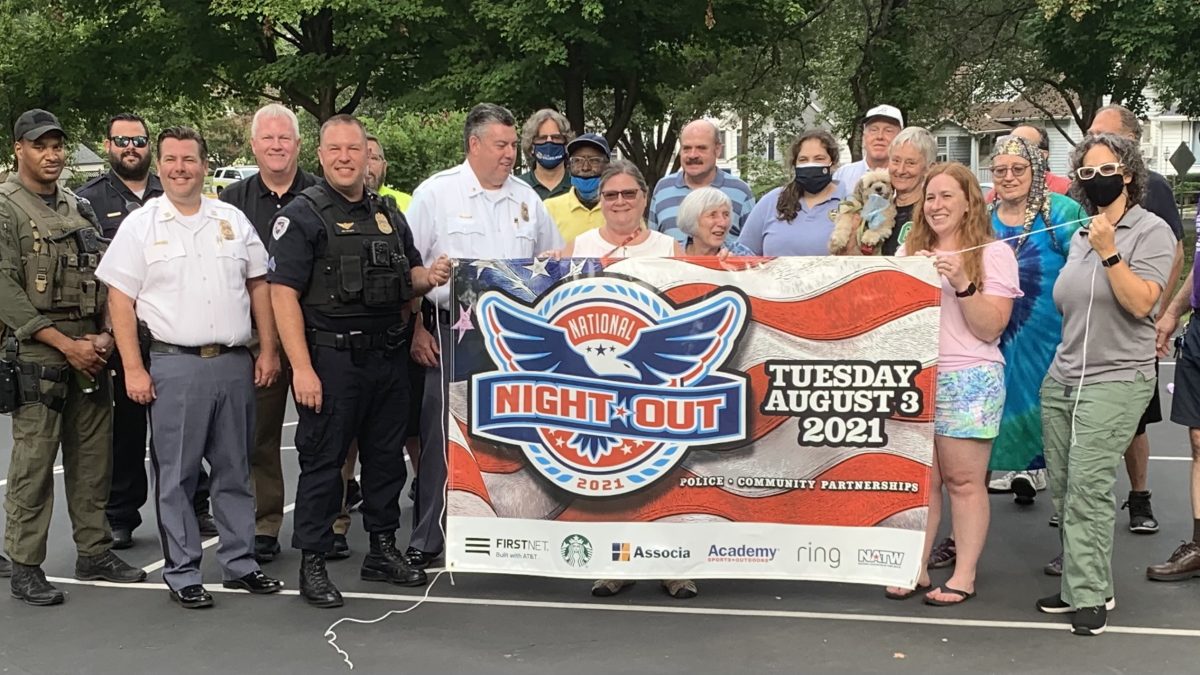 For decades, National Night Out celebrations have involved millions of Americans, all over the country, throwing block parties and cookouts while discussing important issues with law enforcement officers in these informal settings. The COVID-19 pandemic put a temporary hold on this tradition last year, but College Park’s National Night Out was back in full swing, in five locations, on August 3. Turnout was high, with more than 100 people at the Duvall Field event, alone.

“Because of COVID, we were a little worried that not many people would show up, but we were very pleasantly surprised,” noted Councilmember Fazlul Kabir (District 1)

Lakeland Park’s event also had a healthy turnout, and the atmosphere was lively, as longtime friends and newcomers struck up conversations. Robert Thurston, president of the Lakeland Civic Association, was enthusiastic about the event.

“It’s nice to have everybody here,” he said. “If we’re going to have a crowd of police, this is the time to have it. It’s a positive neighborhood thing.”

“They are a part of our community, so thank you very much,” he told the crowd, who joined him in applauding the volunteer firefighters.

The Lakeland Park event was organized in part by the University of Maryland Police Department (UMPD), and a number of officers with the department attended the event. An officer with the university’s police department brought his police motorcycle along, which was a hit with kids at the event.

The Lakeland Park National Night Out included a scavenger hunt for children, focusing on historical facts about the Lakeland community. Kids who participated in the scavenger hunt were awarded backpacks full of school supplies. In the lead-up to the event, Thurston recruited local businesses to participate in the backpack giveaway. Instyles Barber Shop jumped at the chance, donating $150.

Berwyn Neighborhood Park’s event included refreshments and a corn hole competition. Officers with the Prince George’s County Police Department were on site, along with their large, armored police vehicle called a Lenco BearCat. The BearCat was especially popular with children, who had a great time climbing inside and exploring.

According to Cpl. Nick Leonard and Maj. Robert Holland of the Prince George’s County Police, these vehicles are not used for regular patrols. They are typically used during hostage situations, particularly if a suspect has barricaded themselves inside a structure.

“There’s assumptions at the community level, and some politicians think that we just patrol in those things, like we’re an occupying force. They’re only used for tactical things,” Holland said. “We bring it out to try to show it to the community, in a non-threatening situation, when we’re not in the middle of being actively involved in a tactical situation.”

College Park Woods Neighborhood Park and Cherry Hill Park also held National Night Out events. Councilmember Maria Mackie (District 4) attended both and said there were more than 20 residents at each event, along with police, and city and county officials. Neighborhood watch volunteers organized these events, and Mackie showed her support for the organization.

Kabir underscored that College Park’s neighborhood watch has room to grow. “We had some residents come and express interest in joining, but we need to help the different parts of the neighborhood blocks to form their own neighborhood watch block and get them connected with the police officers,” he said.

Mary Cook, president of the North College Park Civic Association, said events like National Night Out are designed to bring residents and police closer together.

City councilmembers and organizers of the city’s National Night Out events said that promoting communications and positive relationships between residents and police departments is a high priority. These relationships have especially been in focus in the aftermath of the murder of George Floyd by former police officer Derek Chauvin.

An officer with the university’s police department noted Floyd’s murder and acknowledged that police can work to rebuild trust with the communities they serve. She saw the National Night Out events as an opportunity to do just that, and underscored that sentiment: “We wanted to be out here to build trust and try to rebuild that community relationship.”