BY HELEN LYONS —  With Election Day coinciding with publication of November’s Hyattsville Life & Times, Hyattsville citizens have headed to the polls to declare their choice for the 2016 presidential race.

An analysis of data obtained from the Federal Election Commission (FEC) regarding individual campaign donations provided insight into a city that’s home to diverse political viewpoints. 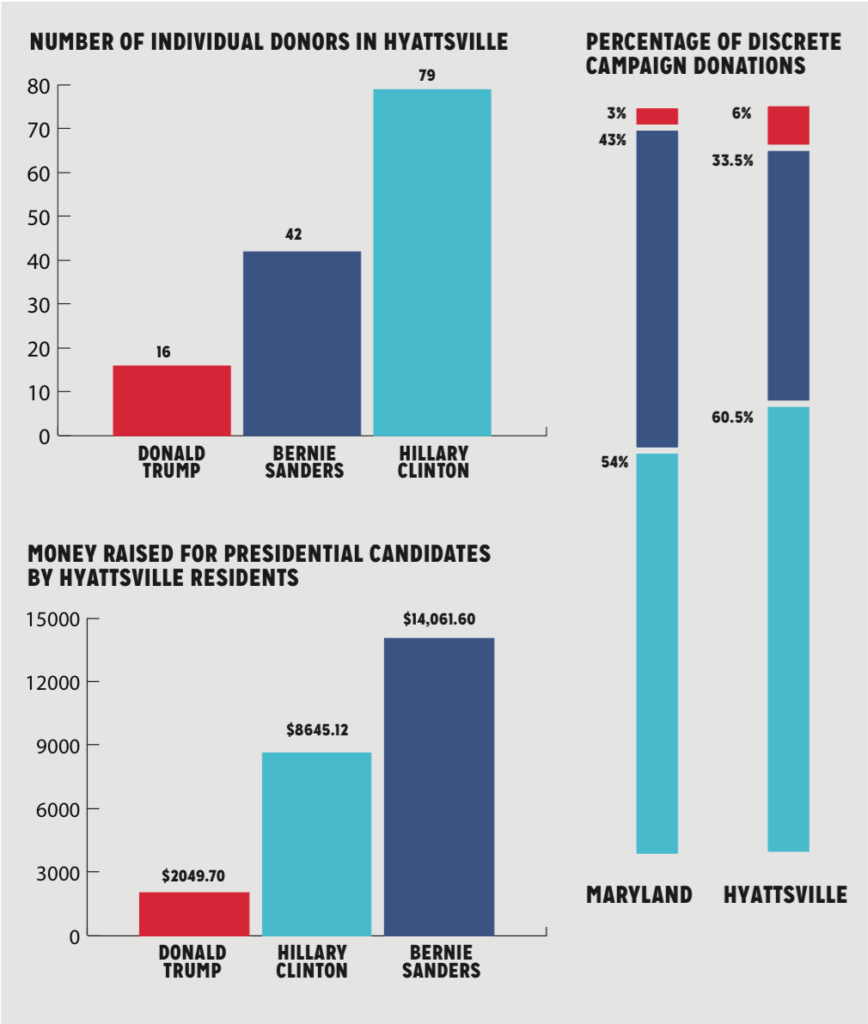 Sanders may have fewer people in Hyattsville contributing to his campaign than Clinton did, but his donors gave more on average.

The Republican nominee was the least preferred candidate, both in Hyattsville and in Maryland overall, but unlike in neighboring areas, such as Mount Rainier, Bladensburg and North Kenilworth, where Trump donations accounted for less than 1 percent, financial support existed for the candidate in Hyattsville.

“He tells it like it is,” said Betsy McCauley, 59, who is voting for Trump because she agrees with his policies concerning trade and the military.

“I think the country’s on the wrong path,” said Trump supporter Sam Adkins, “I think that if Donald Trump makes it, he’ll put his business sense to it, get some really smart people in his cabinet, and help turn this country around and make everybody believe in and love our country again.”

Hyattsville residents overall preferred Clinton, with nearly 61 percent of donations made to her campaign; 34 percent and 6 percent went to Sanders and Trump, respectively. But in Maryland residents were feeling the Bern. Sanders claimed almost half of all donations from city residents.

“I agree with him on basically every point,” said Martha Yager, a Sanders supporter, who then said she would be voting for Clinton since the Vermont senator had dropped out of the race.

“Hillary is just such a better candidate than Trump,” Yager said. “He’s destructive. She’ll be able to move things in a better direction.”

All in all, 137 Hyattsville residents donated almost $25,000 to this year’s presidential candidates, indicating that while the pen may be mightier than the sword in a democratic society, the credit card still carries weight in an election.

Miss Floribunda: Which tulip bulbs will bloom year after year?