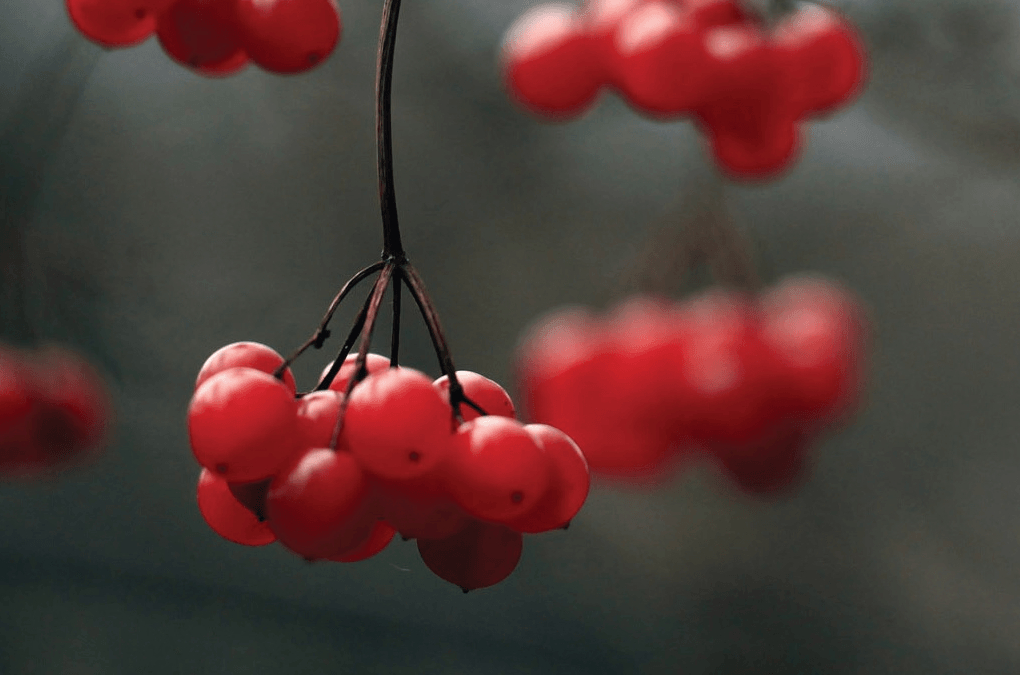 The American highbush cranberry produces luscious red berries in the fall that last throughout the winter.
Hyattsville

Because you said they harbor lyme ticks, I got rid of my bush honeysuckles, which had gorgeous red berries in December. I also yanked out the invasive porcelain berry you mentioned, too. Now I find that birds don’t visit my yard much. I’ve tried the obvious solution, installing bird feeders. The squirrels just love them, thank you very much. I want to plant something I can see from my windows that will attract birds again, and attract them in December. To me, birds and berries are an important part of the Yuletide scene and I always send out those Victorian-style Christmas cards that feature them. I’m considering planting holly, but as you have pointed out, it is unpleasantly prickly.  Please recommend something fast growing and ecologically acceptable.

Bereft of Berries on Buchanan Street

You will be happy to know that some of  our own native plants bear fruit in late autumn, enough to last till early spring. Some fill the bill perfectly — whether the bill of a cedar waxwing, a chickadee, or some other bird passing through or staying the winter. My own favorite is the American highbush cranberry (Viburnum trilobum). It gets up to 12 feet tall and wide but can be pruned back easily, and you can find lower growing varieties. This shrub grows fairly quickly, isn’t prickly like holly, and not only produces luscious red berries in fall that last through the winter, but blooms in spring with charming little hydrangea-like white flowers. The chokeberry (Aronia arbutifolia) is another good native-bird lure, as is the wahoo (Euonymus atropurpurea) and the dramatically attractive and nonpoisonous staghorn sumac (Rhus typhina). All have festive, red berries for your visual delight. As for holly, I only suggested kinder, gentler alternatives for indoor decorating. It is a wonderful bird harbor precisely because of the prickles. The birds are safe from competitors and predators while they feast on the berries. Some varieties are quite fast growing: the Nellie R. Stevens, a cross between Chinese holly and English holly, grows two to three feet a year. When it reaches the height you want, it accepts severe pruning forgivingly. It is also remarkable because it is parthenocarpic (self-fertile), and so you don’t need to buy both male and female plants.

If you decide to create a good winter birdscape, you might consider certain evergreens that not only have lovely silvery-blue berries and foliage, but are the favorite nesting places of such birds as the colorful and tuneful cardinal. If you have room for a tree that reaches 65 feet tall, you couldn’t do better than the beautiful eastern red cedar, but there are other smaller varieties of junipers adorned with beautiful berries. They not only feed the birds but offer them shelter from the winter winds. Don’t forget that junipers are dioecious, which means that  female junipers won’t set fruit if there isn’t a male juniper somewhere somewhere in the vicinity. There are many other wonderful choices, but I assume you want to limit this to the present season.

As an afterthought, have you considered investigating squirrel-proof bird feeders? There are “squirrel-buster” models of several types. One has a mechanism that the weight of the squirrel activates and which collapses whatever the squirrel is perched on it. Birds are able to perch on the thin ring surrounding the collapsible part. Some bird feeders are placed on tall poles that squirrels supposedly can’t climb. Another type has a globular shape that less athletic squirrels have trouble staying astride, and yet another gives the squirrel a nonlethal but unpleasant electric shock. And then my friend Ivan Grozni has a very good recipe for squirrel pie.

To meet Ivan and other members of the Hyattsville Horticultural Society please come to the December meeting and party at 10 a.m. on Saturday, Dec. 20. It will be hosted by by Jean and Millard Smith at 3600 Longfellow Street.

Islamic organization promotes charity and kindness throughout the DMV