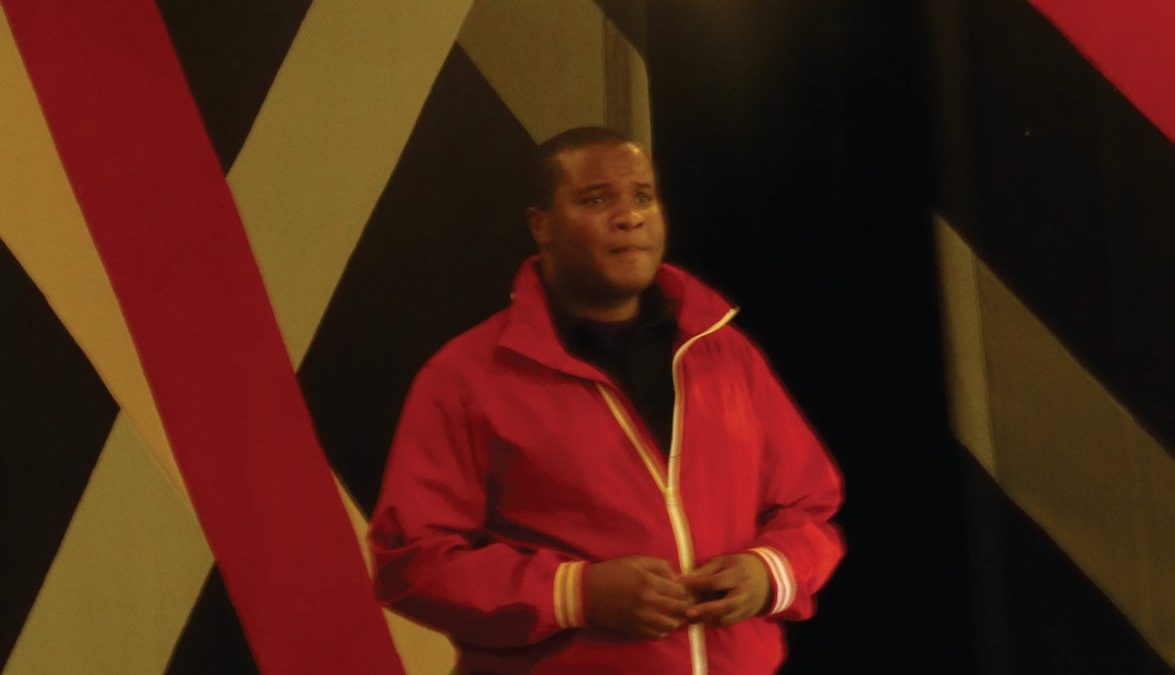 Lonnie Simmons, in the role of Eddie, ponders the implications of the
Hyattsville

BY ROSANNA LANDIS WEAVER — On December 1, over 130 area residents gathered in a church fellowship hall to eat together and watch a free play.  But the subject matter was an unusual one for a church basement, with conversations on condoms and  needle sharing in a play called “Secrets.”

Co-Chair Janis Sloane, described this year’s program as the most well attended and most successful, noting that “kids are much more engaged by action than by a speaker who drones on and on, throwing out statistics.”

Presented by Kaiser Permanente’s Educational Theater Program (ETP), the play featured a cast of five actors playing multiple roles in a series of intersecting scenes — centered around one individual — where stories were told of dangerous behaviors such as a house party hook-up that changes the life of the protagonist.

In her introduction to the play, Sloane, a longtime Hyattsville resident, noted two alarming statistics from the CDC: One in four new HIV infections occur in 18-24 year olds, and 60 percent  of youth infected are unaware they are infected.

It is towards this demographic that the play is geared.  Eddie is a high-school football star who realizes that past behaviors have put him at risk for an Sexually Transmitted Infection, and when tested finds out he is HIV-positive.  The characters exhibit a range of behaviors and responses, with an emphasis on positive decision-making and resisting peer pressure.

The play used the format of having a clinic call center to provide additional nuggets of factual information — for example, that teenagers don’t need parental consent to be tested.  The call center also serves as a means to identify and dismiss myths, often in a humorous manner.

But while laughter was part of the performance, the lasting images were the poignant moments, such as when Eddie cries, “I wish I could turn back the clock” as he shares the news with his grief-stricken father and with a new girlfriend.

The educational events form only a portion of the ministry’s work. In 2010, the group became a
certified Counseling, Testing and Referral site under the guidance and support of the Maryland Department of Health and Mental Hygiene. This designation allowed them to offer OraQuick HIV testing.

Five certified testers/counselors with the church, who have each attended a four-day training session at the AIDS Education and Training Center of the University of Maryland School of Medicine, have tested approximately 250 individuals.  For special events, including the Annual Health Fair the third Sunday of September, the church partners with Heart To Hand, Inc. to assist with the testing.

ETP  has been performing “Secrets” for 20 years. In a question-and-answer session after the performance, representatives explained that actors are required to be college-educated, with teaching as well as acting experience. In addition to Secrets, the group has several programs aimed at younger children on topics from nutrition to bullying, and typically performs in schools.
For more information, visit www.ETPmidatlantic.org.

First United Methodist offers free HIV screening the third Saturday of every month from 1 to 3 p.m. at the church, 6201 Belcrest Road.  The test is done by an oral swab from the gum line and confidential results are available in 20 minutes.