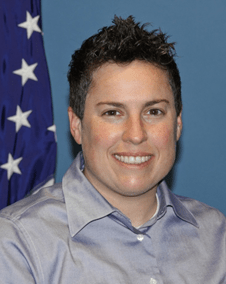 Inside a suburban Sheraton, surrounded by men in grey suits, a young woman in a black leather jacket asks the sharpest question of anyone there.

Here, at this convening of Montgomery County business leaders, Alec Ross, then running for governor, had his first encounter with Julie Verratti.

That first impression eventually led the author and innovator to select Verratti, an openly gay brewery co-founder, as his running mate for the 2018 Maryland gubernatorial elections. If elected, Verratti would have become the first openly gay lieutenant governor in U.S. history.

The pair lost to Ben Jealous in the Democratic primary for Governor of Maryland, who later was defeated by incumbent Larry Hogan.

Verratti is used to uncharted waters.

As co-founder of Denizens Brewing Co., along with her wife, Emily and brother-in-law Jeff, Verratti was instrumental in advocating for change to Montgomery County craft beer distribution laws.

More recently, the Silver Spring native was appointed by the Biden administration to serve as the associate administrator of field operations for the Small Business Administration.

Her role includes overseeing the roughly 700 employees at the SBA’s 68 field offices and 10 regional offices scattered across the country. She also helps implement programs and policies directly to small businesses that the SBA offers to help grow the economy.

She is the first woman to serve in this position.

Emily Bruno has known Verratti for 18 years, and the two have been married for 13 of those years. The two quickly hit things off while working for the DNC doing fundraising for the presidential election in 2004.

In fact, says Bruno, there isn’t anyone who doesn’t like Verratti.

“That’s not always the case for me,” Bruno said laughing. “She’s really affable and charismatic…I think it’s enabled her to be a gay woman in spaces that haven’t necessarily been super open to gay women because she breaks through that for people.”

Bruno credits Verratti’s open-heartedness for her ability to break barriers.

Shortly after President Biden’s election, Bruno recalled someone from his transition team reaching out to them about the opportunity to work at the SBA.

Initially, they had asked both of us to put our hats in, Bruno said.

It took a few months for the process to play out, during which both talked about the impact it would have on Denizens. Fortunately, Bruno said, they figured things out so that Verratti could step away from Denizens to focus on this role in the SBA.

“Over time, as events come back and there is more opportunity to be out in the world, I think we will be feeling the absence of Julie a little bit more,” Bruno said.

Bruno felt Verratti was uniquely placed at the SBA to make an impact, at a time when small businesses like Denizens have been through a tough year because of the COVID-19 pandemic.

She is perfect for this position and combines interpersonal skills and knowledge owning a business, Bruno said.

“That’s the type of person who should go out and represent the new policies of this administration to small businesses out there. Refreshingly be someone on the Democratic side who actually understands how small businesses work because I don’t think a lot of people do,” said Bruno.

Opening Denizens has helped Verratti understand the law and regulations, and find creative ways to knock down barriers to help small businesses grow.

“She has always understood that small business leaders are too often overlooked,” said Ross, who has had the most fun with Verratti visiting and hearing the perspectives and exchange of ideas with small business owners.

Before opening Denizens in 2014, Verratti and her partners found themselves up against laws in Montgomery County restricting self-distribution of brewery beer to bars, restaurants and liquor stores that would then sell their beer to consumers.

“We were contemplating a business model that literally hadn’t existed in Montgomery County,” Verratti said.

She took action, seeking out lawmakers, making a case to committees of jurisdiction at the state and local levels for why their business made sense and why these laws needed to change.

Without this change in the law, Verratti believes Denizens would not have been able to succeed.

“Small businesses are the giants of our economy and we need to treat them accordingly, not just through our words but through our programs and our policies,” Verratti said.

Ross said he thinks Verratti is someone who needs to be in government and political processes because she understands that the soul of American business is small and medium enterprises.

Verratti brings that soul into the SBA and plans to focus on bringing empathy back to the government and government to the people.