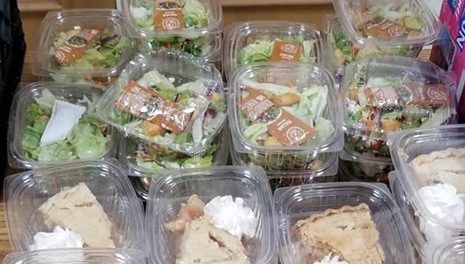 By HEATHER WRIGHT — What happens when you want to age in place in your own home but getting food for yourself is a struggle? For millions of seniors across the U.S., Meals on Wheels America programs come to the rescue by delivering food. But that’s not all Meals on Wheels delivers.

According to Meals on Wheels America’s website, one in four seniors lives alone, and 5.5 million seniors are food insecure.

In 2017, as part of the Hyattsville Senior Nutrition Program Partnership, the city partnered with Meals on Wheels College Park (MOWCP) to provide meals to qualifying senior residents of Hyattsville who are food insecure. MOWCP has been in operation since 1974 and provides weekday meals to seniors in the northern Prince George’s County area. (Hyattsville used to host its own Meals on Wheels program, operated out of First United Methodist Church of Hyattsville, but the program shut down a little over five years ago.)

As a MOWCP partner, the city pays $15 for delivery three times a week for participating Hyattsville residents, according to Senior Services Coordinator Beryl Johnson. Each delivery consists of three meals: one hot and two cold.

Johnson said that 10 Hyattsville residents are currently qualified MOWCP participants and are supported by the city. Lisa Ealley, chairman and treasurer of the MOWCP board, noted that about 10 additional Hyattsville residents self-pay for MOWCP services. (Residents who self-pay do not need to meet the stricter eligibility guidelines required for city-sponsored participation.)

According to MOWCP Volunteer Coordinator Danielle Carter, MOWCP currently has nine delivery routes that serve between 80 to 90 clients, total. Two of these routes deliver to Hyattsville residents.

According to Eally, MOWCP employs only two staff: part-time head cook Kathy Selzer, who also acts as the intake coordinator, and a part-time volunteer coordinator. Volunteers do the rest of the work, including sealing meals in trays, making sandwiches, preparing condiments, packing the meals into vehicles and delivering them.

MOWCP needs more drivers, according to both Ealley and Carter. Drivers typically deliver meals one day a week, one to four times a month, between 10:30 a.m. and 1:30 p.m. on weekdays.

Most of the program volunteers are seniors, themselves, and the oldest driver is 91 years old. Carter noted, too, that more younger people are becoming drivers, and that many of these drivers also work from home or are stay-at-home parents.

“We have a handful of GenXers, a college student from [University of Maryland], and we just got a driver who is fresh out of high school. She said she wanted very much to find a way to give back to her community and felt that Meals on Wheels was the way for her to go,” said Carter.

Carter concurred, describing how in previous jobs as a paramedic and an emergency medical technician, she saw seniors who didn’t seem to need 911 services but called because they were lonely and were seeking company and attention. “They want someone to come talk to them,” she said.

Meals on Wheels, then, delivers nutrition to seniors but also helps mitigate their loneliness and feelings of isolation.

Pamela “Pam” Brown is a 72-year-old resident of Hyattsville who has been a MOWCP driver for about six months. She said she currently delivers meals to residents of Green Ridge House in Greenbelt.

“They’re just so incredibly appreciative of, number one, getting the meals but, number two, getting a visit from someone and hearing, ‘Hi, how are you?’ and ‘How’s your day going?’” said Brown. “It’s not rocket science. It just takes a willingness to be empathetic and think, ‘There but for the grace of God.’”

“My favorite part [of working with MOWCP] is … the breaking of the social isolation that plagues, and I use that word strongly, that plagues our senior members of society,” emphasized Carter. “People forget about them because they’re so busy in their lives everyday.”

She added, “And one day, that could be you.”

If you are interested in volunteering with MOWCP, contact Danielle Carter at dscarter86@yahoo.com or at 336.473.8525. If you are a senior Hyattsville resident who needs MOWCP services, contact MOWCP at 301.474.1002 or Senior Services Coordinator Beryl Johnson at bjohnson@hyattsville.org or 301.985.5058.

Getting to know Hayden Renaghan