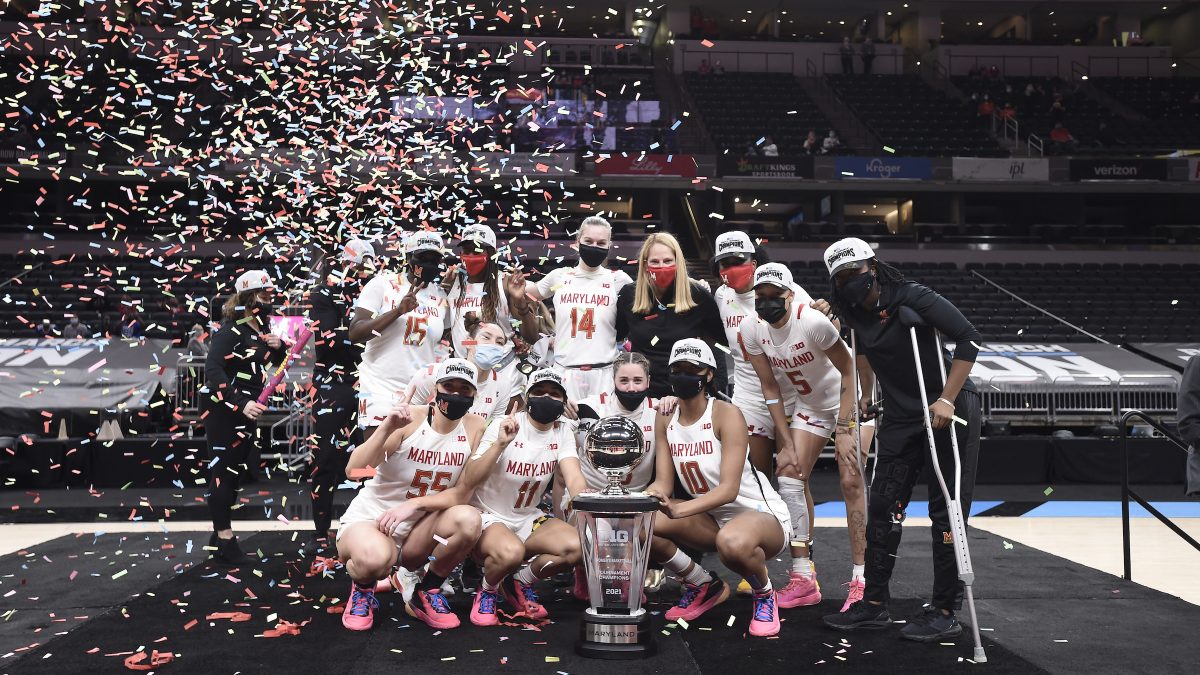 Playing during a pandemic has been unfamiliar territory for the University of Maryland women’s basketball team. But one thing was the same: The Terrapins had another terrific season.

Maryland finished 26-3, won its fifth Big 10 Tournament in the past seven years and advanced to its 10th straight NCAA Tournament.

Terrapin players, coaches and staff had to undergo daily antigen testing throughout the season. They played in front of few or no fans and had limited contact with people outside the team. They were, in essence, living in a bubble. When on the road in a normal year, they would typically eat team meals together, but they primarily ate in their individual rooms, instead.

“It will be a season that I’ll always remember,” said Frese, who led the Terps to the 2006 national championship. “Specifically with these student-athletes, the sacrifices, the commitment level, the discipline that they’ve had to have. Being tested six days a week, staying in their bubble all season long within their own team, just for us to have a season.

“It’s a special team that I’m always going to remember.”

The Terrapins ended the season No. 1 in the nation in points per game (90.8 ppg) and assist/turnover ratio (1.69). They scored 100+ points seven times. They were second nationally in 3-point field goal percentage (39.97). Katie Benzan made 50% of her 3-point attempts to lead the country.

Owusu and Benzan were among six players to average in double figures. Diamond Miller led the scoring parade at a 17.9 clip. She was named Most Outstanding Player of the Big 10 Tournament. Chloe Bibby averaged 13.2 points. Mimi Collins chipped in 10.6 ppg and a team-high 6.2 rpg. Angel Reese (10 ppg) rounded out the top six.

Maryland captured the conference regular season title with a 17-1 record. It won each of its three league tournament games by double figures, including 104-84 over Iowa for the championship. ESPN, The Athletic and the AP named Frese National Coach of the Year.

Frese explained how she tried to make this most unusual of seasons seem normal.

“We really spent a lot of time with our team,” Frese said. “Just any time we could be together, whether it be a practice or the next game, just valuing the fact that we got another opportunity to play.”

Frese, who won her 50oth game at Maryland, 95-73 at Nebraska, said practice was her team’s escape.

“I can’t say enough about these student-athletes,” she said. “The practice court is where they love to be. They would spend hours upon hours being on the court. It was kind of that oasis, to be quite honest, away from their Zooms and their classes and in the apartments that they really spent a ton of time. They just loved being in [the] Xfinity [Center].”

The Terps enjoyed two long winning streaks, one of 10 games and one of 15. They won twice in the NCAA Tournament to get to the Sweet 16 before falling to Texas, 64-61. All this from a club that entered the campaign with no returning starters.

Frese thinks the team’s overall inexperience in the NCAA playoffs might have played a role in the loss to Texas. (Last year’s tournament was canceled due to the coronavirus.)

“This is the first time for many of our kids,” she said. “When you look at our sophomore class [it was] going through the NCAA Tournament for the first time. All of this is just going to make us better.”

Despite not advancing further in the playoffs, Frese said she “couldn’t be more proud of this team. Obviously, only one team gets to win the [national championship]. We had really high goals, and rightly so. This team was so talented, but tonight we weren’t the better team for 40 minutes.

“That doesn’t diminish anything that [we] did all season long. They were a joy to coach. I can’t say enough, to be in a pandemic. There’s not another team that I would rather be able to coach throughout.”

Election Board preps for changes after noncitizen voting passes