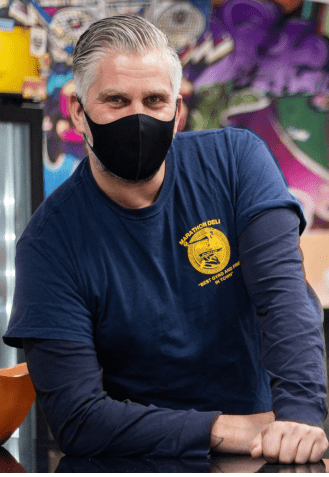 Marathon Deli has been the go-to for hungry students since it opened in 1972. Now the beloved Greek restaurant has a new location, right on Baltimore Avenue, and continues to serve the community during the COVID-19 pandemic.

Marathon was forced to move when developers announced that they would be building student housing in the shopping center that housed the restaurant, which was eager to stay in College Park. Marathon worked with the Terrapin Development Company to find a new location.

“We wanted to stay in the College Park area closer to the university, because most of our customers are students,” said Maria Koumpouras, owner of Marathon Deli. “The University of Maryland helped us with finding a new location. We thank them for that, because they helped us a lot. We’re just in a better and bigger location, more seating is available when the coronavirus is no longer.”

Terrapin Development Company offered other businesses in the shopping center assistance, too, according to Katie Gerbes, a development manager with the company.

“We offered each of our tenants within that shopping center a few different options as they vacated – some will take a temporary leave of absence and open back up in the new project when it is complete, some (like Marathon) asked for help relocating to a new location, and others have taken this opportunity to retire or explore other career options. Marathon Deli expressed their desire to stay open, and as a result, we worked to find them their new location,” she wrote in an email.

While Marathon’s new location was announced earlier in 2020, their grand opening was in October, when fewer students were on campus, due to the pandemic.

“The university is closed and students weren’t here for a while, but thankfully we’ve been doing okay. We had a lot of people who were not coming into the restaurant, but we’re doing a lot of Uber Eats and deliveries to the students, so it’s getting better,” said Koumpouras.

In addition to opening a new location during the pandemic, Marathon also joined Route One Communities Care, a coalition along the Route 1 Corridor that helps fight food insecurity in the community.

“Once a restaurant enters the program, we buy meals from them once or twice per month ($10 per meal, usually around 100 meals at a time) and staff and volunteers transport the food to different distribution sites,” said Bronte Nevins, who works with the Central Kenilworth Avenue Revitalization Community Development Corporation (CKAR CDC), a nonprofit partner of Route One Communities Care.

According to Koumpouras, once CKAR CDC staff approached Marathon about the program, they knew they wanted to participate.

“They came and talked to us about it and it was something that we were interested in doing. We would like to help out people that cannot really afford [food], or [are] in a tight spot. We [participate] about once a month,” she said.

Overall, Route One Communities Care serves an average of around 450 meals per week, according to Nevins. The food is then distributed at different locations in Riverdale Park, College Park, University Park and Hyattsville. The organization strives to distribute meals based on the area’s needs.

“Many of [Marathon Deli’s] meals have been brought to Parkview Gardens, where there is a large population of refugees. The meals have been very enthusiastically accepted there. One benefit of our program is that we are able to bring culturally sensitive meals to distributions, such as vegetarian meals, halal meals, and meals that are familiar to the people we are serving,” said Nevins.

Even though the new Marathon may look a little different, Koumpouras said that they still serve their familiar Greek food to an appreciative community.

Steven Ioannidis, a junior at the university, agrees with Koumpouras.

“As someone with family from Greece and who has been there multiple times, I’d definitely say Marathon has one of the most authentic gyros I’ve ever had in the U.S.,” he said. “It’s a place where I feel like I can take my friends and show off the thing I love most about my cultural background — the food.”

The Hall CP becomes a must-visit destination during pandemic