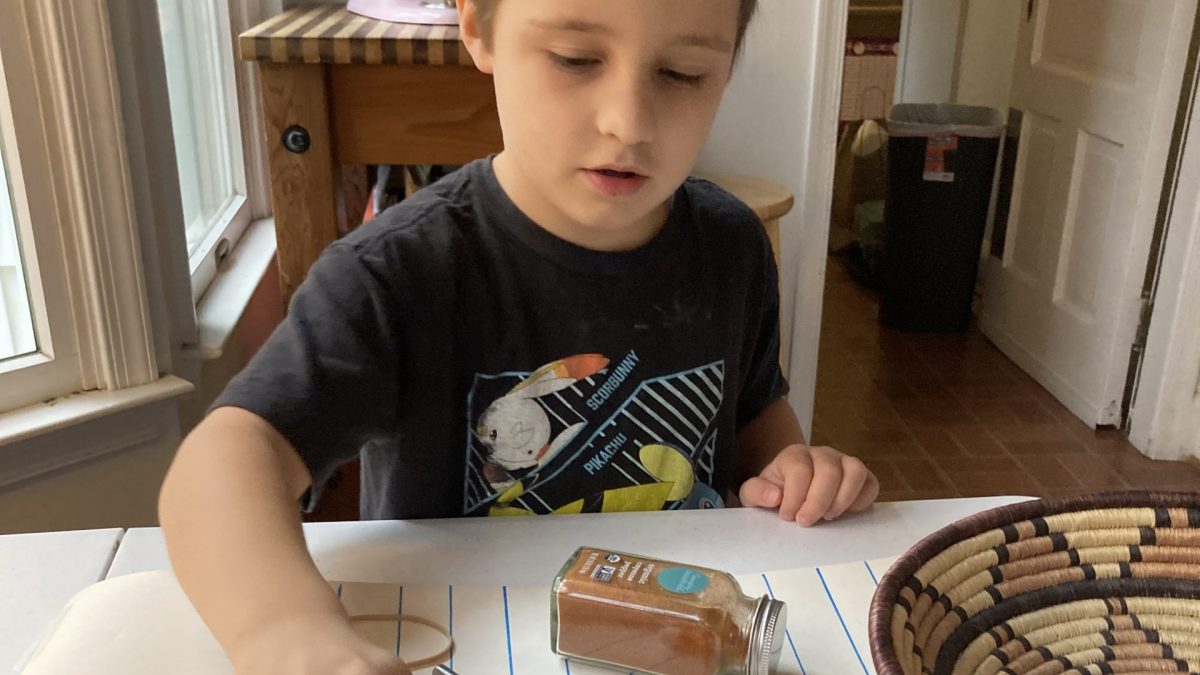 Chua’s son, William, now 7, was enrolled in a Montessori school last year, which they loved. Following the mid-March shutdown, the school transitioned to virtual classes. Chua explained in an email that “because his schooling … [had been] very hands-on, with a lot of manipulatives and real-life ‘work,’ and not as academically focused, … [going virtual] was not a very fun experience for him.”

Emily McNally’s son, Ciaran, is a 5-year-old kindergartener who started at University Park Elementary School last fall. “His teachers were wonderful and were doing the absolute best they could under really difficult circumstances, but we found that virtual school was not a good fit for our son or our family,” said McNally in an email.

Since last year’s closures, almost everyone in the area with school-aged children has been helping school their children from home, at least part-time. Prince George’s County Public Schools (PGCPS) remain fully virtual as of press time. Some local private and parochial schools have transitioned to a hybrid model, which incorporates both distance and in-person classes.

The American Association of Pediatricians (AAP) recommends that children between the ages of 2 and 5 use screens for no more than 1 hour per day. Current guidelines for school-aged children are more flexible, with the AAP emphasizing that children and teenagers need adequate sleep, physical activity, and time away from media. Overall, those who seem to struggle most with hours upon hours of virtual schooling are younger children, who usually have more limited attention spans and a greater need for hands-on activities. English-language learners and students with learning disabilities also struggle more with virtual schooling.

While Maryland officials have called on schools to reopen for hybrid in-person learning by March 1, a Jan. 28 PGCPS press release says that they are continuing to assess options for resuming in-person learning this spring and would provide an update in mid-February.

“During the virtual classes, Ciaran was at best unfocused and at worst having a meltdown,” McNally said. “We often had to bribe him to do the classes or had to pull him away from an activity he enjoyed, like reading a book or playing with his brother, to sit down in front of a screen.” She added, “It was hard to watch a kid who was previously interested in learning and generally even-tempered become frustrated, bored, and moody after a day in front of a screen.”

Some older children in the area are frustrated with online learning, too. Peter Witte, a University Park resident, described how both of his children, a 10-year-old fourth-grader and an 8-year-old third-grader, struggled with distance learning during the end of the 2019-20 school year. “Nearly all of this had to do with the remote, technological changes to their learning experience. They felt alienated from their education,” he explained in an email. “During this experience, we [Witte and his wife] also had to keep them on task or encourage them to stay engaged … . This was new. They had loved learning in the past, during ordinary in-person schooling.”

A PGCPS spokesperson noted that approximately 132,000 students were enrolled for the 2020-21 school year, down from about 136,000 last year. The decrease reportedly reflected students opting to homeschool, delaying entering school (from preschool or kindergarten) or transferring to private schools.

Approximately 3% of U.S. students, ages 5-17, were homeschooled in 2016, a percentage that has been fairly consistent since about 2007, according to the National Center for Education Statistics. According to the Maryland Department of Education, 3,177 students were homeschooled in Prince George’s County during the 2019-20 school year, which was confirmed by a PGCPS representative. Data for the 2020-21 school year was not currently available but would be updated on a rolling basis, according to PGCPS.

Witte said that although homeschooling has gone well, he and his wife plan to send their children back to school after the pandemic. “Our kids would like a schooling experience that is more social,” he noted, adding that he and his wife both had demanding, full-time jobs.

McNally also plans on sending her son back to school after the pandemic. She said that although there are plenty of ways for homeschooled children to connect with others, “I feel the social aspects of in-person school are so important.” She also plans to return to in-person work, herself, which would rule out homeschooling. McNally emphasized, “I’ve really loved this time learning along with them.”

Chua and her husband think that they will continue homeschooling after the pandemic resolves. “The pandemic accelerated the process, but our original motivation still remains,” she said. “In fact, we’re about ready to add our daughter, Alexandra, to the mix! It will be different because she’s just three, but we’ve gained confidence with the experience.”

Hyattsville Life and Times, 4 years ago 2 min read
Beyond Hyattsville

Community Forklift wins small business award from eBay, thanks to its mission and its fans