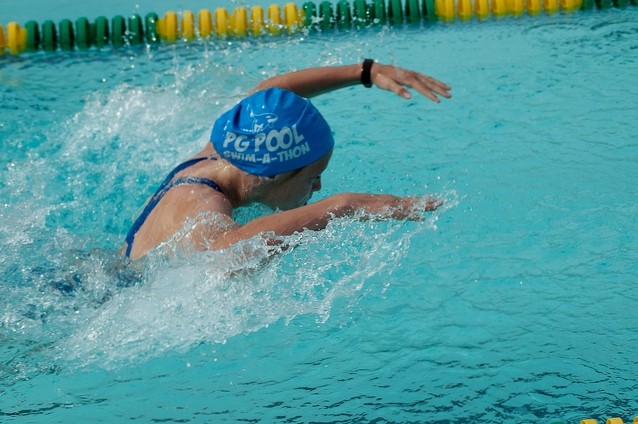 Among the many attractions of Prince George's Pool is the Killer Whales swim team. Photo courtesy Charles Steck. (2013)
Beyond Hyattsville

BY ROSANNA LANDIS WEAVER — Mention the Prince George’s Pool (commonly known as the PG Pool)  to some locals and the superlatives fly.  Tamara Embrey says,  “I couldn’t love it more than I do.”

“We plan our summer around it,” says Rebecca Gitter.

The pool, located on Buchanan Street in Mount Rainier, counts 113 Hyattsville families among its members. But many more have been shut out since a membership cap was imposed during the summer of 2011. The next season, the few open slots sold out in six minutes.

As of August 1, there were 820 names on the waiting list for individual or family memberships. With a current turnover rate of 7 percent, it would take 15 years to move through the list.

After years in the red, Prince George’s Pool now has more people on the waiting list than on the membership roster.

How is that possible, when as recently as 2004 the pool’s financial situation cast doubts on its very survival? The maintenance, management and insurance expenses associated with neighborhood pools has forced others in the area to close, including University Hills Pool.

PG Pool members have several explanations for the population explosion: an influx of young families to surrounding neighborhoods; rising fees for locals to swim at D.C. hotels; the increasing appeal for staycations as the economy soured. Wijesinghe, who served on the board from 2000 to 2006, notes that the pool has plenty going on on its grounds (sandboxes, play equipment, volleyball, ping pong, foosball) for children who are not natural fish.

“I have two very different kids,” notes Wijesinghe. “One of whom hasn’t set foot in the pool all year, but goes every day.”

The phrase that comes up again and again in a discussion of what distinguishes the pool is the sense of community found there.

“When I came to Maryland in 2007, I didn’t know a single soul,” said Embrey. When she came to the pool, “I immediately felt at home and my life changed.”

The family-like atmosphere is something that older members can recall from the pool’s early years. Irena De Carlantonio, who joined in the late 1960s, fondly remembers the crab feasts members shared. Her reflection on the pool’s history is a reflection on her own, “There was a time I could do 22 laps,” she notes. “Now when I go to the pool I sit in the shade.”

Peggy Dee, another longtime member, recalls the time when “there were so many families from St. Jerome’s that we called the place where they sat ‘Catholic Row.’”  But, she adds, “a lot of people stopped coming when their kids grew up.”

Joe and Pam Bellino, whose seven children all participated on swim team over the 30 years they were members, urged members of their Hyattsville babysitting co-op to join and then families affiliated with Christian Family Montessori School, as well as introducing the co-operative work structure that helped save the pool money and increased member participation.

The Bellinos also worked to foster ethnic and cultural diversity there. Prince George’s Pool opened in 1956, and like many of that era was founded, at least in part, as a private alternative to integrated public pools. The charter created a structure of lifetime membership, with a requirement that to become a member one had to have a sponsor and be vouched for by then-current members.

But the sponsorship structure began to create a sense of exclusion, especially since D.C. residents were prohibited from joining. The Bellinos recall that the ban was, for part of the old-guard membership, explicitly intended to keep the membership largely white.

Eventually a new charter, changed in part under pressure from the NAACP, removed the sponsorship requirement and the ban on members outside Prince George’s County, and allowed in members from D.C. This made increasing membership easier at a time when it was sorely needed, as people from Brookland began to join immediately.

“Economics has a way sometimes of changing policy,” says State Delegate Doyle Niemann (D-47), who served on the pool board from 1983 to 1997. “By the time I joined in 1980, the focus was on what we can do to keep it open. There were not enough members to support the pool ”

The physical structure of the pool was becoming increasingly run down. The gutters were collapsing and the pool was leaking large amounts of water. To pay for some repairs, Niemann and other board members secured a loan and sold an unused lot next to the pool to M-NCPPC.

At around that time the board had paid off its 1980s loan, and recognized the need for some major work. The plan was for work to be completed off-season, before the pool opened in 2004, but construction delays prevented the pool from opening until July 19.

That year there were only 134 members, and even that number largely because families were required to maintain membership to be part of swim team. The swim team practiced at Trinity and other locations, and held many “land practices.”  Nearly half of the members asked for a partial refund when the season was over.

The pool stayed open until the end of September, holding the first of its annual “Oktoberfest” and the following year the pool upped its communication and outreach, with advertisements, open houses, “countdown to splashdown,” and  co-op credit for referring members.  Board member Ken Carter introduced the practice of having live bands play regularly, which drew in additional guests and spread the word of mouth.  Current board member David McCandlish notes that that year’s upgrades to the facilities were also a draw.

Wijesinghe said that in the following years, there were approximately 160 members, then 200, then 300 – and then the growth became exponential.  In June 2011, at their first meeting of the year, the members called for a cap. So the number was frozen at the then-current level: 675 memberships, representing approximately 2,400 people.

The new memberships allowed for improvements, including expanded hours, a slide, and more grills on the property. Yet longtime members are wistful about the time when it seemed like all the members were from Hyattsville and Mount Rainier. “I liked it better when we were in the red,” jokes Hyattsville’s Judy Kendall. “My favorite thing was green space with just a few picnic tables, and I just saw the green space getting eaten up.”

Whatever the factors behind the exponential growth, dealing with the growth became something of a challenge. The cap created a sense of scarcity.  Now, according to Membership Director Tanya Renne, instead of approximately 30 percent turnover each year, turnover is down to seven percent.

Renne is hopeful that the waiting list will decrease, in part as swimmers discover other nearby pools, including the Adelphi Pool on Riggs Road, less than five miles from Hyattsville.

Dawn Nichols, a Hyattsville resident since 2006, joined Adelphi Pool in 2008, for the shady toddler pool and the friendly faces she found there.  As her children have grown, she’s come to appreciate “the vintage metal slide that has become a rite of passage when young swimmers pass their swimming test.”

The Adelphi pool is in a different phase in its demographic trajectory, and is actively seeking members. The number of Hyattsville memberships alone has climbed to 50 at last count.

Hugh's News: The other Florida shooting

Hyattsville Life and Times, 4 years ago 3 min read
Beyond Hyattsville