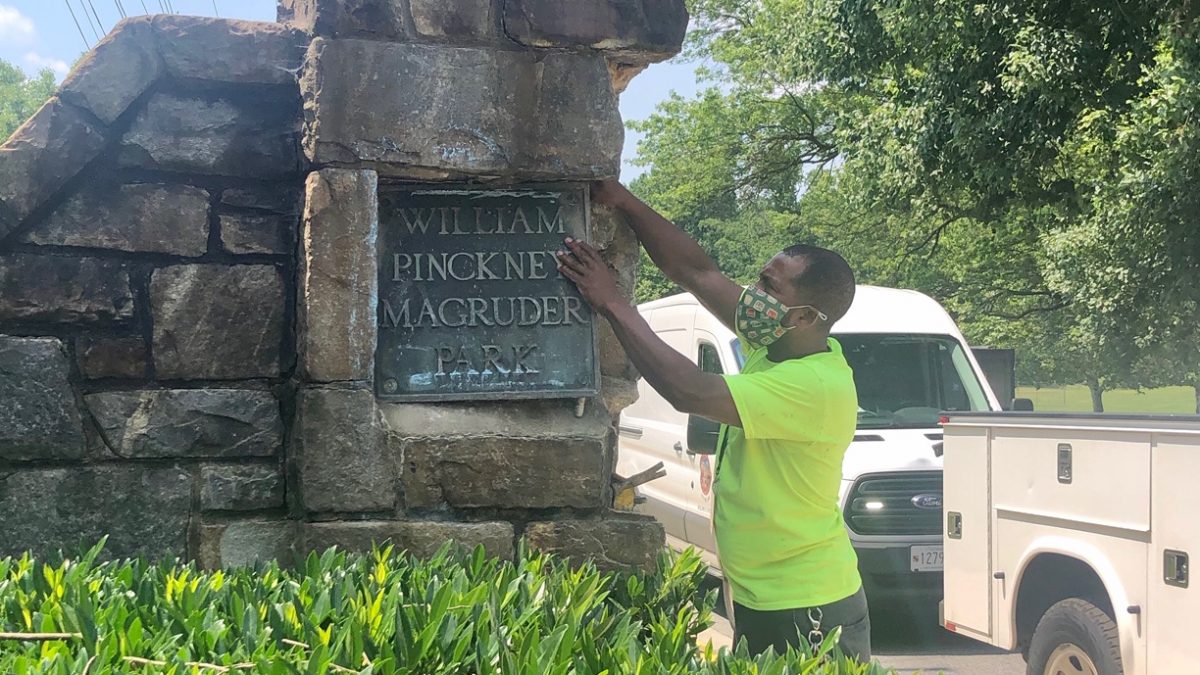 Hyattsville’s Department of Public Works staff removed the park’s name plaques after they were vandalized last summer. Photo credit: Courtesy of the City of Hyattsville
Hyattsville

Magruder Park to be renamed for David Driskell

By Sophie Oriani and Kit Slack

At their May 3 meeting, the Hyattsville City Council voted 9-1 in favor of renaming William Pinkney Magruder Park. The park will soon be named David C. Driskell Community Park.

Driskell was an artist, curator and scholar of African American art. He lived in Hyattsville from 1976 until his death on April 1, 2020. Driskell died of complications of COVID-19. He was 88.

Driskell’s grandson, David Errick Driskell, represented the family in a virtual public hearing about the renaming on April 5. He spoke of his grandfather’s love for the City of Hyattsville and its people, and said that his grandfather was an example of the hard work and determination that characterizes Hyattsville’s residents.

The University of Maryland (UMD) held an event, on Feb. 12, to honor Driskell’s 22-year affiliation with the university’s art department. Former students spoke about the influence he had on their lives. “I feel that he awakened me to the power of words and images,” said Preston Sampson, a 1984 UMD graduate who is now a painter.

“To this day, it’s not easy to look out in the world and find a Black male mentor. Driskell resembled the kind of person I could look to or attempt to be in his composure, in his scholarship and his kindness. To have someone like him in the art world is immeasurable,” added Shaun Leonardo, a multi-disciplinary artist.

Councilmember Bart Lawrence (Ward 1) voted against the motion, noting that he was hesitant to name the park after any individual. He said that his vote was “certainly not a vote against David C. Driskell.” Lawrence had supported naming the park after the Nacotchtank, Indigenous peoples who once lived in this region of the Anacostia watershed.

Councilmember Erica Spell Wolf (Ward 5) spoke in support of honoring Driskell, whom she called an “extraordinary” person. “In the grand scheme of the impact of Driskell’s work, this is very small,” she said, “but I am so proud to be a part of it.”

The council’s decision to rename the park followed three years of discussion and deliberation.  A February 2018 column in the Hyattsville Life & Times noted the presence of a racially restrictive covenant in the 1927 deed through which William Pinkney Magruder gave land for the park to the city.

Magruder was a major landowner and local real estate developer. He was also a politician and a philanthropist, and served as mayor of Hyattsville from 1909 to 1911.

The parkland that Magruder donated to Hyattsville lies just across the river from North Brentwood. North Brentwood, the first African American suburb of Washington, D.C., was incorporated in 1924, three years before Magruder gifted the land to the city. Black families had settled there beginning in 1887, one year after Hyattsville’s 1886 incorporation.

The 1927 deed by which Magruder gave the park to the city stipulated that the park was for the use of white inhabitants only, and that only white nonresidents could apply for a permit to use the park. At the time, sports, schools and housing were all segregated.

In March 2019, Councilmember Joseph Solomon (Ward 5) introduced a motion to explore the legal feasibility of removing the covenant and also of renaming the park.

The City of Hyattsville solicited suggestions for a new name from residents. There were over 800 suggestions, including naming the park after former Mayor Candace Hollingsworth, choosing a symbolic name like Unity Park, and even joke suggestions like Parky McParkface. Some residents preferred to keep the name Magruder.

Hyattsville’s Race and Equity Task Force and Health, Wellness, and Recreation Advisory Committee teamed up to sort through all the suggestions. They came up with a short list of possible names, including David C. Driskell Park and Nacotchtank Park, discussed at several city council meetings and a public hearing this spring.

The formal resolution to rename the park is expected to be officially passed at the May 17 meeting of the city council.

Maristela Romero, an intern with the Hyattsville Life & Times, contributed to this article.

‘I don’t see it as a negative thing’: Councilmembers decline to seek reelection