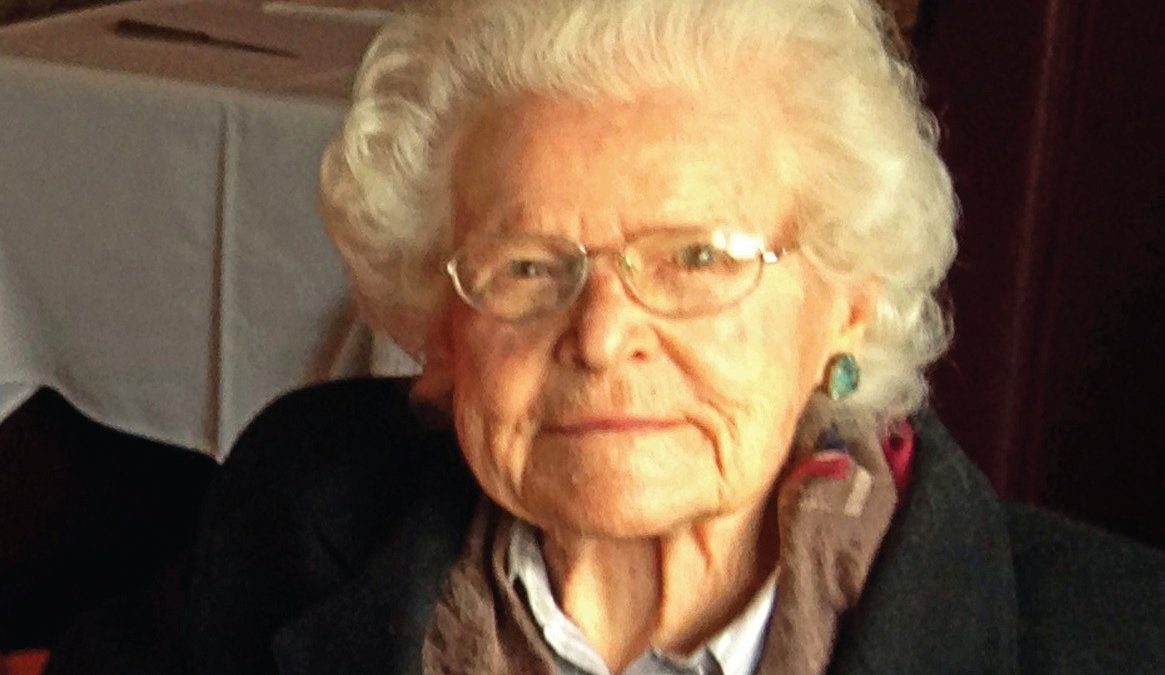 The following is an excerpt from a March 17, 2014, interview with Elizabeth Louise DeMarr Tatspaugh, who still lives in the same Hyattsville house she and her husband, Walter Ludlow Tatspaugh, bought in 1937. Both come from longtime Maryland families – Mrs. Tatspaugh grew up in Berwyn Heights and Mount Rainier, and Mr. Tatspaugh grew up in Laurel. They raised five children in their Hamilton Street house. Mr. Tatspaugh worked as an electrician for PEPCO until his death in 1963. Katy June-Friesen edited the interview text for length and clarity.

My husband was out working in the neighborhood [in the late 1930s], he worked for PEPCO. And he saw a sign, “House for Sale,” and he knew the name of the man whose name was on [the sign], so he hunted him up and the fellow brought him around right away and showed him the house and . . .  just like that, [we] bought a house. It was white like some of the little bungalows up the hill. We have been in this house ever since we came. So I oughta know a lot about Hyattsville.

There was no big [WSSC] building across the street. There were several houses on that side, above where the upper end of the building would be. Across the street was a lovely place for the kids to sleigh ride on the hill when it snowed. There was always a park there. There was a Washington Suburban Sanitary Commission building over there, way back on what that lot is now. But it was just a very, very small building. . . . Then as the area started developing, we needed more of everything, and [the new building] was something we needed. A lot of people worked there a long time. I worked there for a while too. You’d walk across the street and go over there to work, come home to lunch and go back again.

And actually, the town in this direction [toward West Hyattsville] – that was all farmland. It was farmland, or [people] had big gardens. They raised lots of vegetables. Local people did a lot of that then. They didn’t have to go to the store for very much.

And if you’d go up here on U.S. 1, I used to walk up to the grocery store, which was up at 42nd. If you bought more than you could get home with you . . . you could sit your groceries on the counter, in front of the big glass window. And then daddy who had the car would stop by on the way home and pick up the groceries.

There was another nice place, we all called it Pete George’s. The man’s name was Pete George, I think he was from Baltimore. Anyway, he made the best candy. All kinds of candy. And around holiday times like Christmas and Easter, he even made some of them in pretty shapes. And once when my husband was up there some years later and this man asked him if he would fix such-and-such a thing, he said, “How much do I owe you?” and [my husband] says, “Well, you don’t owe me anything. But if you ever decide to get rid of that copper kettle” – that’s what he made his chocolate in – “I’d like to have it.” The copper kettle’s over there in front of [my] fireplace. . . . You couldn’t buy any liquor any place in Hyattsville. It was set up as a dry town. But you could get Coca-Colas, and you could go in [to Pete George’s, officially called Hyattsville Candy Kitchen] and sit down and drink a Coca-Cola.

This was Owens Avenue. In [Washington], the streets are all more or less alphabetical. Out here, somebody in park and planning [changed them], and now this is Hamilton, and we have Jefferson, Madison and so on. Copied from the original way the [Washington] city streets were done. Suppose somebody gave you an address on Owens Avenue while on Rittenhouse Street. This way, with them alphabetical, you can find your way around town.

I like [this house] very much. Even though I’m here by myself a great deal of the time. It’s home. I don’t want to live anyplace else. I enjoy traveling and coming back, but this is home. The house, and the neighborhood. If I had to get up and go someplace right now, I wouldn’t know which way to turn. So I’ll stay right here. You’ll have to carry me out.

The Hyattsville Voices Oral History Project was recently started by resident Katy June-Friesen to collect stories about our city’s history and the lives of people who live and work here. HL&T will feature edited excerpts of these interviews. You can contact Katy to suggest an interview at k.junefriesen@yahoo.com.