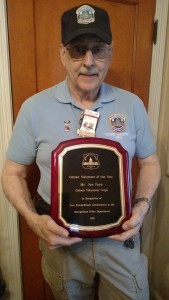 BY REBECCA BENNETT — Queensbury Road resident Jon Faye was named the Citizen Volunteer Corps Member of the Year by the Metropolitan Police Department (MPD).  He was presented with a plaque at an awards ceremony on March 3 at Gallaudet University.

Faye said he worked more than 1100 unpaid volunteer hours in 2015 alone.  He has been assigned to the Financial and Cyber Crimes Unit for several years, according to MPD.

MPD said his work allows the detectives more time to handle their caseloads. “Mr. Faye is not only instrumental in the day-to-day operations of the Financial and Cyber Crimes Unit, but is also heavily relied upon by detectives and the supervisors on his expertise on identity theft and fraud,” the awards program said.