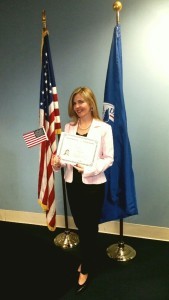 BY HELEN LYONS — For many Americans, this Fourth of July will mean hotdogs and hamburgers on the grill, a picnic with friends and family, and fireworks exploding in air. For Rosalina Justiniano, however, it will mean something more.

On July 4, Justiniano celebrated her first Independence Day as an American citizen.

Born in Santa Cruz de la Sierra, Bolivia, Justiniano was naturalized in a ceremony on May 7 during the city’s Citizenship Celebration Day. As a part of the special day those who qualified could officially become citizens of the United States.  Justiniano says she became a citizen of a country she describes using the Spanish phrase, “un país de maravillas,” meaning “a wonderland.”

“I love this country,” Justiniano said. “I love the laws, I love the people.”

“When we traveled, because of my passport, I had to go to a different line [at the airport]. My family went to one side, and I went to another.”

In spite of the inconveniences, Justiniano did not rush into pursuing citizenship.

“When I came here, everybody asked me, ‘Why aren’t you becoming a citizen?’” Justiniano said. “But I think I wasn’t ready. I was nervous. I was insecure. I told my husband I didn’t want to be a citizen yet, I didn’t know English well enough.”

But encouragement from her friends and family changed her mind.

“They told me, ‘You can do it, you can do it!’” Justiniano said, and she found an English Language tutor a year ago. “She asked me what my focus was, and I told her I wanted to be a US citizen.”

Justiniano plans to celebrate the holiday in downtown Frederick, picnicking with family and friends and watching fireworks, dressed in the red, white and blue of her new country.

“Maybe I will paint my face!” she said, laughing.

More important to Justiniano than the food or the fireworks, however, is her family. She and her husband have two children, a 10-year-old daughter and a six-year-old son.

“My children were born here,” Justiniano said. “I want to be part of this country with my family.”

Porsche Cayman Re-style Is On The Way