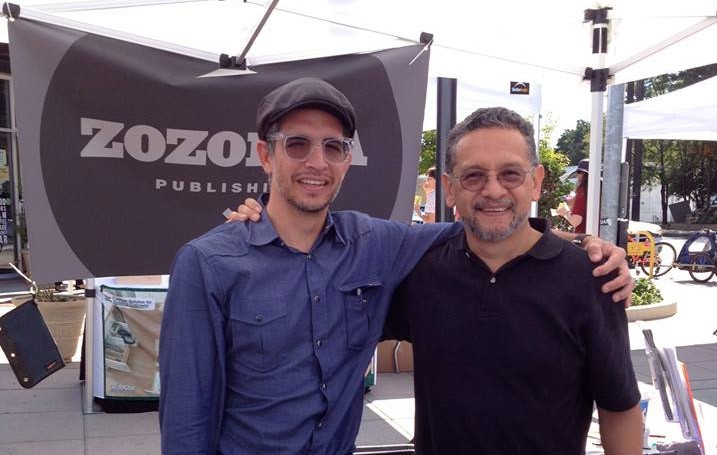 Six years ago, when Jose Ballesteros and his wife, Tara, were looking for a place to raise their family, they started by reacquainting themselves with Hyattsville. As residents of Washington, D.C., they had previously thought of it only as “that place between D.C. and IKEA … with that cool brewery.”

But when they saw other local, arts-based businesses popping up on Route 1, “it signaled to us that there was a cultural anchor here … it sealed the deal,” said Ballesteros. With the growing arts scene and the rich ethnic diversity of the area, they knew Hyattsville was the right place to plant their roots. They live in the Arts District with their two sons, Seamus, 6, and Camillo, 2. Now, Ballesteros is making his own contributions to the arts community as the founder of the area’s first bilingual press, Zozobra Publishing. He says that the company’s second book should be ready for publication by next summer.

Ballesteros is no stranger to moving around in search of home. He was born in Quito, the bustling capital city of Ecuador, and moved several times between there and the United States during his childhood.  In Quito, his parents and grandparents would take the family out to the country once in a while to escape city life. This back and forth between city and country (and countries) would become a great influence in his poetry — what he calls “emotional biodiversity.”

Eventually, he moved to the U.S. permanently. He studied at the University of Kansas, ultimately receiving a doctorate in early modern Spanish literature in 2005.

In 2002, during his doctoral studies, he was offered a faculty position at St. Mary’s College of Maryland in St. Mary’s City, so he and his wife made the move to the D.C. area. An associate professor of Spanish, he commutes there a few days a week so he can partake in city living and still enjoy country roads.

After a few years surrounded by esteemed literary figures at St. Mary’s, such as the late Lucille Clifton, he wanted to focus on his poetry and create an identity for himself outside of academia. His first collection of poetry, Lovedust/Polvo Enamorado, was published in March under a family nickname from childhood: Cacayo Ballesteros. “I wanted space between Cacayo and Jose,” he says, to create distance between his professional, academic reputation as “Jose” and the free, poetic spirit of “Cacayo.”

His poems are gritty and real, and create an emotional response no matter the language. “Mother’s Quilt se escribe con S de Switchblade,” published in Beltway Poetry Quarterly, moves between English and Spanish while still evoking the universal struggles inherent in coming of age. It’s clear that the writer struggles with dual identities: modern American man and traditional Hispanic man.

This love of poetry and language is what propelled Ballesteros to take on his next project: creating a bilingual publishing press dedicated to experimental poetry. He felt that much of the bilingual poetry in publication described West Coast, Chicano-centered issues, which didn’t represent the wide range of Hispanics and Latinos with different cultural roots and social concerns.

“I’m so happy to be a Latino in the U.S. where we can enjoy those perspectives and rich history,” he said, “but I wanted to propose an alternative to what was already out there.”

With these aspirations, he assembled a team of artists and translators and ultimately co-founded Zozobra Press in 2013.

The name has several meanings. In Spanish, “zozobra” means “anxiety.” The verb “zozobrar” means “to drift on the water.” And in the Central American dialect, “zozobra” phonetically translates into “you are art.”

Zozobra’s first publication, La Luz de la Tormenta/The Light of the Storm, is a 2013 collection of poems by Washington, D.C. poet Carlos Parada Ayala. The next project, says Ballesteros, will be a bilingual edition of an anthology of D.C. area Latino/Latina poets. Titled Al Pie De La Casa Blanca (Poetas Hispanos de Washington, DC), the anthology was originally published in Spanish. Ballesteros plans to have the book’s translation ready for publication by next summer.

“The goal of the press within the community is to support reading and writing,” says Ballesteros. He wants to target young Hispanics, who may already be translating oral and written English for their parents. He’s brainstormed with city officials about taking various ways of doing this, such as creating workshops in schools, and hopes that with their continued support, Zozobra can achieve its goal of engaging the youth in unconventional poetry and bilingualism.

“Imagine how empowering that will be for [children] and our community,” he said.

Streetcar 82 Brewing Company coming to Hyattsville, thanks in part to city program