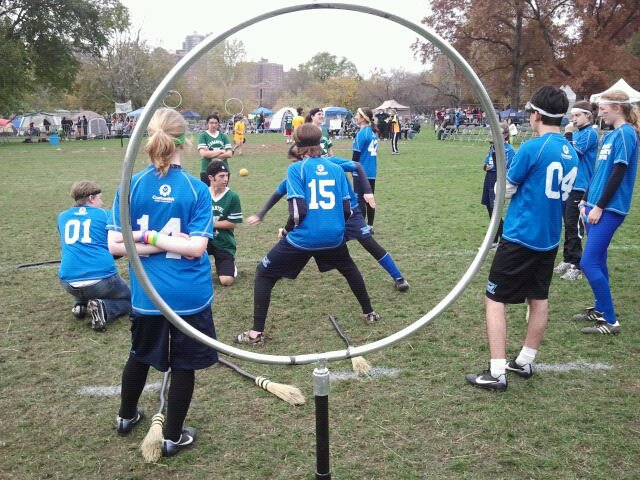 BY SUSIE CURRIE — The last Harry Potter movie has come and gone. But some local fans at Eleanor Roosevelt High School have found a way to keep the magic of J.K. Rowling’s phenomenally successful seven-book series alive.
The Roosevelt Ridgebacks, one of eight high school teams to compete in last month’s Quidditch World Cup V, took third place in their division.
In the books, Quidditch is billed as the sport of wizards, played on airborne broomsticks with three types of levitating balls in play. In 2005, students at Vermont’s Middlebury College adapted it for “muggles,” Rowling’s term for non-magical folk.


Since then, the sport has spread to 300 universities in the U.S. and a dozen other countries,  according to the International Quidditch Association. (Motto: “The Only Fantasy Sport That Will Make You Break A Sweat.”)
About 100 teams – mostly from colleges in the U.S., but also from Canada, New Zealand and Argentina, according to organizers – gathered in New York last month for the fifth annual Quidditch World Cup.
There was plenty to do between games; Ridgeback co-captain Matthew Williams described the festival atmosphere as “oddly similar to walking through the tournament in Book 4.”
He likens the game to a cross between rugby, tag, flag football and dodge ball. Play is on an oval field with seven members per team, and players must keep a broomstick between their legs at all times.
“It can be pretty vicious because you’re allowed to tackle,” says Roosevelt sophomore Ruby Dessiatoun, who was part of the tournament team.
Reading the books isn’t a prerequisite for being on the team, but it helps.
“I think you really have to be a fan,” said Dessiatoun, who is also on the school swim team. “People look at you like you’re insane when you say that you play Quidditch. You have to be able to say, ’I love Harry Potter, and this is who I am.”
The Ridgebacks, named for a type of dragon in the books, practiced two or three times a week to prepare. They were the only Maryland high school team to compete; at the college level, University of Maryland and Johns Hopkins University represented the state.
Williams and fellow senior co-captain Olivia Guerrieri started the team three years ago, after Williams learned of the sport while visiting his brother at New York University. Now there are 40 Roosevelt students who play, including some Hyattsville residents, with a team for each grade. The top 10 players went to the competition.
The next time the two co-captains attend the tournament, it will be as a Division I or II team (designations reserved for the collegiate level). Williams says he’s not the only one who made sure that colleges had Quidditch teams before applying to them.
His own first choice, Emerson, “has finished in the top 10 the last few years [of the tournament].”
Tags #Eleanor Roosevelt #Harry Potter #Quidditch #recreation
Previous

History of the trolley trail

From the Editor: North from Hyattsville