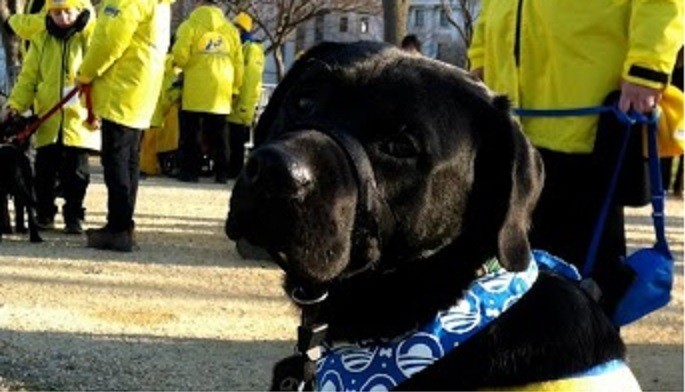 BY ROSANNA LANDIS WEAVER — Wearing a bright-yellow vest, Bernard joined his fellow pups from Canine Companions for Independence (CCI) in the 57th Presidential Inaugural Parade on January 21. Marching with the Hyattsville labrador retriever was his “volunteer puppy raiser,” Maria Boroja, and her husband Joe Skorupa, city residents since 2004.

Canine Companions for Independence (CCI), which trains and provides service dogs, was one of 60 organizations chosen to march from a pool of 2,800 applicants. When CCI received approval, they invited all puppy raisers and graduates in the Washington, D.C., area before extending the invitation to members throughout the country. In the end, 136 marchers and 56 dogs from 13 states joined the event.

Since the puppies are being raised to be service dogs, the puppy raisers’ job is to ensure “a happy healthy attitude and a good work ethic,” as well as a laser-like focus, says Boroja. Bernie’s training came in handy during the parade: He was able to concentrate even as he walked by hundreds of people calling, “Here doggy, doggy.”

“It was a really good practice for the dogs to be in that kind of cacaphonous environment, and to be around all those sounds and smells,” notes Boroja. “While they are with me, their job is to learn to focus.” Ultimately, when they go to a client, the dog’s appropriate response could save a life. 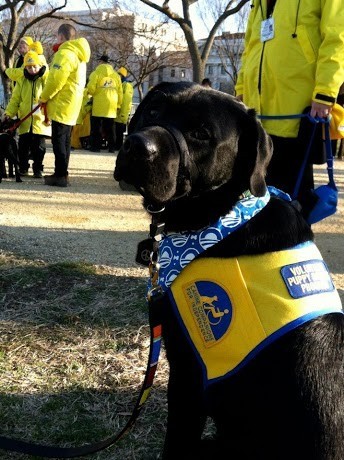 Just because the dogs kept their eyes on the trainers doesn’t mean they were unaware of their surroundings. Boroja reports that the dogs were very intrigued by elaborate feathered costumes of Wind River, the Native American dance troupe that walked in front of them. Some of the pups in particular were bothered by the piccolos played by the Navajo Nation Band that walked behind them. Still, the dogs marched in formation.

As for Bernie, she says, “He definitely knew it was something special. From the moment we all got on the bus [at the Pentagon, where the group went through security clearance], the dogs knew something was up.”

The marching was a small part of the day, with many hours of waiting, but dog and trainer didn’t mind. “There was a lot of time for Bernard to hang out with his fellow pups in training, and it was a beautiful day on the Mall.”

CCI focuses on dogs who work with disabilities other than blindness. If Bernie goes to someone whose hearing is impaired, he’ll be taught to get their attention when someone says their name, or any other sound of importance, even the jingle of accidentally dropped keys.

Or he might work in a rehab hospital, assisting therapists in their work with those who have suffered traumatic brain injury. He might be a skilled companion for an autistic child, or work with a wheelchair-bound person who has cerebral palsy or multiple sclerosis. According to Boroja, some dogs can even complete such complex tasks as putting a credit card on a counter.

“It’s just amazing what these guys can do,” says Boroja, “My job with the dogs is to teach [them to obey] about 20 basic commands and to socialize them and expose them to activities” that they could encounter on the job, she says. Training the pups is a 24/7 commitment: From the moment they are potty-trained (at about 8 weeks), they go everywhere with their trainers.

Bernie, the fifth puppy Boroja has trained, has lived with the couple since last February.

He will be leaving in August for additional training and evaluation at CCI’s headquarters in Medford, New York. She knows from experience that saying goodbye will be painful.

“Handing over that leash initially really does tear my heart out,” she says, “but handing that leash over to someone who needs that dog more than I do is the greatest gift I could ever give.”

To learn more about Canine Companions for Independence, the puppy-raising program, applying for an assistance dog, visit www.cci.org; or the local chapter’s page, www.capitalcci.org.