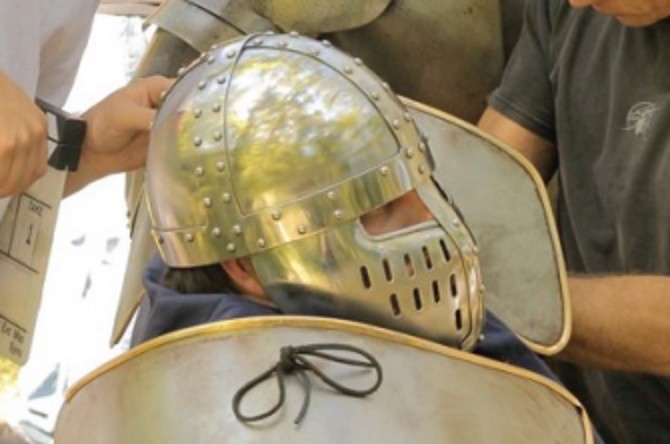 ||For his latest project, a web series that debuted on
Art

BY IVONNE OLGUIN —  Many of us love the excitement of sitting in the dark watching a movie and being taken to faraway lands or into the lives of others.

But for others, such as Hyattsville native Francis Abbey, the excitement comes from creating those stories. Abbey is an independent filmmaker whose fourth film project, “The Broken Continent,” may be his most ambitious yet.

Described as an “epic fantasy adventure web series,” the series pilot premiered to an invitation-only crowd on March 7 at the Landmark E Street Cinema, in Washington, D.C. On March 10, it became available on www.brokencontinent.com.

Set on the mythical continent of Elyrion, it tells the story of idyllic times ended by a king’s power over magic and the wrath of a god who

fractures the land into Five Shards – ever after known as the Heart, the Blade, the Crown, the Eye and the Fist.  Three millennia later, war rages as the struggle for power over the Shards has the various peoples of Elyrion battling for survival.

Abbey is a great fan of J.R.R. Tolkien’s “The Hobbit” and “The Lord of the Rings” as well as the HBO series “Game of Thrones.” His conception of “The Broken Continent” began with imagining a place.

“Geography is important in fantasy in general. In the case of my story, I had several major ideas and started creating the map. Then ideas started to come from the map itself,” he explains. “You figure out where certain people live and what kind of topographical features the land has, and those things help to fuel storylines and history.”

Much of Abbey’s own history lies in Hyattsville. Now living in the Arts District, he is attended both St. Jerome’s School and DeMatha High School before heading to the University of Maryland to study Spanish and Criminology. There, he was bitten by the filmmaking bug; his independent learning began in the college’s non-print media library and continued with a job at the campus TV station.

He went on to study at the Savannah College of Art and Design, in Georgia, earning a master’s degree in film and television. Since then, he has explored all facets of filmmaking.  He has acted, lent his voice to narrations and commercial voiceovers, and written scripts.  He added director and producer to his resume in 2008 with his first feature film, “Boxing Day.”

Hyattsville has served as location for a number of his projects. Scenes from “Chris & Carol,” his modern interpretation of “A Christmas Carol,” were shot off his apartment balcony overlooking Route 1.

“As an independent filmmaker, resources are very limited. So I’ve always written my scripts around my limitations,” Abbey noted.

For “The Broken Continent,” Abbey’s resources expanded considerably with  crowdfunding through www.kickstarter.com. An enthusiastic online fan base contributed $42,000 for a cast and crew of 80.  Recently, the team raised over $10,000 the same way, for post-production and promotional costs.