Hyattsville entrepreneur and content creator Patrice Cameau recently launched Black Girl Holidays, a 12 month calendar where every day of the year highlights an event, milestone, birthday or celebration that is centered around Black women. 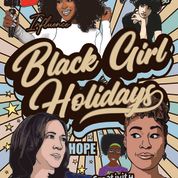 The dates range from when a historically Black sorority was founded to the birthday of an Instagram or TikTok star, Cameau said.

She began planning Black Girl Holidays in December 2020, and finished it with her team in about a month. There’s an IGTV video on Cameau’s personal Instagram account, @patricecameau, that chronicles the process from start to finish.

The calendar was released on January 19 of this year, the day before vice president Kamala Harris’ inauguration.

Cameau cited Harris as an inspiration for the calendar.

“Kamala Harris was elected as the first female, first Black, first Asian American, all these firsts,” she said.

Black Girl Holidays was put together entirely by Black women, Cameau said. She’s the creator, and the researchers were her mentees, who she known for years. The graphic designer, Sherrie Savage, shares her hair story — known as Naturally ILLustrated — through a series of black and white illustrations reflecting different hair types, according to her website.

“We really made sure that the content was true to who it’s for,” Cameau added.

Cameau said she enjoys seeing how people use Black Girl Holidays. She said she has an idea of what her product should be used for, but once it’s put out into the universe, everyone can use it for different things — different ideas that she never would have even imagined.

“It’s amazing, it’s humbling, but it’s also mind blowing, because people are so creative,” she added. “To see that this tool that I created is amplifying or helping them ramp their creative juices up is really cool.”

The Hyattsville community has been important to Cameau. Her husband grew up in the city, and she went to the University of Maryland in College Park. They also bought their first house in Hyattsville.

Cameau would frequently meet with content creation clients at Busboys and Poets or Vigilante Coffee, two other local businesses with locations in Hyattsville.

Three years ago, she opened CAMPspace on Gallatin Street, her greatest entrepreneurial project yet. It started out as a coworkspace, but after realizing most of the people using the space were women like her who were creating with digital communities, Cameau transformed the location into a content studio. It now includes a podcast studio and other content-friendly features.

“When I decided to open the cowork space, I would have popular cowork days in different venues along the Route 1 corridor,” she said. “I would pass our venue all the time — I would pass where we are now all the time, and I never thought that it could be where my business was.”

For others who want to start their own business, Cameau recommends beginning with figuring out what it’ll cost in terms of money and time. After that, she emphasizes being open to different possibilities.

“Don’t be afraid if it doesn’t work out the way you think it’ll work out, because it’s never gonna work out that way,” she said. “Take the first step and know that everything else is going to happen the way it’s supposed to.”