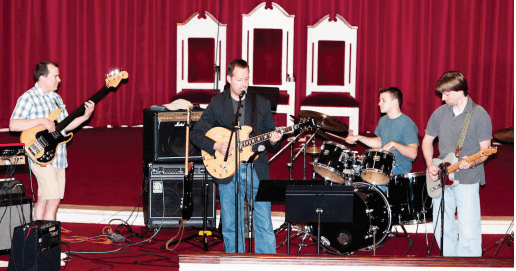 BY DAN HART — Can a band mix blues, folk, reggae, gospel, and a bit of country into a base ingredient of straight rock ‘n’roll and make it all work in just five songs?

With their new EP, Like A Freight Train, the Hyattsville-based Lonesome Valley Ramblers prove that this difficult task can not only be done, but can sound fantastic as well.

Lead singer and songwriter Curt Lucas, who has lived in Hyattsville since 1997 along with his wife and family, founded the band three years ago with friend and lead guitarist Daniel Rodgerson. The two met while playing worship music at University Baptist Church in College Park.

After performing regularly at venues such as the New Deal Café in Greenbelt and Mulligan’s Grill and Pub in College Park for two years, the Ramblers decided to launch a project on Kickstarter.com to help raise money to record their first album.

The band had “a wealth of original material,” said Lucas, and wanted to “expand our reach.”

The Ramblers’ campaign reached its goal of $3,000 last April. The band’s five-song debut was recorded, mixed and mastered at Airshow Mastering in Takoma Park last summer.

The Ramblers’ music is anchored in a classic-yet-modern rock sound, as demonstrated by the opening cut, “Lose Myself Somewhere.” It features an over- driven rhythm guitar and strong drumming, and as on all the songs, there’s never just one thing happening. Lucas’s vocals are delivered in a folk-style cadence, and the band’s brass section of trumpet and trombone provide backing that fills the song out nicely, particularly during lead guitarist Daniel Rodgerson’s country-twang solo.

The Rambler’s ability to seamlessly blend styles is further exemplified in the pleasantly haunting “Miner’s Prayer.” Led by a softly plucked banjo, the song’s atmosphere is transformed by the lush echo of electric guitars that seems to conjure the longing and loneliness of the miner in the lyrics. Rodgerson’s expertly picked guitar solos are especially striking when bathed in this resonant effect.

“Miner’s Prayer” is also an example of one relatively small detail that holds Like A Freight Train back from reaching its full potential: Curt Lucas’s vocal texture. At times, his voice comes across a bit thin in the recording mix, particularly when he sings solo. But when joined by backing singer Andrew Widman on songs like “Lose Myself Somewhere” and “Broken and Blue,” a fuller sound is achieved.

“Broken and Blue” is the CD’s signature folk number, but again, there is more here than meets the ear. A banjo leads things off, but drummer Paul Withers falls in right behind it to assure that the lilting beat stays firmly established throughout.

Once Lucas’s vocals get going, folk seems to meld into the blues: “Broken and blue since I fell for you / You were not there to pick me up… You took the bottle and left me with the cup.” A mournful slide guitar solo accentuates the mood, suitably accompanying the strongest songwriting on Like A Freight Train.

The CD also features two Christian-themed tunes. The first is the delightful “23,” which the lyrics quickly make clear is a reference to the famous Biblical Psalm.

The Ramblers’ musical dexterity is further displayed by the song’s reggae beat and ska guitar licks during the verses, which are later joined by excellent trombone and trumpet orchestration in the chorus, as well as yet another sterling guitar solo toward the end by Rodgerson. The title track “Like A Freight Train” is the second, a straight-ahead rocker that exudes a triumphant feeling of joy to match Lucas’s lyrics: “Your promise stretched across the sky / When the love of God hit me like a freight train.”

With Like A Freight Train, The Lonesome Valley Ramblers display great energy, versatility and talent in five compact and pristinely recorded songs. While its musical influences are apparent, it’s also clear that the band has carved out its own distinct sound with this recording. It’s a great start to what should be a bright future.

The Lonesome Valley Ramblers will perform at Mulligan’s Grill and Pub, on the University of Maryland Golf Course, on April 4 and May 9 from 6 to 9 p.m.