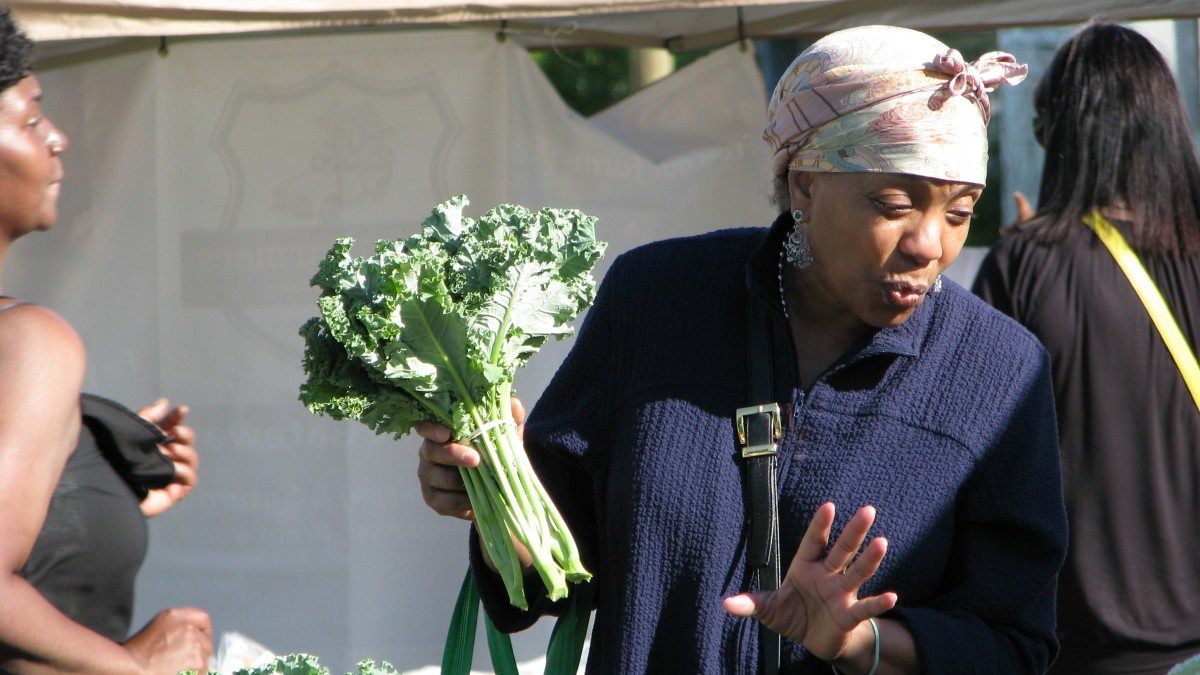 A market attendee shops for greens at 5 a Day CSA, one of the Route 1 Farmers Market and Bazaarʼs opening
Art

BY CAROLINE SELLE — What was once a vacant lot has been temporarily transformed into the vibrant and buzzing Route 1 Farmers Market and Bazaar. At the June 6 launch, local government officials and a handful of photographers were among the attendees who meandered through the various booths. Vendors sold handmade crafts and food while guitar and electric cello music wafted through the late-spring air.

Vendors included local businesses and artists Shabadaba Chic and Table Rustique. John Martin, a metal sculptor, displayed a table full of carefully upcycled junkyard finds, and Melissa Glasser displayed her paintings of dancers alongside some of Grayson Heck’s photographs. Hermione Rhones modeled some of her work as she sold it, including a crocheted halter top with a denim liner upcycled from a pair of old blue jeans.

From the looks of the line, Washington, D.C.-based blog and business The Timid Palate had one of the most popular setups. “Swirl, smell, and sip,” said founder Donna M. Taylor, teaching attendees the basics of wine tasting.

Jonathan Wilson, a resident of D.C.’s Trinidad neighborhood, attended the market with his two sons, who ate Rita’s Ice while he waited for a turn at Taylor’s booth. “I love open-air markets,” he said. “I find some of my best deals — and the best people.”

“I came here to buy vegetables and instead I bought wine,” said Kristy Malochee of Brentwood, laughing. Though she expected more farmers, she said, she wasn’t disappointed. “It’s exciting to see all this energy and creativity.” Vegetables were available from Dr. Vicki Reese of Beltsville’s 5 a Day CSA and at the organizers’ table, and two farmers were slated to be among the vendors Saturday morning.

The bazaar “was created to bring attention and visibility to all of the great organizations in the Gateway Arts District,” said Monica Buitrago, communications and marketing assistant for the Gateway Community Development Corporation (CDC). As part of the Art Lives Here campaign, the event seeks to raise the visibility of local organizations and artists. The bazaar was made possible in part by a $240,000 grant from ArtPlace America.

Previously, said Carole Bernard, executive director of the Gateway CDC, the site was filled with trash and sported barbed wire on one of the fences. “[We had] a vision about how you can bring the community together around a vacant space,” she said. The Corporation tried to diversify the space using different media, because “food, music, and arts transcend income, race, ethnicity and religion.”

In keeping with its goals, the bazaar’s site is full of art projects created by locals. Next to Taylor’s wine booth stood a structure called “Gleaning the Rains,” an artistic installation of rain barrels collecting water to feed a field of sunflowers. On the hill below the parking lot where vendors set up their wares, a series of bathtubs are planted with chard and hops for Catalog Brewing. The water will also be used by Catalog Brewing to make beer. Between the sunflowers and bathtub planters were a series of sculptures created by covering tires with astroturf. Over the summer, a teen summer camp at ArtWorks Now in Mount Rainier will install a mural on what is currently a graffiti-covered fence.

An endeavor in “creative placemaking,” the bazaar will be held first Fridays from 4 to 8 p.m. and every Saturday from 8 to 2 p.m. on the former B&J auto lot at 4100 Rhode Island Avenue in Brentwood.

Though the site is currently vacant, it is slated for development by Baltimore-based Landex Companies after the bazaar ends September.

Ultimately, the plan is to “turn this lot into townhouses or apartments,” said Howard Ways, executive director of the Redevelopment Authority of Prince George’s County. Meanwhile, he asked the crowd, “what better use for this spot than a farmers market and bazaar?”

Hyattsville Life and Times, 8 years ago 5 min read
Beyond Hyattsville

From the Vice President: Safeway closes chapter on an American way of life